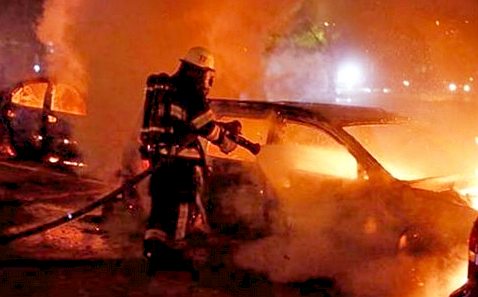 For three nights running, rioters have set cars and buildings on fire and thrown stones at the police in Husby and other culturally enriched suburbs of Stockholm. The local police now have a philosophy: “Let it burn, if no lives are in danger.”

The article below from Expressen talks about last night’s events in the banlieues of Stockholm. Notice that the ethnicity and religion of the “youths” are not mentioned, and when the police officer speculates on their motives, he studiously avoids any mention of JIM.

Many thanks to Heikki Polojärvi for the translation:

Police tactics: “Do as little as possible”

Police are on the scene for the third night in a row. On Monday night several people were arrested, and four were held for questioning. Now, the county police chief Mats Löfving talks about the tactics for Tuesday night.

“Our goal is to do as little as possible,” says Löfving in Primetime.

Unrest in Husby disturbed many on Sunday and Monday. Both the police and fire deputy have been on site. For the third day in a row the county police chief Mats Löfving has taken himself to Husby. Just before 23:00 on Tuesday night Löfving was interviewed on Expressen‘s TV show Primetime, and spoke about the tactics for the night.

“Our goal is to do as little as possible, to do as many normal things as possible [direct translation, checked]. So that this is left to our best friends — the people of Husby. There will be a normal police presence, and the normal presence of journalists,” he says, and continues:

“People are tired and want the Husby they can live in back. But there is a clique that sets cars on fire just to see the police and rescue personnel to arrive on the scene. Then they will throw stones and shoot with a green laser. I don’t understand the driving force behind this.” Löfving has several theories about the reasons behind the unrest.

“I have serious theories about unemployment and dissatisfaction with previous arrests, but also simpler theories that they just want to harass the police. But even if we have police uniforms we are also normal people. People don’t throw stones towards normal people.”

“Exhaustion at the desk”

About ten cars were set alight on Monday evening and during the night. Police held four for questioning, three suspected of violent riot, and one for violence against an officer. On Tuesday night the car burnings continued, this time in Jakobsberg, Tensta and Kista, among other places. And after a fire in Husby one person was arrested for arson.

“We drive to scenes, but are watchful when we arrive at the scene. If we see a car burning and no other cars or buildings are endangered, we let it burn out. This way we minimize the risk from stone-throwing,” says Lars Byström, the press officer for the Stockholm police.

“But if we see the risk of others suffering we rush in, you understand.” The last few days’ events have taken Mats Löfving on the site to see with his own eyes.

“At times I’m tired at the desk. I have spoken with police officers who have been working in Husby during the last few days and they tell me it’s hard work. That’s when I decided to go there, see for myself and speak with people.”