Our English correspondent Paul Weston has launched a new political party, Liberty GB. Regular readers of Paul’s essays will be able to guess that the new party’s platform is not… ahem… terribly congenial with mainstream political thinking in Modern Multicultural Britain.

Paul’s recent venture has led to confrontations with leftish persons on Facebook and other online discussion sites. His latest spirited exchange was with a woman who wrote an article for Searchlight, an organ associated with the free-thinkers and rock-throwers of Unite Against Fascism. His account of what happened is below.

The Left — Mad, Bad, or Criminally Ignorant?
by Paul Weston

The launch of my new party Liberty GB has been noticed by Searchlight magazine, which is linked to Hope not Hate and Unite Against Fascism. Searchlight is essentially a communist front operation disguised as an anti-fascist organisation. Its banner reads: “Fighting fascism and racism internationally for nearly fifty years”. 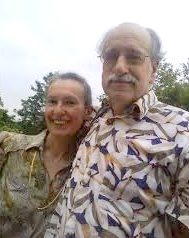 In the peculiar world view of communists, anyone who disagrees with them is a fascist, and anyone who recognises that far-left extremists are using mass immigration/ multiculturalism as physical and ideological pawns to fracture traditional (and capitalist) Great Britain will be smeared as a racist.

Searchlight’s Sonia Gable (wife of communist Gerry Gable) is most upset about Liberty GB. She stated the following in an article she called “Liberty It Isn’t”:

“Liberty GB’s politics are just more of the same old fascist rubbish. Claiming it is ‘working together [with whom?] to protect our British culture, heritage and freedoms’ it explains that: ‘the Liberal Democrats, Labour and Conservatives manifestly refuse to discuss the most important issues of our time, namely mass Third World immigration, the steady rise of fundamentalist Islam and the hijacking of traditional British culture and institutions by well-organised left-wing “progressives”‘. Enough said.”

This initiated a series of comments between us. Readers can decide as to whether leftists like this are insane, evil, or just criminally ignorant:

Anyone with time on their hands, especially psychiatrists, may care to Fisk her comments…

Paul Weston is a British-based writer who focuses on the damage done to Western Civilisation by the hard left’s ongoing cultural revolution, which seeks to destroy the Christian, capitalist and racial base of the West. His political Facebook page can be found here.