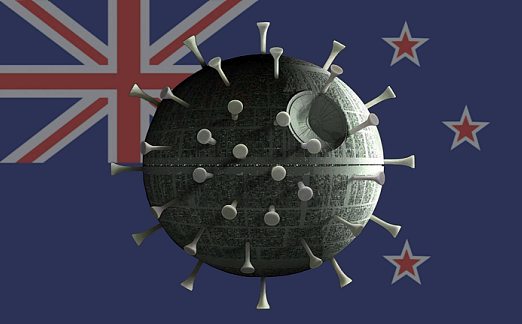 The new totalitarianism that has descended over the Western world in the last two years varies in its intensity and emphases. New Zealand has one of the most repressive Corona regimes, right up there with Australia, Germany, Austria, Greece, and Canada.

Even though New Zealand has almost no COVID cases, Prime Minister Jacinda Ardern has imposed a draconian and finely-tuned lockdown on the populace. The government is vigorously pushing citizens to get vaxed. Ms. Ardern has stated in no uncertain terms that the populace will from now on be divided into two classes, the “vaccinated” and the “unvaccinated”, with the unvaxed having a more restricted set of rights and privileges. The prime minister’s approach makes sense, given that she was groomed by Klaus Schwab and the World Economic Forum as part of the “Young Global Leaders” group (as previously reported here and here).

The following account comes from an unvaxed young man named Scott. As a pureblood in max-vaxed New Zealand, he is now feeling the chilly winds of repression on a daily basis.

This report concerns his experience with the country’s healthcare system. The medical establishment Scott visits is a medium-sized clinic with mostly female doctors, which has segregated its clientele and relegated him to the back of the bus — or rather, the back of the ambulance bay:

One incident, the most recent and certainly a pretty indicative event, sums up the situation well. Something fairly innocuous yet foreboding.

Sitting there in the ambulance bay out back waiting for my medical appointment — yes, that’s right, in the ambulance bay — I wasn’t terribly bothered. I’d made an appointment earlier in the week and was told over the phone that because I was unvaccinated, my doctor would see me out the back. Oh, OK, I said, thinking some sterile room at the back of the building. But no, it was actually outside at the back. Segregated, I guess. But still… OK, I said.

Still not really bothered. Not until I was there in the bay, in my designated spot, and had spent some time, no idea how long, maybe fifteen minutes or so. Well, I began to think how this could make some people feel. And also wondered if this was really for reasons of health, or was it psychological and done to deliberately exclude and probably humiliate and degrade people? Wear them down.

Jacinda certainly had said there will be two classes of people going forward, vaccinated and unvaccinated. So to degrade certainly fits in with her own words. It made me think further, though. How far will this go? How far can it go?

And although it really didn’t bother me much at all, should I let on to that fact? Or do I faux-scream out that this entire situation hurts too much?

If someone being tied up and tortured for information feels that the pain he’s feeling is actually really light and quite tolerable, and not near the breaking point, what should he do? If the torturer realizes it, then obviously the pain will be turned up several notches. So, quick — cry, scream and act as though you simply cannot endure any more of this, it’s so excruciating. And he thinks, any information the victim had would surely have been revealed. No? When actually it’s not much bother personally to this individual at the moment.

I’m now starting to understand situations such as what people did to other people in World War Two. I’m beginning to understand just how levels of that sheer evil sadistic brutality come to exist.

People close to me are complying with the rules, following everything to be letter, believing they’re uniting together, as the “Team of Five million” campaign says. Unquestioning obedience is what I see. And for a while early in this crisis I did the same. They do see that far, the people I know, but they still accept it now, that because of this once-in-a-lifetime crisis, measures like this simply must be taken.

I’m at the point of screaming inside now, obviously. Because of what’s happening to others, and the way I feel they’re being slowly and subtly manipulated. Very smart, intelligent people who simply can’t see these certain subtly manipulative psychological aspects.

But then I turn to myself and think: Really? Is it true or am I seeing some imagined spectre?

After all I’m not highly educated, probably not that up-to-date with current local events as I might be, and have come to these thoughts on my own and in my own mind. So am I slightly paranoid and turning into some conspiracy theorist? Well, I don’t know; it’s not for me to ultimately judge that.

Because I don’t want it all to be true. Really, I just want to be wrong. I’ve even tried to prove myself wrong several times. Maybe I didn’t try hard enough. I have to let history be the ultimate judge.

I’m not tapped into the anti-vaxx movement. I’m not involved in any social groups, media or otherwise. Not marching or protesting. Only sitting here and observing. Which then gets me thinking. Thinking and thinking about what’s happening, and why.

I really initially just had some concerns about things, many things that were happening, and that simply weren’t being addressed. Which only led to more mistrust and scepticism. I’m watching and seeing what one side does and how the other side reacts.

And this is now what terrifies me.

22 thoughts on “A New Zeal for Repression”