Our German translator Hellequin GB was in Rwanda at the time of the genocide in 1994. In the following essay he points out the disturbing parallels between the Hutu propaganda of that time — which demonized and dehumanized the Tutsis prior to the slaughter — and what we read in the left-wing media (is there any other kind?) in 2021. 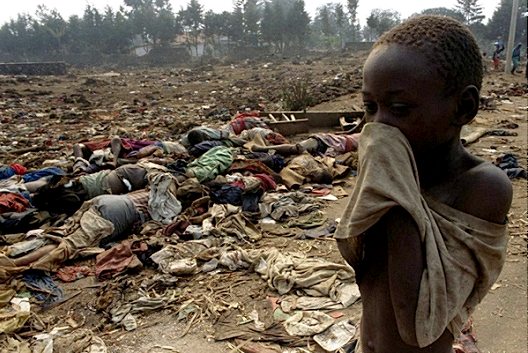 About Rwanda and the Genocide Propaganda

Two major radio stations transmitted hate propaganda to the illiterate masses: Radio Rwanda, and Radio Télévision des Milles Collines (RTLM). Radio Rwanda was the official government owned radio station.
Under the second(?) Arusha Accord it was banned from continuing to disseminate hate propaganda. This led the Hutu Power circle around President Habyarimana and his wife to found RTLM as a private radio station.

RTLM became immensely popular as a young, hip alternative to the official voice of the government. They did the usual — played popular music and encouraged the public to phone in and participate in radio broadcasts. Amongst its listeners, RTLM attracted the unemployed youth and the Interhamwe militia, a Hutu paramilitary organization.

RTLM and Radio Rwanda, before and during the genocide, continued to encourage and direct the killing of Tutsis and moderate Hutus until they were forced off the air by the Rwanda Patriotic Front’s military victories.

Here are a few transcripts in English from the Radio/TV-shows in Rwanda 1993/94. The rest is in French and Kinyawranda, but that should give you enough insight into what was going on.

The next ones are those that come from the nitty-gritty, although there are some serious time-lapses in between.

Also, when you read the word Inyenzi, that means cockroach (Tutsi). There was an article in one of the papers; I cannot remember its name now, but the headline stuck with me throughout the years:

“A cockroach cannot bring forth a butterfly.”

The editorial argued that the Tutsi, like a cockroach, use the cover of darkness to infiltrate: “the Tutsi camouflages himself to commit crimes.”

Another word you’ll read is Inkotanyi, which means “invincible”, and is the nickname given to the Tutsi rebel army, but it was also used in the connection with “Cutting down Tall Trees”, meaning killing Tutsi.

Like the Nazis did to the Jews of Germany and later in the occupied Territories, and what we’re seeing now, was and is a build-up to genocide, in my humble opinion.

This time it’s just on a monstrous scale never seen before in recorded human history.

And to provide some “balance”, Radio Muhabura (Radio Beacon) was the official radio of the Rwandan Patriotic Front.

After you’ve read through some of these, I’m sure that you’ll agree that for genocide to occur, it must be preceded by the dehumanisation of a group. To dehumanise means to deny the humanity of someone, reducing them to sub-humans, and that is what I certainly hear out of the mouth of every government and their mainstream media mouthpieces about those who are refusing to take part in this “medical” experiment. Also, no amount of “ethical and moralistic” gymnastics on their side will change these facts.

The crime of genocide is, after all, a 20th-century invention — and a mighty mobile one at that, as we see right now in front of our own eyes. But that is a “conspiracy theory” according to those who are perpetrating the crime this time. And looking at “Their” track record… we need some new conspiracy theories pretty fast, since all the old ones come true in front of our own eyes — at least for those who actually have eyes and a mind to see.

I haven’t, for obvious reasons, read through all of these documents. The few that I did read were enough to give me some sleepless nights.

Don’t get me wrong: I’ve no nightmares about those bastards I took out, it’s those that I couldn’t save, and had to impotently watch — from hiding — being slaughtered by propagandized, hate-filled zombies.

20 thoughts on “We Are All Rwanda Now”