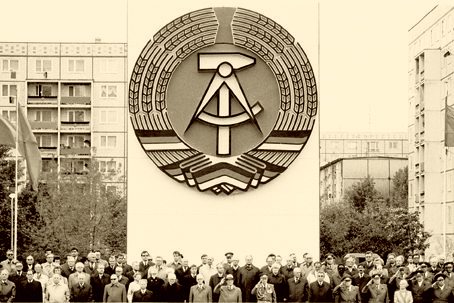 The following video discusses the last totally controlled election in communist East Germany, which took place in 1989. Nash Montana, who translated the clip for subtitles, includes this introduction:

This video is an excerpt from a ten-part German documentary television series entitled “Damals in der DDR”. It was produced by MDR, WDR, and LOOKSfilm, and was released in 2004. The series uses contemporary accounts to report on life in the German Democratic Republic (East Germany, Deutsche Demokratische Republik, DDR) from 1945 to 1990. The short (three-minute) clip from the documentary that I translated shows how elections were held in the DDR.

It was simple: ballots were pre-printed with one candidate per position. No pen was needed to mark a candidate since there was no choice. Voting was mandatory. Repeated refusal to vote ended in prison sentences of up to ten years.

West German television showed instructions on how the ballot had to be folded and dropped in the box. It explains that write-in candidates or crossed-out candidates, were still counted as a yes vote for the original candidate listed on the ballot. There were no clear rules on when, or how, a ballot was counted or discarded as invalid. That is how the DDR accomplished a 99% voter turnout for the SED (Sozialistische Einheitspartei Deutschlands, Socialist Unity Party of Germany) candidates.

The SED was the Socialist Unity Party of Germany. The DDR was a one-party regime. A few other institutional popular-front parties were permitted to exist in alliance with the SED, for example the Christian Democratic Union, the Liberal Democratic Party, the Democratic Farmers’ Party, and the National Democratic Party.

(You know, kind of like the DNC here, which reigns supreme over the other front party in alliance with it, the GOP.)

It is often said that in order to imagine what the future might bring, one should look to the past. Certainly this is now more true than ever. That’s why we have to hurry and burn every book, censor every opposing opinion, alter every Wikipedia entry, and keep children from learning history, so that they may immediately repeat it. Because it was so good the first few times around.

After all, “A generation that is not taught to recognize the irreconcilable differences represented by the Declaration of Independence and the Communist Manifesto, between Madison and Marx, the Federalist Papers and Rules for Radicals is doomed to be ruled, not to rule. Individual liberty will not survive in a republic of civic dunces.” (SFExaminer, 2011)

There is one looming question in my mind that I haven’t quite yet been able to wrap my head around: Just how did the USA become the most highly prized, biggest buck with the greatest number of points on his rack, to be slain? How did the old make the connection to the new? When and how did the Comrades of the Old World decide to infiltrate our country, and who were all the figures in the shadows? …all that stuff.

But here we are.

All I know is that if the USA falls into Communism, then Brave New World meets 1984 meets Fahrenheit 451 meets Minority Report meets Sci-fi futuristic technology and surveillance pre-cog totalitarianism. Then the rest of the globe will fall, too, and Global Totalitarianism will become our future.

Because those books were warnings, not instruction manuals. But even the authors of these books didn’t quite comprehend the entire, gigantic beast that will rear its ugly head in the coming years (no predictions! Otherwise I’ll have to back it up with facts). How could they?

I fear we are at the beginning of repeating history, but this time they’re going to do it right. They’ve had enough time to practice. They figured out where to slay that prized buck just right, and they have executed their plan flawlessly with the election on November 3.

Do I think I know what is happening right now? I have a pretty good idea. I see the same bad actors from back then are involved in the Grand Endgame now. Different faces, same animal. Mostly it’s old rich white men. And some are actually even physically transcending, such as George Soros (born in 1930), and Klaus Schwab (born in 1938). Give them a fluffy white kitten to sit on their laps, and we’re golden.

What I do know, most of all, is that we are just at the beginning of all of it. The Great Reset and all that. It’s only just begun. And no one, I repeat absolutely no one in lower level American politics, not one DNC or GOP senator or house member, none of the usual suspects and functionaries, will get a seat at the table of the big guys running the show. They may dream about it, and think that the “work” they’re doing to advance the Global Reset will get them there next to the Iron Throne, but it won’t.

President Trump was the monkey wrench we threw in their works. And we did everything right. And for his reelection, we all showed up, and we were out there, and we voted, because we thought that his margin of victory would be greater than what they were prepared to deal with in order to steal the election.

We the people can’t be blamed for anything. It’s just that in the end, they had four years to plan for this election, all the while side-tracking us with their ‘oh look a squirrel’ impeachment theater and all the other stuff with which they managed to steal our attention while they planned the biggest heist of all, this election, right from under our noses.

On a scale from 1 to 10, how hopeful am I that Trump is going to pull this off before GrayManBad™ is sworn in on January 20? Currently, I’m at a 2.

And that’s me being optimistic.

And that’s where I am going to leave it, because opinions are like — you know — everyone has one.

2 thoughts on “The More Things Change, the More They Stay the Same”