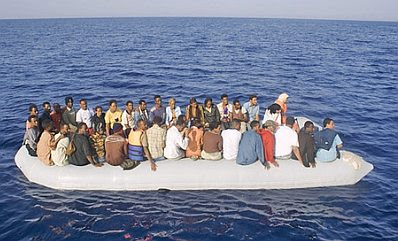 Frontex calculates that in 2018 alone, with a historic record number of arrivals, the Moroccan facilitators earned €105 million

The more obstacles, the more money. Border control causes more troubles for migrants, but at the same time, an opportunity to do more business for the human traffickers. The European Agency for Borders (Frontex) calculates that the networks of facilitators [smugglers] in Morocco have pocketed €159 million in the last three years organizing crossings in small boats through the Strait and Sea of Alboran [the westernmost part of the Mediterranean, between Morocco and Spain]. The most profitable year was 2018, when a historic record of more than 57,000 arrivals by sea were recorded, and the traffickers increased their turnover to more than €105 million.

The networks in Morocco recovered a business opportunity at the beginning of 2017, parallel to the increase of migratory pressure in the direction of Europe. Until that time, Libya had been the principal point of departure in the African migratory route to Europe, and their militias combined the armed fight with the business of immigrant traffic. In mid-2018 the policy of closed ports on the part of ex-minister Matteo Salvini and the forces of the EU in financing and forming Libyan militias like the coast guard bore fruit, making the route more expensive, and the flows ended up shifting to the western flank of the Mediterranean.

This shift involved a “significant increase” in the entry of human trafficking networks in Algeria and Morocco, according to Frontex and their recently-published annual report of risk analysis. Specifically, the networks that operate in Morocco, the country of departure for a large part of the migrants who reach Spain, pocketed about €35 million in 2017, and the following year, increased their income to €105 million. Last year, when illegal immigration had already fallen to half that in 2018, the networks’ profits were reduced to €19 million.

The calculation by Frontex takes into consideration the fees reported by those migrants who could be interviewed on landing and the flow of arrivals. It is an approximation, because, as indicated by the agency itself, it becomes more difficult to examine the profits of the Moroccan and Algerian networks due to the quantity of variables which can alter the fees. The agreement with the traffickers can include just the trip in small boat, or also a plane ticket or safe housing where they wait for departure and food. The demand, the means of transport utilized, (toy boats, motorized boats, or zodiac [inflatables]), make the agreement more expensive or cheaper.

The point of departure and nationality of the migrant also influences the fee. The Moroccans, who know the terrain, can manage the trip themselves without paying traffickers, while the sub-Saharans mostly need them. Although the agency omits it, the cost of the trip also depends on bribes for local officials.

The 2019 totals draw attention because they involve a loss of income (from €105 million to €19 million), much more than the drop in arrivals. A Frontex spokesperson explains that it is a “conservative” calculation taking into consideration various factors such as the lack of data and the fact that the totals reported were much more variable than other years. Besides, 2019 was characterized by more border control by the Moroccan authorities, which especially affected the sub-Saharans. “We took into account the fact that the percentage of sub-Saharan migrants (who pay higher fees) decreased, while that of Moroccans (who pay much less or nothing) increased,” notes the spokesperson. A less conservative calculation, he adds, would raise the total profits between €30 million and €35 million.

The agency, which often points out the enormous flexibility of these networks to adapt themselves to each new scenario, notes that the number of facilitators involved in these activities has increased, “especially those who come from the same countries as the migrants.” Frontex predicts that the traffickers will begin to diversify their businesses. “In the future, these criminal networks could expand their illegal activities to other crimes such as money laundering, corruption, and smuggling,” states the document.

In recent months, emigrating from the north of Morocco has become harder and more expensive. The EU and Spain financially and diplomatically support the country in exchange for better border control. According to Frontex, Morocco detected more than 27,000 illegal migrants and dismantled more than 60 human trafficking networks in 2019. Rabat, which often gives out much greater numbers than those of the EU, claims they have rescued 19,554 migrants in the sea en route to Spain. Their harassment of the migrants has increased the fees on the route.

As the prices of the Western Mediterranean route increased, a growing number of migrants have found them “unaffordable” and look for “alternative routes”, Frontex warns. This is happening. The Atlantic route to the Canary Islands has been reactivated after a decade of being sealed, and in spite of being the most dangerous — at least 89 persons have died trying to cross it so far this year — it is what the migrants with less resources are able to pay.

6 thoughts on “People Smugglers Cash in on the Spanish Route”