For the a change of pace, here’s a new pastiche from JLH, who has a knack for this sort of thing. 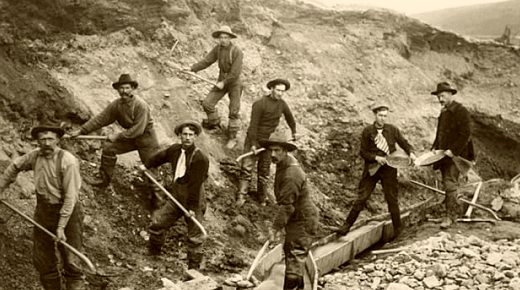 The Strangulation of Democracy

by JLH
(In memoriam Sam McGee, and thanks to Robert Service)

There are strange things done in the Silicon sun
By the men who spin the gold,
And the cyber trails hold their secret tales
That could make your blood run cold.
The city lights have seen bad sights.
But the worst they ever will see:
Is not far away from San Francisco Bay,
Where they’re strangling democracy.

Now the men gathered there are from everywhere —
But they are here, we all know why.
They all play the game and their goal is the same —
A slice of the American Pie.
Oh, the wages of sin! They are raking it in.
The billions come rolling along.
To the wealthy comes power, and now is their hour
To buy the world for a song.

But it’s not simply greed, there’s also the need
To determine what’s good and what’s bad.
If you’re not in their group, then you’re out of the loop,
You’re as old as yesterday’s fad.
Join the crowd, show your face, tell us what you embrace,
Give a glimpse of your shy little soul.
This service is free, no psychiatrist’s fee,
Since you’re telling the world as a whole.

It’s a magical realm with no one at the helm.
Your entrails exposed on the ground
Attract the trolls first, and they’re not the worst;
Carrion-eaters in this place abound.
And so you’ve been shilled, your guts have been spilled,
And the vermin crept into your life.
There’s no magic spell to conquer this hell.
Just chill out and witness the strife.

Sit back and relax, pursue some fun facts,
But be careful what questions you ask.
Algorithmically speaking, the answer you’re seeking
May incite a tortuous task.
Seek President Trump, and you may soon be jumped
To trumps in the game of Whist.
Should you next try to reach for freedom of speech,
You may find yourself on a list.

“List of what?” you inquire. “ I’ve done nothing dire —
Turned my library book in late.”
Oh, racism, bigotry, trans-gender misogyny,
Thinking about talking about hate.
You’d better re-think, look up Capitalism stinks!
Find some comrades among the elite.
Just be a bit leery when standing near Siri,
And know Alexa stores and repeats.

Should any opinion offend cyber minions,
You will slide right down a black hole.
Wherever you go, the watchers who know
Won’t touch you with a ten-foot pole.
So where have you gone, and then, for how long?
Only the Shadow knows.
You just haven’t played by the rules that they made,
So you’re shade from your head to your toes.

Said Mark Twain with a sigh: You know figures can’t lie,
But liars can figure quite well.
Algorithmetic can just make you sick.
It’s like trying to swim in a gel.
They play numbers like bugles, the Facebooks and Googles,
With self-satisfied bravissimo.
At the end of it all, your thousand “friends” are appalled,
You’re persona non gratissimo.

Strange things go on in Silicon,
Among the men who vie for power.
Electronic brains weave cyber chains
That encircle us hour by hour.
They know what’s best for deplorable pests,
And they’ll teach us civility.
Their smiles are serene as their Marxist machines
Are strangling democracy.

5 thoughts on “The Strangulation of Democracy”