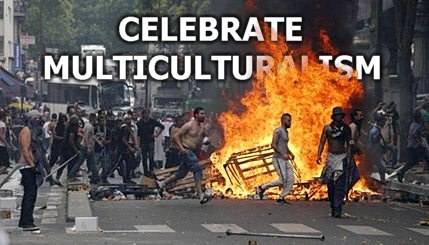 The following essay is pretty inflammatory; but as we have all seen, acting in a nice, civilized, restrained, and decent manner towards a Hitler or a Stalin, and never saying out loud what is actually going on, only leads more quickly to our own doom.

The EU and America’s Democrats are two sides of the same coin.

Political correctness / culture wars / political Marxism began in Europe. Initially, it was a not unreasonable response to the powerful people (the aristocrats and tycoons) using their power to reward their friends, while keeping “the little guy” from being able to advance and earn a decent living. In Eastern Europe it developed as violent Communism. But Western Europe was different, in that it consisted of many individual, highly developed, independent nations. In each of these nations the struggle was between Conservatism and democratic Socialism. Both were nationalistic. But then Hitler brought things to a head by using Conservative Racist Nationalism to try to dominate the world.

World War Two brought about a Darwinian change in Europe. The most aggressive and militaristic Europeans died in the fighting. The survivors were the ones who were the most wimpy and pacifistic. They were determined to bring about a socialist utopia. Their first goal was to ensure that any Hitler wannabes could never again gain power. So they began a never-ending struggle against nationalism, militarism, capitalism, Christianity, and “white supremacism”. As a counterweight to Christianity, they promoted Islam as “the religion of peace”, especially because most of its adherents were non-white. To do this they had to delude themselves about the true nature of Islam, but they did it happily. Pretty soon they invited Muslims from nearby lands to emigrate to Europe, so that they could dilute the remaining native white conservatives, and they even subsidized the Muslims with welfare payments to make it easier and more attractive to them.

And so we end up with today’s situation in Europe: hordes of unassimilated, Christian-hating Muslims living in no-go zones, most receiving welfare, and committing crimes in the name of Jihad (terrorism, rape, etc.) while the “progressive” governments make excuse after excuse for them (they are unfamiliar with our culture, they are not practicing “real Islam”, they bring more benefits than losses, etc., ad nauseam). And naturally, if you are crazy enough to point out how insane this all is, they will inevitably ruin your life (shades of Stalin).

The situation in America is “same song, different verse”. The “progressive” Democrats got off to a later start, and had to overcome a larger Republican opposition. In contrast to Europe, they had to resort to importing Latinos, who could just walk here from Mexico, instead of Muslims, who had to fly here from across the ocean. But now they are within striking range of their goal, and soon we will have Medicare for all, universal gun control, and reparations for slavery; all in a government where Trump is replaced by “the Squad”.

America becomes Mexamerica, and Europe becomes Eurabia. And everyone lives happily ever after.

7 thoughts on “Culture Wars International: EU There and Democrats Here”