It seems that the Canadian government is looking to suppress what remains of independent journalism in the country by further regulating content on the Internet. The Canadian Radio-television and Telecommunications Commission (CRTC) — which is melded with the CBC in some mysterious fashion — has submitted its recommendations to the government for changes to legislation governing telecommunications and media in Canada.

Ezra Levant thinks they will use it to shut Rebel Media down:

A brief snip from the MobileSyrup report may be found atPuget Sound Radio:

The Canadian Radio-television and Telecommunications Commission (CRTC) has formally filed a preliminary submission to the panel responsible for reviewing the country’s broadcasting and telecommunications laws.

The CRTC’s January 10th, 2019 filing comes one day before the January 11th deadline, and urges that any new telecom legislation proposed by the Broadcasting and Telecommunications Legislative Review panel should focus on “outcomes that will benefit Canadians in an era of hyper-connectivity by optimizing competition, enabling affordable and innovative services and extending these services and the facilities necessary to access them across the country.”

The Commission’s use of the phrase “optimizing” is explained by its belief that “varying degrees of competition” have already been introduced to Canada’s telecom market.

According to the CRTC, new broadcasting legislation should encourage the production and consumption of Canadian content (CanCon), while also ensuring that all participants in the country’s broadcasting industry should “participate in appropriate and equitable—though not necessarily identical—ways to benefit Canadians and Canada.”

A lengthier report was published by The Star. Some excerpts are below:

What that share looks like, however, remains uncertain as the federal government moves to tear down and rebuild the country’s broadcast and telecom regulations.

In written submissions to a seven-member panel, both the CRTC and the Canadian Broadcasting Corporation also called on Ottawa to create new rules that encourage news content distributors to deliver accurate and trustworthy information to Canadians.

The submissions, which were due Friday, are part of a wide-scale review of Canada’s Broadcasting Act, Telecommunications Act and Radiocommunication Act that was started last June by a panel of experts chaired by former Telus Corp. executive Janet Yale.

“What we’re asking for are new and different powers to regulate in a different way,” Scott said in an interview with The Canadian Press. “It doesn’t mean more regulation. It means smarter, better, flexible regulation. A new toolbox.”

The CRTC has asked for explicit statutory authority and flexible mechanisms to regulate audio and video services, both foreign and domestic, including online.

That would help the regulator ensure that any service provider making money from Canadian viewers and listeners also somehow pays toward the creation and distribution of Canadian content, as domestic broadcast companies do now.

Currently, traditional broadcasters in Canada contribute millions of dollars to bodies including the Canada Media Fund and directly pay for original Canadian productions.

But a shift by Canadians to viewing content online has eaten away at funding models that rely on subscriptions and advertising revenue.

Scott said regulators need the authority to reach agreements with new digital platforms to ensure they contribute “equitably” to the creation of that content.

The CBC’s submission Friday was nearly identical in tone, saying the government needs to ensure that digital companies profiting from the Canadian cultural marketplace also help pay for the creation of Canadian programming.

It also called for mechanisms to ensure Canadians have access to “trusted news and information” through entities including Google and Facebook.

I tracked down the PDF of the “CBC/Radio-Canada submission to the Broadcasting and Telecommunications Legislative Review Panel” at the CBC website. It’s a monster at 46 pages and 29MB; however, most of that space is taken up by lavish color graphics, so it’s not quite as long as it seems. There’s also a lot of repetition; nevertheless, the core material consists of dense PC/MC bureaucratic bumf that demands a lot of determination and caffeine to slog through.

I’ve only made a preliminary survey of the contents, and will simply present some of the highlights here. First, the Executive Summary:

Canadian culture and democracy are at a crossroads. We have seen how forces in the digital world can undermine Canadian news and information — essential ingredients for a healthy democracy. The dominance of global entertainment threatens to drown out Canadian stories and perspectives. The economics of foreign digital giants make Canadian culture more difficult to fund and sustain. As the public broadcaster, we are very concerned about the health of the broadcasting system and its continued ability to serve the needs of Canadians. We are also concerned about our ability to properly fulfill our responsibility to nurture and promote Canadian culture. We believe that strengthening public broadcasting is critical to ensuring a strong Canadian culture and a vibrant democracy. That is our focus in this submission to the Broadcasting and Telecommunications Legislative Review Panel.

Our competition is not Canadian companies, but the global digital giants flooding Canada with foreign content.

OK, we’ve got to beware of foreign content; that’s the first point. Based on how repressive the HRCs and the CBC are in Canada, one must assume that a major part of the problem is that Canadians are being exposed to massive quantities of “hate speech”, “xenophobia”, “Islamophobia”, and all those other dangerous forms of expression carried by foreign sources on the Internet.

But it’s also about money. With foreign content burrowing its way into Canadian households, beating out the local competition, the government is missing out on some of the revenue it would normally extract from citizens when they access news and entertainment.

Those two major purposes are wrapped in a suffocating blanket of PC cotton wool, as exemplified by the boilerplate contained in these bullet points:

The submission’s Recommendations make the CRTC’s purposes more explicit (items of particular interest have been bolded):

But the devil is in the details. The document utilizes a full palette of those fluffy politically correct words that are so beloved of technocrats in the Modern Multicultural West — “investment”, “equitable”, “flexible”, “sustainable”, etc. Words of fuzzy meaning that Canadian bureaucrats can interpret and reinterpret to meet the needs of the moment — in this case the need to acquire more cash, and the need to exercise greater government control over the Internet, so that Canadian citizens will not inadvertently think forbidden thoughts.

Consider these two paragraphs of detail about the Recommendations, from page 45. First, a requirement that forbidden content be blocked:

Add a section to the Broadcasting Act permitting the CRTC to issue orders requiring Canadian telecommunications carriers and telecommunications service providers, including ISPs to take actions designed to support the implementation of Canadian broadcasting policy objectives such as the blocking of websites used for piracy of programming or content that is manipulated, including news.

Notice the word “manipulated”. That can cover a lot of things — Russian bots, for sure, but also any type of information that has been labeled “fake news”. Any material that the government doesn’t like can be pushed into the “manipulated” pigeonhole and blocked.

There are other legal instruments to make sure that Canadians receive news that is accurate and not misleading. For instance, every Canadian citizen can avail itself of either their provincial Defamation Act or general responsibility regime to file defamation lawsuits against false and misleading news or information. The Criminal Code of Canada also has a prohibition against hate speech.

Those two paragraphs, taken together, should suffice. Once the legislation is crafted, government apparatchiks should be able to shut down any forbidden speech at any site on the Canadian internet.

They explicitly intend to target foreign service providers in pursuit of their goals. How well that will work is an open question. They may run into problems trying to regulate ISPs in the USA, at least while Donald Trump is in office.

Given that Justin “Baby Doc” Trudeau now sits on the peacock throne in Ottawa, the proposed legislation should pretty much be a done deal. I assume it will be rubber stamps on Parliament Hill from here on out.

There’s wealth of material in the CRTC submission that readers may data-mine at their leisure. I’m sure y’all can unearth even juicier bits than the ones I’ve presented here.

One final note — the following graphic from page 20 really warmed my heart. It shows a comparative graph of per-capita government expenditures on Public Service Broadcasting in various countries: 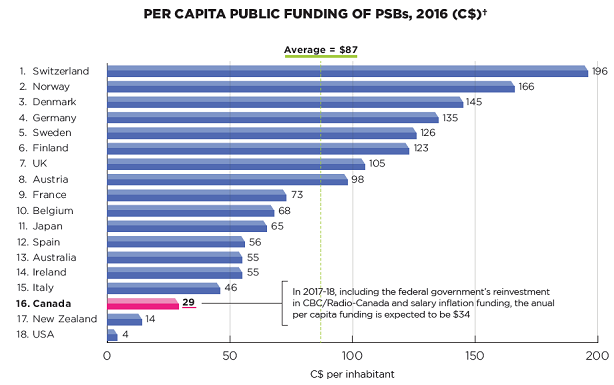 The USA comes in dead last. And look how far Canada will have to go to catch up with Switzerland!