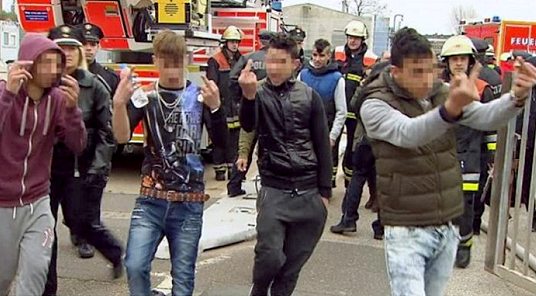 A group of four “youths” of various culture-enriching ethnicities went on a rampage for several hours last weekend in the Bavarian city of Amberg. In their boyish enthusiasm, the young miscreants indulged themselves by insulting, harassing, beating, and kicking passers-by in the public spaces of the city.

Below is an article about the incident from Bild, also translated by MissPiggy:

The four young men (17-19 years old, two Afghans, an Iranian, a Syrian) went on a rampage for several hours, and seemingly indiscriminately assaulted passers-by this past weekend. The investigating judge remanded the refugees in custody. They were taken to different prisons.

The mob even beat a girl.

At the station forecourt the next attack: One of the men is said to have insulted and harassed a girl (17) as a “hooker”. When the girl’s companions (both 17) intervened, they were injured by blows to the face.

In addition, according to eyewitnesses, the asylum seekers are said to have shoved a man down a flight of stairs at the train station.

Another victim (17) to Bild: “They cursed one of us as ‘nigger’, punching us immediately. We tried to run away, but they caught up to us at the traffic light. There were at least six of them. Three of my friends were punched, I was beaten down and kicked.” The vocational student was brought to the Mariahilf Hospital with bruises and concussion. A man who tried to help the victims was also beaten up.

Then the attackers fled. On Nabburger street they attacked two other passers-by, injuring them moderately. Immediately thereafter, three police officers captured the four men. One of them resisted, and insulting a female officer as a “c**t”.

Amberg Mayor Michael Cerny (CSU) wrote on Facebook: “The judiciary must respond with the appropriate severity, and subsequently the asylum authorities and youth welfare services. Of course, one should not generalize, but on the whole these idiots have done a disservice to peaceful and committed asylum seekers.”

34 thoughts on “Culture-Enrichers on the Rampage in Amberg”