The CDU (Christian Democrats) in Germany recently elected Annegret Kramp-Karrenbauer to succeed Angela Merkel as party leader. In the following report JLH draws together material from various German-language outlets to help non-German readers understand what the change in leadership portends. 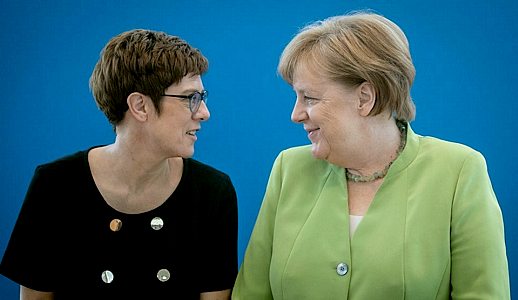 Who is AKK and Where is She Taking the CDU?

The new leader of the party and successor to Angela Merkel is not well-known outside (and to some extent inside) Germany. Here is some background from different (MSM) news sources.

While Die Welt speaks of the “cultural catastrophe” of Merz’s defeat, the article below clearly approves of “AKK.” The triumphant feminist satirization of the “old boy” network of the past certifies the (male) author’s sympathies. The theme seems to be that a major problem neutralized by Merkel’s rule was “toxic masculinity.”

Nightmare of all manly men — the election of Annegret Kramp-Karrenbauer brings the CDU irretrievably into the present; even though AKK is, if anything, more conservative than Friedrich Merz and Jens Spahn put together.

So, are you already a member of the CDU? No? Why not? Could it be you haven’t heard yet? It is now a democratic party! Not just true to the constitution (it always was) but — this is new — genuinely super-pluralistic, even internally. Anyone who followed the gripping electoral battle for the leadership, a competition of three extraordinarily able candidates, could see that. As every CDU functionary can attest without a further thought, they all deserved the position. It was great the way the battle was waged. Fully transparently. A real decision about direction.

That is what actually happened last Friday in Hamburg — a decision about direction. And it has been made, after a strenuous contest. With Annegret Kramp-Karrenbauer’s close victory, the CDU is irretrievably changed. Better said: with the non-election of Friedrich Merz. It has finally arrived in the present. There can be no going back.

The Hopes of the Lords and Masters

The return of Friedrich Merz was a seductive call from the past. It affected the movers and shakers, not just in the CDU, but all over the country, like a dose of Viagra. Traditional manly men are turned off by Angela Merkel, not just because of her refugee policy, but also because of her political style. They cannot stand her reserve, her refusal to provoke or be provoked. Their revenge was supposed to come on Friday.

For reactionary authoritarians, the social conditions before Merkel are an almost forgotten goal. When you could still pound the table. When a pact was a pact, sealed with beer and schnapps. When no one interrupted. When a decree instilled fear, not amusement.

Their great time had seemed to be behind them. Now, here was the chance to shape the future according to the rules of their glorious past. The perpetual shadow chancellor, Wolfgang Schäuble, was pulling the strings in the CDU. Only late in the game did he strike the supposedly decisive blow with the interview in Frankfurter Allgemeine Zeitung. Meanwhile, BILD was backing Merz with enthusiasm. The Handelsblatt saw the apocalypse of the CDU written on the wall, if he wasn’t elected: “Merz or Downfall.” Its former editor wrote by podcast and print as if he had been paid to do it: “Merz must become chancellor.” Roland Koch, long forgotten by the new generation, sent a breath of the Andean Pact[2] wafting through the SPIEGEL.

None of it helped. Nothing worked. After Annegret Kramp-Karrenbauer’s win, her rejoicing followers were flanked by the stony faces of Merz supporters. Finally, it was clear. Friedrich Merz composed himself quickly and showed himself to be a fair and worthy loser. Some others did not succeed in that.

A group friendly to AKK, so the story went, had set Merz’s microphone to low volume, so that his (actually astonishingly weak) speech was robbed of its power. Kramp-Karrenbauer herself had acquired monitored votes for the run-off election of Youth Union head, Paul Ziemiak, in discharge of a promise to make him general secretary.

Outside the convention hall, too, there was a hangover from the Merz intoxication. The tasteless pinnacle of this self-exposure was a tweet from Franz W. Rother, editor-in-chief of the commercial journal Edison. “Again, another old, white, ugly woman,” he tweeted at 4:24 A.M. of an early Saturday morning, and later completed the embarrassment following his gaffe with an apology: He had been joking, and he wished AKK “a good start.”

The End of the Illusion

The horrific episode is over. No worries. Even with another woman at its head, the CDU is still a conservative party. It was in past years. With her reserved coalition policy, her rational foreign policy actions and the short summer of her welcome for refugees, Angela Merkel only created the illusion of political progressiveness. Her followers will not likely try this risky tour de force.

Annegret Kramp-Karrenbauer grew up Catholic. She opposes repeal of (anti-abortion law) §219a. She considers marriage for everyone to be a gateway to demands for incestuous and polygamous marriage. And she will be harder to push out than Horst Seehofer was. AKK is possibly more conservative than Friedrich Merz and Jens Spahn together.

Maybe you should carefully consider joining the party.

The following article from Die Zeit is a bit more objective, but clearly sets off Kramp-Karrenbauer by comparing her favorably to representatives of those defeated at the convention and in the general election.

What We Know: AKK Intends to Lead

“CDU with a new [female] leader — is that enough for a new start?” That was Anne Will’s title for her program on Saturday, and it was the right question. No other one has been debated more hotly or controversially since the end of the CDU convention. Meanwhile, journalists and spin doctors, political movers and behind-the-scenes influencers have taken up the subject, evaluated the results and reduced the debate to two extreme positions.

EITHER the election of Annegret Kramp-Karrenbauer as party leader brings with it a moderating of course and confirmation of rationality, and AKK’s skill will be to allow the conservative and the economic-liberal wings appropriate influence, to prevent a splitting of the party…

OR Kramp-Karrenbauer’s narrow victory, seen in perspective, is a defeat, because supporters of Friedrich Merz and Jens Spahn will spare no effort to turn the course of the CDU to market-liberal and value-conservative and to so undermine the status of the chancellor — Angela Merkel — that she will step down sooner than she had wished, and leave the field clear — for whom?

Side-by-side with AKK, who had just announced she would stand for chancellor if that was in the party’s interest, Anne Will had Martin Schulz, failed candidate for chancellor, who had hoped to save himself by one last desperate act of fleeing into the office of minister of foreign affairs — which his party rightly denied him.

And then there was Wolfgang Kubicki, deputy chair of the FDR from Schleswig-Holstein where a Jamaica coalition[3] was functioning smoothly, in the absence any major actor. And two journalists: Christiane Hoffman of SPIEGEL — a sober realist — and Gabor Steingart, whose daily Morning Briefings made no secret of his passionate support for Friedrich Merz.

Now we know why AKK has the potential to be a leader of tomorrow and why Martin Schulz’s time is over. The deep resignation of his electoral defeat and everything that followed is visible even today in the one-time bearers of social democratic hopes. He and 100% of his party wish Kramp-Karrenbauer the loyalty of all those who did not vote for her. Even if all the Merz and Spahn supporters have their knives out for her, she cannot fall as far as the former standard bearer for the SPD in the general election. No party is more ruthless in its shredding of leadership potential than the SPD.

CDU leader means high expectations for Annegret Kramp-Karrenbauer. The CDU pins many hopes on its new party leader. In the future, Kramp-Karrenbauer is expected to provide for more trust in the populace and for a lively culture of debate.

On this evening, Wolfgang Kubicki played the part of the old lion who doesn’t know whether this is the right place to fight, or whether he should give in to his exhaustion. AKK, at any rate, was on the qui vive, as for instance, when she emphatically but clearly schooled Gabor Steingart — the declared Merz partisan — on what it means to lead a coal and steel area like the Saar out of a deep depression.

Also keen was SPIEGEL editor Christine Hoffman, who warned the new CDU leader to pay attention to those defeated at the convention, who were already constructing stab-in-the-back myths about how Merz failed because of a bad speech and AKK profited from a good one.

Where it could become critical for Annegret Kramp-Karrenbauer became clear in what at first seemed a marginal theme. That is how to deal with 219a in the criminal code, and the question of whether doctors are forbidden to state a preference for an abortion. AKK’s identifiable formulation could be interpreted to mean that she is aware of the relevance of the disagreement. She will have to understand that this could become a breaking point for the coalition.

All in all, AKK must control her didacticism and consider where she actually wants to lead the Union. That was not made clear on Sunday evening. It was clear, however, that she intends to lead. Whether she can has yet to be seen.

Filling in some gaps, an article in merkur.de offers details:

And the Berlin Morning Post reveals that the CDU leadership in Berlin is demanding an early replacement of Merkel by Kramp-Karrenbauer as chancellor, rather than waiting through the indicated time until 2020. “Otherwise, the new party leader is a toothless tiger.”

While the world, and the CDU, await further developments in this drama, an article in Stern has some fun with how the very German surname of AKK is handled around the world:

While German journalists wrestle with how to fit all eight syllables into a punchy headline, reporters and others in foreign lands have considerable trouble in just being able to pronounce it:

The French struggled to produce “Anngret Kromp-Karrenboer” with, of course, accent on the last syllable.

Thai has a little trouble with the letter r: “Aaa-ne-keet Kaamp-Kaa-een-bau-aa”.

The Spanish, who have no trouble with r, recall the much more challenging name of a liberal minister named Sabine Leutheusser-Schnarrenberger.

The world should be relieved at how easy it is to say “Trump,” right?

3 thoughts on “Who is AKK and Where is She Taking the CDU?”