JLH has trawled the German-language news and compiled this report on the latest difficulties besetting the AfD. 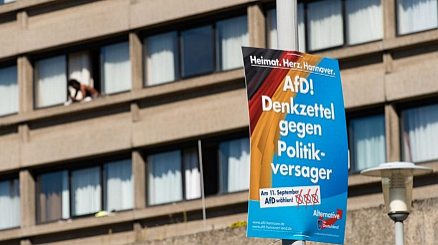 Big Trouble for the AfD

Putting together a few different news stories delineates the development of a campaign by the opponents of the AfD (Alternative für Deutschland, Alternative for Germany). For a while there was an inclination to treat the new member of the Bundestag and the EU Parliament like an unsightly blemish that has suddenly appeared on the body politic. Disapproval radiated from all points of the spectrum. There was an effort to look away from this unsightly growth and pretend it wasn’t there. Unlike their American establishment cousins, the Germans did not immediately froth at the mouth and insist that this was all some ghastly cosmic error that must be expunged by any means, fair or foul.

As referenced in an earlier article on the difficulty the established parties were having dealing with the AfD,[1] the Süddeutsche Zeitung noted:

The other parties must find a clear and sensible answer to such provocations. Thus far, their dealings with the AfD have been by simple reflex and even against the rules that mark the spirit of an exemplary parliament. That just plays into the hands of the AfD. It is time to take a course that is defined by aplomb, composure and a clear approach, instead of agitation and defensiveness. The general tendency to condemn every one of the 92 representatives of the AfD as racist or other extremist, because he belongs to this distasteful party, and should be replaced. General uproar leads nowhere, no matter how repulsive the AfD’s ideas may be. It has seldom harmed the AfD in its five years of existence and helped it greatly. A rejection must be specifically based.

As will become clear, the German establishment — apparently uninterested in this solution — has found a much more “Democratic” approach. First, there are the demonstrations in Chemnitz, precipitated by an immigrant’s stabbing a 35-year-old resident. As a friend of mine with some knowledge of the city remarked to me: “I think the government picked the wrong place to experiment.” The news media reported that Chemnitz has a certain “neo-Nazi” history, but there was no equal emphasis on the likely influence of living for decades under authoritarian decision-making in the German Democratic Republic. Those who fear the resurgence of Nazism — along with the many more who fear the emergence of the survivalist East German psyche — have the satisfaction of knowing that the “Constitutional defense” forces, a.k.a. National Security, have now decided to officially “monitor” the goings-on in Chemnitz and, consequently, the AfD. Thus supporting the voices that tie the AfD to Nazism. An article by Hans Heckel titled “AfD in a Grotesque Situation” reveals the claim that “elements of the AfD have an ‘undefined relationship’ with anti-constitutional persons or groups, or express themselves in a way that suggests such.”[2]

The second barrel of the establishment shotgun was made in Switzerland, and it is aimed directly at the party leader whose mere presence in the party is a repudiation of so many claims of misogyny, bigotry and other sins automatically laid at the feet of the AfD. Alice Weidel — Alexander Gauland’s running mate — is in a single-sex relationship. The couple has one adopted child. This paragon of progressive values is also a reliable, articulate conservative who was even willing to campaign in Thuringia with the “notorious” Björn Höcke. There could hardly be greater damage to the party than the loss of this member.

An article in stern.de entitled “The AfD and Good, Old Money — Alice Weidel Under Pressure” sarcastically lays out the situation:

The AfD has many donors and supporters. Some of them prefer to remain unknown. An especially generous donor could be about to become a problem for AfD parliamentary leader Weidel.

A donor from Switzerland is sending Alice several thousand Swiss francs a week. ‘So what?’ asks the treasurer of the local AfD chapter for Bodensee (Lake Constance) in August of 2017 in an e-mail to the state treasurer.

The answer she receives does not at first cause Weidel’s local chapter to reject the donations. In a few weeks, ca. €130,000 has accumulated. Money useful to Weidel in the election campaign.

Eight months later, the AfD has entered the Bundestag with 12½% and Weidel is a parliamentary leader. And the AfD members get cold feet. Donations from outside of Germany are allowed only if the money comes from the wealth of a citizen of Germany or the EU. Anything else would be illegal, since foreign individuals or nations cannot be allowed to influence German politics.

So the treasurer is to send the money back. But that is not so simple. Weidel, whose family also has a residence in Switzerland, says she does not know the donor.

The situation becomes more complicated, because the donation as been forwarded by the head of a Swiss pharmacy, who says he was just doing a favor for a business acquaintance. While some party members are nervous, Gauland says that if he stands for election again, it will only be with Weidel as partner. And rumors about the facilitating pharmacist are not complimentary.

It’s not exactly suspected collusion with the Russians or suggestions of racism and misogyny, but the principle is the same. Stay tuned.

One thought on “Big Trouble for the AfD”