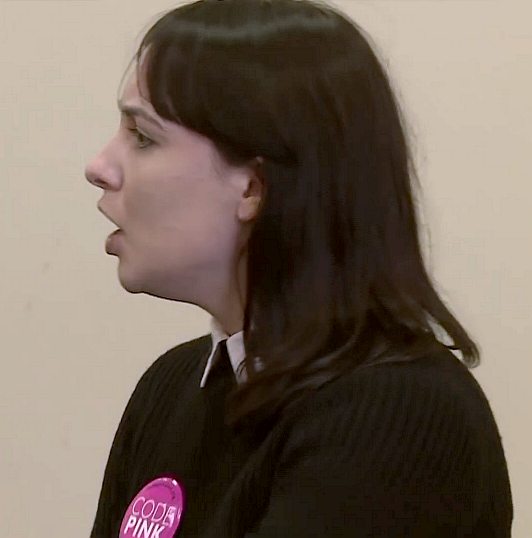 I mentioned the other night that earlier in the day I had attended a panel discussion sponsored by the Middle East Forum entitled “De-Platforming, A New Problem”, hosted by Rep. Paul Gosar (R-AZ) in the Rayburn House Office Building in Washington DC. Daniel Pipes moderated it, and in addition to Rep. Gosar, the panelists were Tommy Robinson (by video link), Anne Marie Waters, Raheem Kassam, and Ezra Levant.

The beginning of the event was interrupted for an extended period (it felt like half an hour, but was probably more like ten minutes or so) by three lefty protesters. As you can see from the screen cap above, one of them represented Code Pink, a far left peace-’n’-justice advocacy group that was co-founded and made notorious by Medea Benjamin.

I intended (and still intend) to provide an extensive write-up of the event. I was waiting for a full video of the proceedings to be released, but unfortunately there has been a glitch: the MEF is having technical problems with the video file, so the public release of footage of the panelists has been delayed.

As a result, the sole video record of the event is the one provided by RT. For reasons best known to themselves, the Russian team chose to focus mostly on the disruption of the proceedings, and omit the substantive remarks by the panelists. The clip I posted earlier has been taken down by Ruptly and replaced with this slightly longer version, which contains a little bit more of what Tommy said along with a few other odds and ends:

For those who are interested, the original two-minute Ruptly video has been mirrored here.

The bearded shouter with the kippa is named Mikey Franklin, who bills himself as a “professional troublemaker”. At one point he had a Facebook page, but sometime within the last 48 hours it has been taken down. However, as of this afternoon he still has active accounts at Twitter, LinkedIn, and Instagram. He also has IMDb cast listings for two productions, and is listed at Netroots Nation.

Except for Facebook, all of the above links were active this afternoon (November 16). For all I know, they may disappear soon, too.

A woman named Caroline Debnam says she was one of two young female protestors at the back of the room. It’s hard to tell from her Twitter postings, but I think she’s the one wearing the Code Pink button in the screen cap at the top of this post.

I also have my suspicions about the man with the grizzled hair and beard who sneered at the Code Pink girl and called her a “snotty little brat”. His behavior was not helpful to our side, but rather served the interests of our enemies. However, if what he did was entirely of his own volition, I apologize to him in advance.

I can’t help but wonder who footed the bill for this operation. And I’m suspicious of the fact that Ruptly had multiple stringers on site, and was able to post an edited video of the disruption very quickly, before I even returned home from the Wretched Hive of Scum and Villainy.

I tend to paranoia, but I will refrain from airing all my speculations here, not only because they are just that — speculations — but also because I don’t want to post anything that might end up being actionable in the event that one or more of the speculatees were to take exception to what I say.

The fact that there is no video of the what happened except for the unsatisfactory Ruptly footage makes it imperative that private cell phone recordings of all or part of the event be uploaded to YouTube as soon as possible. If you were taking footage at the MEF gig, please get in touch with me (gatesofvienna [at] chromatism [dot] net), and I’ll help you get the footage to Vlad Tepes. Or, if you have uploaded your footage, please send a link. I haven’t been able to find anything except the Ruptly clips.

One last note: According to his social media accounts, Mikey Franklin is indeed Jewish. However, if you look through his Instagram snaps, you’ll see that neither he nor anyone among his family and friends wears a kippa, or shows any other sign of being Orthodox.

It’s plain that Mr. Franklin reserves the wearing of the kippa for those occasions when he is being a “troublemaker”. The practice would seem to serve two simultaneous purposes:

I’m not saying that purpose #2 is deliberate on his part. But it may sometimes serve the interests of those who would contract with him for his troublemaking services (if such a transaction has ever in fact occurred).

Once again, the above is pure speculation. But all of the information that was at the listed links as of 2:45pm EST is factual.

Readers are free to draw any additional conclusions they like. However, I may not approve them in the comments if I deem them potentially actionable. Circumspection is recommended.

The MEF issued this press release about what happened on Wednesday:

PHILADELPHIA — Nov. 15, 2018 — Three hooligans disrupted a Middle East Forum event in the Rayburn House Office Building in Washington, D.C. yesterday, hurling expletives and insults. The louts continued to scream for some ten minutes, preventing the event from resuming until the Capitol Police arrived and expelled them.

The event, sponsored by Congressman Paul Gosar (Republican of Arizona) in cooperation with MEF, a Philadelphia-based think tank, focused on censorship and “de-platforming.” This is the new trend of ostensibly non-political institutions — social media, Amazon, PayPal, O2, Hyatt Hotels, Norwegian Cruise Lines, Mastercard, among others — to deny service to conservatives or those who publicly discuss Islamism and related topics.

As one participant in the event, UK activist Tommy Robinson, put it, “They are trying to de-platform an event on de-platforming.” Robinson discussed PayPal having closed his account and the major impact this has had on the ability to convey his message.

Rep. Paul Gosar opened the event with a warning that, “If you are not able to express your ideas on the common platforms, then you do not have free speech. If you are denied the ability to trade in the common marketplace, then you are not economically free — which is a prerequisite to political freedom.”

Raheem Kassam, a UK citizen of Pakistani Muslim ethnic background, told about his being demonetized by YouTube, and the impact this had on his ability to do his work.

Ezra Levant of Canada’s Rebel Media explained how the forces of intolerance have bullied him in courtrooms and, most recently, with canceling two cruises he had planned for Rebel.

Anne Marie Waters of the For Britain Party, told about her extensive difficulties in setting up a new party — simply opening a bank account or renting offices.

“Under the pretense of standing up to ‘Nazis’ and ‘Islamophobes,’ the hoodlums tried to silence people from, among others, Jewish and Muslim backgrounds,” said Daniel Pipes, MEF president and moderator of the event. “We waited out the disruption and resumed a successful discussion of an increasingly urgent issue. Suffice to say, the Forum will not be intimidated by thugs. But, sadly, we will make sure to have security close at hand at future public events.”

23 thoughts on “Something Wicked This Way Comes”