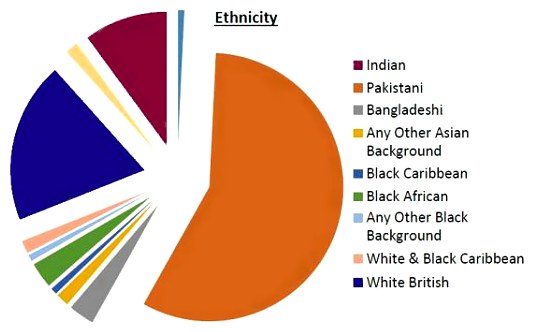 No, he hasn’t won his court case — that won’t come up again for weeks, or maybe months; they’ll drag it out for as long as they can.

But Tommy has won. This is not a little victory, but a major one: his actions have forced the local authorities in Bradford to explicitly and publicly acknowledge that Pakistanis make up a massively disproportionate share of the suspects in “grooming” cases — that is, the organized sexual enslavement of underage white girls by non-white Muslim gangs.

And those same authorities acknowledge Tommy’s role in what they are discussing: “If we don’t ask these questions, Tommy Robinson will.”

In the pie graph above you can see the Pakistani share of the cases, which looks like a Pac-Man icon with its mouth open wide. Can you imagine what it would look like if the figures had been normed to reflect the size of each group as a percentage of the population? The big mouth would snap shut on the little sliver of the “White British” share.

Yes, Tommy Robinson has won: The Powers That Be in Britain have been compelled to admit that what he has been vilified for saying for the last nine years is in fact TRUE.

Here’s the article from The Bradford Telegraph and Argus:

“If we don’t ask these questions, Tommy Robinson will”

Ethnic Breakdown of Grooming Suspects ‘Should be Addressed’

A COUNCILLOR has asked what is being done to address the fact that a “shocking” amount of suspects in grooming cases in Bradford were of Pakistani origin.

Councillor David Ward (Lib Dem/Independent, Bolton and Undercliffe) was referring to recently released figures that show that around 63 per cent of child sexual exploitation suspects identified in the past year were classed as Asian/Pakistani.

He was told that the high proportion was due to a specific ongoing police investigation into historic grooming offences in the district, which had identified a large number of Asian suspects.

The question was asked during a meeting of Bradford Council’s Children’s Services Scrutiny Committee last night, when members were discussing an annual report into CSE in the district.

The report reveals that from April 2017 to the end of March this year, there have been 317 CSE flagged offences recorded on Police systems.

People of Pakistani descent made up around 63 per cent of the suspects identified in that period, with white British suspects making up around 20 per cent.

During the meeting, which was attended by members of the police, Bradford Council officers and children’s charity Barnardos, Cllr Ward said: “These charts show a disproportionate number of perpetrators that are Asian, and it is something we need to address.

“If we don’t ask these questions, Tommy Robinson will next time he is down in Bradford.

“There is nothing in this report that really refers to this statistic. It is a shocking statistic — 63 per cent of perpetrators. This has an enormous impact on community cohesion, but we have to ask these questions, if we don’t others will.”

Tommy Robinson, whose real name is Stephen Christopher Yaxley-Lennon, is a far-right activist and former leader of the English Defence League.

Police responded to Cllr Ward by referring to Operation Dalesway, an ongoing operation to tackle historic grooming offences. The report says the operation has led to the arrest of 109 suspected perpetrators since 2014, with dozens more arrests expected in the coming months.

Detective Inspector Steve Greenbank from West Yorkshire Police said: “When you look at that chart it includes people identified by Operation Dalesway. There is a large amount of Asian suspects in relation to these historic incidents.

“If you look at figures from more recent offending, it is a bit more evenly spread, around 50 per cent white British and 50 per cent Asian/Pakistani.”

The committee heard that the number of people referred to the district’s Safeguarding hub had gone up by 14.5 per cent in the past few months.

Michael Jameson, head of Children’s Services on Bradford Council, said the rise was due to increasing awareness of child safeguarding issues, and the warning signs of grooming.

A safeguarding hub meets daily to discuss children at risk, and it is made up of the police, Council staff and charity groups.

DI Greenbank said: “Sometimes we get disclosures from victims who have now become adults, and realise what happened to them when they were younger wasn’t right.”

The meeting was attended by Angela Sinfield, a Keighley mother who has been campaigning against grooming for years.

She told members: “I know there is fantastic work being done, but what I think is needed alongside this work is to go in to schools and to talk to young people about criminal gangs and how to avoid them. A lot of these gangs are involved in grooming, and they put such fear in their communities a lot of people are afraid to come forward.”

Police also said work was being done to raise awareness of grooming in “emerging” communities, such as the Roma community. In August alone 10 Roma children in Bradford were classed as being “high risk” of grooming.

42 thoughts on “Tommy Robinson Has Won”