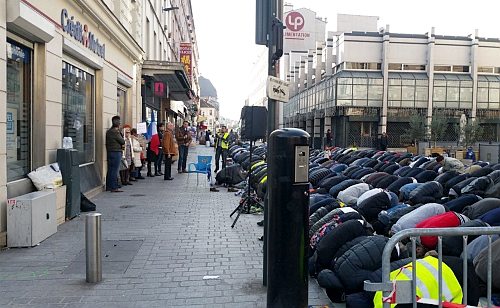 The municipality of Clichy-la-Garenne has finally cracked down on those notorious Islamic street prayers, which have given the northwestern suburb of Paris a bad name both at home and abroad.

The Union of Muslim Associations and its president have been sentenced to pay a total fine of €27,000 for unauthorized rallies, after thirty-four street prayers.

€500 for every illegal street prayer, the Union of Muslim Associations of Clichy (UAMC) and its president, Mohand Kazed, have been sentenced to a fine of €5000 each, and, together, to €17000 in expected damages to be paid to the city of Clichy. After complex legal procedures, the Nanterre Criminal Court handed down this decision on Tuesday. Thus, the judges have decided: that the thirty-four street prayers which were organized every Friday between March 24 and November 10 of 2017, without any declaration to the prefecture, are not in accordance with the law.

By bringing the faithful to the front of the Town Hall to pray, partially on the Boulevard Jean-Jaurès, the UAMC and its president wanted to protest against their expulsion from the premises of the rue d’Estienne d’Orves, offered by the former mayor of the town, Gilles Catoire (Socialist Party), under the precarious lease terms. When the latter expired, after the election of the new mayor Rémi Muzeau, the association refused to leave the premises, while a new place of worship was to open on Rue Trois-Pavillion.

The conflict worsened until their expulsion by the police, and then the rallies disrupted local life for ten months. “The mayor was strongly criticized for his chaotic town,” argued Rémi-Pierre Drai, esq., for the city council, and Rémi Muzeau was “extremely satisfied” by the court’s decision. The mayor is of course very happy about it, and is already promising to spend the expected damages for cultural actions on Rue des Trois-Pavillons.

The president of the Union of the Muslim Associations of Clichy was not present.

The reaction by Mohand Kazed, was, on the other hand, quite the opposite of course. Even if he made no direct comments, since he did not appeared before the judge, his attorney, Arie Alimi, esq., has already announced the filing of an appeal. According to the attorney, the declaration to the prefecture was made, “but not at the right time”. He argued additionally that while prosecuting his clients for organization of those undeclared rallies, the town is not adducing indisputable proof concerning the dates. No photos, no witnesses… however, numerous articles written on this subject in his opinion are not “indisputable proof”.

Even before the court could look into the case, Arie Alimi, esq., fought on a different field, arguing the incompetence of the court. According to the attorney, religions having been “regulated by the law of 1905 on the separation of the State and the Church”, a street prayer cannot be compared with a rally. Therefore, according to him, the criminal court should not be adjudicating the case, but the police court.

Additionally Rémi Muzeau has been sued by Mohand Kazed for “incitement to hatred”. In November 2017, live on LCI [TV], the city counselor incidentally brought up “sermons inciting murder”. But the UAMC president abandoned the procedure on Friday night. His attorney, however, admitted that he was in the process of preparing another “more precise one”, since justice has not been served yet with this case.