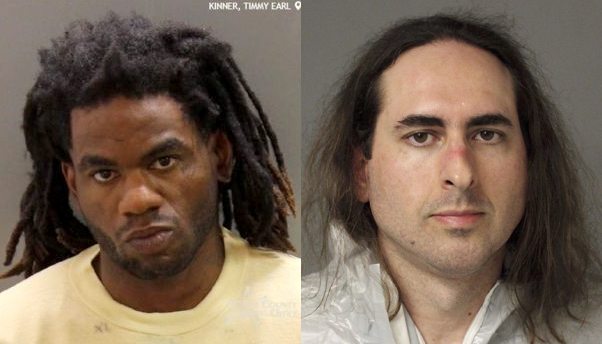 Have you heard of an accused killer named Timothy Kinner?

Well, it’s not really surprising if you haven’t. Unless you were paying very close attention to the news on July 1, you wouldn’t have noticed the story.

On the evening of June 30 a Mr. Kinner, a resident of Los Angeles, allegedly entered an apartment in a refugee-resettlement complex in Boise, Idaho. He was carrying a knife, and started stabbing people at the party, most of them immigrant children. The nine victims were from Syria, Ethiopia and Iraq. One of them — the 3-year-old birthday girl — later died in the hospital.

But it didn’t happen. The story quickly disappeared. If you’re wondering why, take a look at the photos at the top of this post: Timothy Kinner is the man on the left.

On the other hand, you’re probably aware of a man named Jarrod Warren Ramos, the accused killer of five people at the offices of the Capital Gazette in Annapolis, Maryland. Mr. Ramos committed his alleged atrocity just two days before Mr. Kinner’s. The story hit the news big time, and stayed there. It was prominent enough to merit its own Wikipedia page.

Jarrod Ramos is the man on the right in the photo at the top of this post. He and Timothy Kinner share certain characteristics: each has long hair and an apparent sullen attitude. But there are certain significant differences, as you can see.

If Mr. Ramos — or any other white man — had attacked the “refugees” at that birthday party in Boise, the story would still be making above-the-fold headlines every day. Talking heads on all the major media channels would still be discussing it every evening. There would be massive anti-racism protests on the Mall in Washington DC. The photo of the appealing wee bairn would be on everyone’s TV screen all the time. It would be Trayvon Martin on steroids.

But it didn’t happen that way. Once the photo of the sullen man with the dreadlocks appeared, the story disappeared from the national news. I looked for it two weeks later, and it was gone.

Black people kill black people nearly every day in Chicago — on some weekends there are six or eight shooting fatalities in the city — and not infrequently little children are victims of stray bullets. But without a white man as perpetrator, there’s zero interest in the story. It merits a couple of lines in the local news, maybe. Ho hum, another shooting in the city. And now for the weather…

And there’s another reason why the Boise story faded away: it can’t be a “hate crime” when a black man kills black people. That’s what the Boise police chief said about Timothy Kinner — no evidence of a hate crime. And without a white man committing a hate crime, it’s not a very interesting story.

But back to Jarrod Ramos. After the massacre in Annapolis, the media were slavering for a Trump supporter as the perp. They knew the shooter was white, so that was a head start. A man named Conor Berry, a reporter for the Republican in Springfield, Massachusetts, tweeted that the killer had dropped a MAGA hat in the offices of the Capital Gazette during his shooting spree. It wasn’t true, of course. And it hadn’t even been a rumor — the reporter just made it up out of whole cloth. But if you hang out in progressive circles, it makes sense: the murderer was white, carried a “long gun”, and shot a bunch of people. How could he not be a Trump supporter?

Poor Mr. Berry was forced to resign his position a few days later.

It’s been a pattern in mainstream media ever since Trump won the Republican nomination two years ago: whenever some white guy shoots people, the media snoids immediately speculate that he’s Trump supporter. So far they’ve always been disappointed. Oh, I’m sure an occasional Trump supporter runs a red light or gets drunk and punches somebody. But I’ve haven’t heard about avowed Trump supporters killing people. And if there were any such, you can be sure the media would be shrieking about them.

Funnily enough, there have been several mass killers who were progressives and Obama supporters. For example, the late James Hodgkinson, who shot up the congressional baseball practice session last year. Even Wikipedia acknowledges that he was a “left-wing activist”.

Another one may have been the late Stephen Paddock, the man who massacred 58 people in Las Vegas last fall. Although his ideological leanings are not entirely clear, he was definitely not a Trump supporter.

The left-wingers in the media — which means almost everyone in the media — haven’t given up hope. They’re expecting a Trump supporter to step up any day with an uncontrolled gun and shoot a lot of brown people out of “hate”. They know that a MAGA hat will appear at the crime scene eventually — it’s just a matter of time.

13 thoughts on “The MAGA Hat That Wasn’t There”