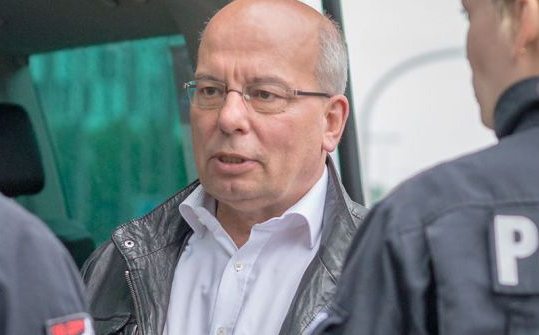 Long-time readers will remember Rainer Wendt, the head of the Police Union in Germany. He was featured here in a number of videos back in early 2016, making outspoken remarks on TV talk shows about the Raping ’n’ Groping festival on the previous New Year’s Eve in Cologne and other culturally enriched cities.

Now Mr. Wendt has spoken up about the recent rape and murder of 14-year-old Susanna Feldman by a pair of Muslim culture-enrichers. As usually, the head of the Police Union doesn’t mince any words.

Many thanks to Nash Montana for translating this article from JournalistenWatch:

Rainer Wendt: “I allow myself to react so emotionally — even without the permission of the speech police of the Landtag [state legislature]”

Rainer Wendt, the chairman of the German Police Union (DpoIG) has reacted very emotional in response to the murder of the 14 year old Susanna Feldman by the rejected asylum seeker Ali B. and his deportation back to Germany. He wants to see the murderer not in front of a jury, but rather to “burn in hell”. Outrage immediately rang out from the corners of those who should be held responsible politically for this murder.

Wendt posted on June 7th on his Facebook page: “And my thoughts are with the offenders. Should they really stand in front of one of our courts? With a mocking grin for the victim and contempt in their faces for our country? Do I really want to experience how expert witnesses and lawyers relativize, downplay and belittle and try to explain that which cannot be explained? They should burn in hell. That’s what I want.” (Entire post at the end of this article)

Wendt still stands by his commentary even as a horde of PC guardians commenced to try to shoot down the Union man with partly dubious arguments. Wendt’s show of stamina as he addresses the one or the other of the mentally absent comments can be described as nothing short of amazing.

It’s no less than stunning to see some of the people who are attacking the police union man, from the rows of those who through their devoted political actions have cemented the quasi-status quo. For instance Daniel Sieveke (CDU), the chairman of the Landtag home affairs select committee, is “shocked” and he speaks out against his party colleague: “In my eyes Wendt has entirely disqualified himself as an honorable police retiree in his populism-tainted demand for vigilante justice.”

Christian Dahm, the deputy chairman of the SPD Landtag fraction, shakes his cardinal socialist head in complete bewilderment over Wendt’s remarks: “He must have forgotten that he has sworn an oath on our Constitution.” He adds, “Minister of the Interior Herbert Reul and the NRW-CDU would be well advised to distance themselves from their party friend.”

From the left mainstream corner the TAZ agitates that Wendt supposedly wants to take an axe to the Rule of Law and that he is wishing for a police state.

In an interview with the NOZ [Neue Osnabrücker Zeitung], Wendt confirmed that the commentary that he wrote on his personal Facebook page was very emotional. He had received a lot of positive reactions for this. And he notes that he has nothing to apologize for. “I allow myself to react so emotionally, even without the permission of the speech police of the Landtag,” Wendt says.

Of course he would welcome it if the offender gets his day in court and receives a well-deserved punishment. Only he personally would prefer to not see the murderer in court; he does not want to be part of it.

“Just as a reminder” Wendt posted, for all those who are not familiar with Article 5 of the GG [common basic law, a.k.a. constitution]:

Here is the exact wording of what Rainer Wendt posted on his private Facebook account on June 7th, 2018:

Susanna is dead. And what remains is not only grief and disbelief. There also is deep anger and indignation. And at the same time, helplessness. One is paralyzed with horror.

Yes, I know one should not instrumentalize such deeds for some political demand or statement. And sometimes it is better to pause and be silent out of respect for the victim and immediate family.

And yet, still it is breathtaking if one thinks for just one second of the indescribable torture that the young Susanna, standing at the beginning of her life, had to go through.

As a father and a grandfather it feels like a huge black wall of fear towering in front of us when I think of how many more such beasts are on our streets, ready at any time to kill, to torture and to indulge in their misanthropic brutality.

And there is anger too that builds up when one thinks of the long criminal rap sheet for one who supposedly sought protection here, and who was so easily able to just get into an airplane like a tourist and leave the country.

What will become of our country when we tolerate the entry of people who engage in massive amounts of unlawful behavior, even commit terrible criminal acts, and yet are left to walk around freely, apparently ready at any moment to strike again?

What will become of our law-based state when it can no longer protect its people, when it seems that all that are left are disdainful juristic/legal implementations on paper, bureaucratic procedures and the silent acceptance of blatant injustices and life-threatening danger?

What will become of our democracy when those that are elected tenaciously ignore the will of those who have transferred power to them?

And now, again the well-known rituals, the return of the usual empty phrases and platitudes, the used-up words? And then back to business as usual? How many more times? How much longer? What is becoming of our country?

Susanna is dead. And my thoughts are with her family, her friends, and the people by whom she will be forever missed.

And my thoughts are with the murderers as well. Do I really want to see them in front of a court? With a mocking grin for the victim and contempt on their faces for our country? Do I really want to experience how expert witnesses and lawyers will relativize, downplay and belittle and to try to explain that which cannot be explained?

They should burn in hell. That’s what I want.

11 thoughts on “Rainer Wendt: The Murderers of Susanna “Should Burn in Hell””