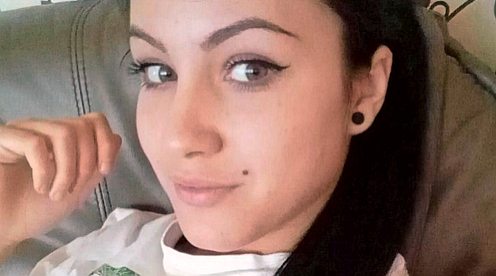 Iuliana R., called Julia by her friends, only lived to be 15 years old. Photo source: Facebook

“I am dying, I am dying” — Another girl stabbed to death in Germany

An original translation from Bild:

(This is a breaking story; the following translation is of the most updated article. To read the previous version, please scroll down. — translator)

Viersen (NRW) — The young girl is smiling into the camera in a friendly way. Dark hair, brown eyes. She is Iuliana Elena R. (15), nicknamed Julia. Her life ended brutally on Monday. On this sunny spring day, the girl was stabbed to death in the park called “Casinogarten” in Viersen.

Shortly afterwards, between shrubs and flowers, there are investigators in forensics overalls, investigating the crime scene. The homicide commission’s investigators are trying to reconstruct what happened on the lawn.

Gravely injured, the victim staggered towards two homeless people, said: “I am dying, I am dying”. Then, she collapsed.

As the girl did not have any papers with her, her identity was initially unclear. In the evening, it turned out: it is Iulia R. (15).

The girl is from Bucharest (Romania), and living with her parents in a suburb of Viersen in a three-storey building. She had a boyfriend and went to school in Viersen. Police officers escorted her parents from the precinct to the crime scene, where bloodstains were still to be seen in the evening.

The mother kept crying “Iuliana” and collapsed crying at the crime scene. When they came home, the parents were still crying. They allowed Bild to show a photo of their murdered daughter.

“Casinogarten” in downtown Viersen (North Rhine Westphalia) is a meeting point for drinkers. The homeless Ilja Hansen (47) and his girlfriend come here often, yesterday, too. Ilja Hansen tells Bild: “We were sitting in the park, having a beer. Then we heard loud screams.”

Moments later, the victim approached them. Hansen: “My girlfriend and me ran to her. She fell on her knees, into our arms. She was covered in blood and covered in slash wounds. We immediately called police and fire department.”

The emergency call was received at 12:22. The emergency doctor and paramedics took the injured girl to hospital, but she succumbed to her grave injuries shortly thereafter.

The homicide commission was searching for a perpetrator, who, according to police, was of “northern African appearance” and had “black, oily hair”. A helicopter and a large police force were deployed, searching for the perpetrator. Specialized “mantracker” dogs were to pick up his trace.

When the officers wanted to check a suspicious Turk (25), he fled. Later, the man, who has a previous police record, turned himself in at a precinct. A police spokesman: “His possible involvement in the deed is currently being investigated.”

A mother who was visiting the park with her child and allegedly witnessed the deed might be able to identify the perpetrator.

The background of the deed is still completely unclear.

Woman stabbed to death in park in North Rhine Westphalia

Bloody deed in Viersen (NRW): According to Bild’s information, a young woman was stabbed to death on Monday in Casinogarten!

Police are hunting for the perpetrator on the run!

According to police, the man is wearing dark clothes and is of “northern African appearance, has got black, greasy hair”.

According to investigators, the victim is around 20 years old. Her nationality is uncertain, but she allegedly said in German “I am dying, I am dying”, when she approached homeless persons in the park, gravely wounded. Then she collapsed unconscious.

One of the homeless people made an emergency phone call at 12:22; the woman was taken to hospital immediately, where she then died.

Ilja Hansen (47) is the homeless man into whose arms the woman fell. He tells Bild: “We were sitting in the park, having a beer. Then we heard loud screams.”

Moments later, the victim approached them. Hansen: “My girlfriend and me ran to her. She already fell on her knees, into our arms. She was drenched in blood and covered in slash wounds. We immediately called police and fire department.”

A helicopter and a large police deployment of officers and cars is searching for the suspect. Specialized “mantracker” dogs will pick up the perpetrator’s trace. Police began an murder investigation, led by the experienced investigator Ingo Thiel.

“Casinogarten” is a posh park. It contains statues by the Beuys-scholar “Anatol”. In its centre is a modern, popular playground. A mother wrote in a Facebook group in the afternoon that she and her little son witnessed the deed, and described the perpetrator to the police.

The crime scene is alleged to be a meeting place of drinkers and homeless people. According to eyewitnesses, however, the young woman was well-kempt. She had a bicycle with her. It remains unclear whether she belonged with the homeless people and drinkers.

As the witness did not have a passport on her, identifying her was difficult, according to Bild’s information.

Herbert Reul (CDU), interior minister of North Rhine Westphalia, comments on the crime: “The deed that happened this noon in Viersen is shocking. It saddens me that a young woman was lethally wounded in a public park. NRW police are investigating with consequence, and searching for the alleged perpetrator with great force. The ministry is kept constantly informed about the current state of investigations.”