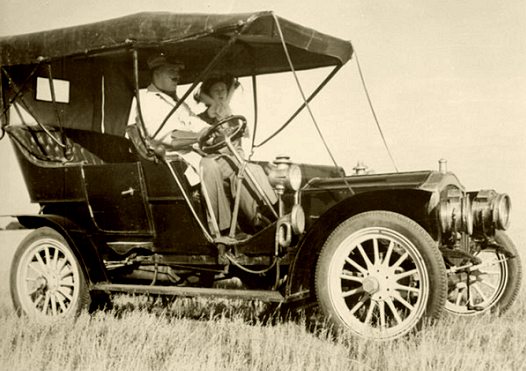 I arrived home late last night after attending a family event, a relaxed but very hot outdoor gathering in a Deep Southern state. I was able to talk to some relatives I haven’t seen in many years — which was nice, but also disconcerting. For instance, a young lady I last saw when she was about fourteen is now forty, married with a couple of half-grown kids. How strange!

The trip down there and the return trip home were both long and unpleasant. I noticed that Dymphna mentioned in the comments my predilection for “shun-piking”, but that’s only practicable for journeys of 250 miles or less. This trip was much too long for that. I hate interstate driving, but the interstate was unavoidable for last weekend’s journey. Theoretically, it should have taken seven to eight hours each way using a combination of major highways and interstates, but it took much longer than that, both coming and going.

Going down there I hit major construction during rush hour, and did one of those horrible bumper-to-bumper creeps for about thirty miles — the kind of thing that makes travel on the interstate so much fun. It added about an hour and a half to the trip.

So I decided to take an alternate route home, through the mountains. Yes, it’s longer, but it surely can’t take any more time than the other route, can it?

The home stretch of the return trip was up Interstate 81, crossing into Virginia at Bristol. After I passed Marion, signs started flashing that said both lanes were closed due to an accident at mile marker 93. So I started watching the mile markers, and at about MM89 traffic slowed down and then stopped. As it happened, my car became motionless right next to an exit ramp, so I peeled off there and turned right at the stop sign, intending to go east and then north and eventually make my way past the blockage and get back on I81.

Even though I was still a long way from home, I was in an area of Virginia that I know pretty well, so I didn’t have to worry about getting lost. However, I didn’t reckon on the weather. I had watched the storm ahead of us get closer as I came up 81, but I didn’t know the accident that closed the road had had something to do with the weather.

A few minutes into the back country the nature of the storm suddenly became clear. With almost no warning — just a few splats of big drops beforehand — a torrential downpour began. It was like driving under a waterfall. And immediately the hail hit with equal ferocity. I didn’t stop, so I couldn’t really assess the size of the hailstones, but when they broke up on the windshield they looked like they must have been about the size of ice cubes. The sound of them was like gravel being poured out of a dump truck onto the roof of the car.

I was on a winding mountain road with no visible shoulder to stop on, so I kept creeping along, slowing down to 15mph in the worst of it, with visibility of maybe fifty feet or so. The people behind me did the same, except for one impatient fool who passed us doing about forty. I hope he got home OK.

The hail quit after about ten minutes, but the waterfall continued for a while afterwards, so it was slow going. When I came to a main road, I turned left, and not long after that the rain let up. I eventually arrived back at the interstate at Christiansburg. By then the sun had come out. I noticed the flashing signs at the southbound ramp said both lanes were closed at MM93. So for all I know, despite my massive detour through the deluge, I may have still been in front of those poor folks who had been stuck in the backup ahead of me when I left at that exit ramp.

For anyone who’s interested, there are brief articles about what closed I81 here and here. Apparently a tractor trailer jackknifed, and I’ll bet anything it was during the same horrific hailstorm that I was driving through just a little later.

So that’s why I was a couple of hours late getting home last night, and also why I didn’t try to throw together a news feed post before I went to bed.

P.S. The car doesn’t really have any dents from hailstones; the title is mere literary license on my part. This wasn’t real hail like they have out in the Midwest or the Rockies. It was wussy stuff in comparison. But it’s still the worst hailstorm I’ve ever personally experienced.

10 thoughts on “A Safe Return, Hail-Dented But Intact”