The following essay by Nick McAvelly was published earlier at the Frozen North. 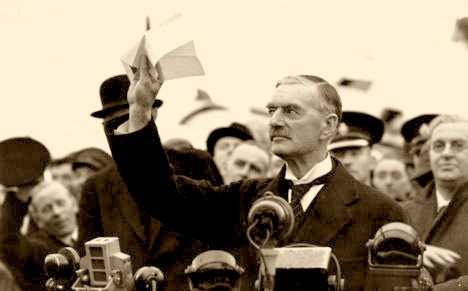 On the front page of Thursday’s newspapers, under the headline “May’s Great Gamble,” the British public were informed that Theresa May, the current Prime Minister, was about to make a mistake not dissimilar to the one that Neville Chamberlain made in March 1939. Apparently, May was about to set our country on a course that could very well end up in a world war. It was reported that May had ordered British submarines armed with Tomahawk cruise missiles to move within range of Syria, so that Britain can participate in an American-led attack in that country.[1] As we now know, Britain went ahead and participated in those attacks.[2]

On 31st March 1939, Chamberlain stood in the House of Commons and made one of the worst political blunders in British history:

At the subsequent debate in the House of Commons, the former Prime Minister David Lloyd George said:

The Prime Minister said to-day that he has spoken plain words. That is not enough. You must make it clear that you have the means of implementing those words. There are two objects you must have in view. One, of course, is that if Herr Hitler does march you will be able to meet him and beat him. The other is even more important, and that is that you should make it quite clear to him that you can do it. Then he will not attack. Is it clear? If war occurred to-morrow, you could not send a single battalion to Poland. Let us speak quite frankly. France could not. She would be confronted with fortifications which are infinitely more formidable than the Hindenburg line, which took us four years to break through, with casualties running into millions. [Interruption.] I am sorry to speak what is unpalatable, but I owe a duty to myself and to the country.

I cannot understand why, before committing ourselves to this tremendous enterprise, we did not secure beforehand the adhesion of Russia. […] I ask the Government to take immediate steps to secure the adhesion of Russia in a fraternity, an alliance, an agreement, a pact, it does not matter what it is called so long as it is an understanding to stand together against the aggressor. Apart from that we have undertaken a frightful gamble, a very risky gamble.[4]

In the years immediately prior to Chamberlain’s unsolicited war guarantee, the first priority in the British government’s military plan had been to create a defensive air force to protect the country from German bombers. The second priority, according to the British government, had been to develop the Navy in order to protect Britain’s trade routes. The third priority had been to maintain an Army for “Imperial Police Duties” overseas. Last on the list of British priorities was “co-operation in the defence of the territories of any allies we may have in war.”[5] 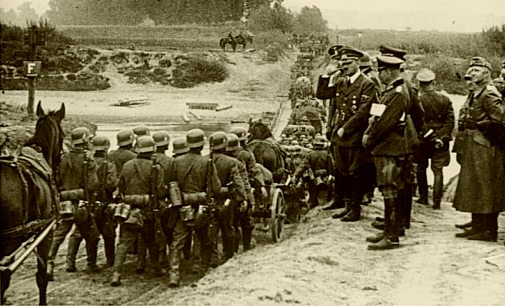 So Britain did not have the military capability to stop the Wehrmacht from invading Poland. As the British Chiefs of Staff had reported as early as 1937, a war with Germany would have to be “a long war”. Britain would have to resist an initial German attack (on Britain, not Poland), then use the industrial and economic power of the Empire to build up British forces, before finally launching a counter-attack. As the Chiefs of Staff stated, the military intervention of Russia, and material assistance from America “would go far towards making the Allied counter-offensive possible.”[6]

After the British government made their unsolicited war guarantee to Poland, they tried to get the Soviet Union onside, but that was never going to happen. In a speech in Moscow on 10th March, Josef Stalin had stated that he would “not allow our country to be drawn into conflicts by warmongers who are accustomed to have others pull the chestnuts out of the fire for them.”[7]

There was nothing inevitable about Britain’s involvement in a world war. After Halifax visited the top Nazis in November 1937[8] and let them know that Britain had no issues with “alterations in the European order” involving Austria, Czechoslovakia and Danzig, Germany approached Poland and suggested that the two countries join forces against the Soviet Union. In January 1939, Hitler told Josef Beck, the Polish Foreign Minister, that “Purely from the military point of view the existence of a strong Polish Army meant a considerable easing of Germany’s position; the divisions stationed by Poland at the Russian frontier saved Germany just so much additional military expenditure.”[9] As we now know, Germany did not invade the Soviet Union until 22nd June 1941, but once the war on the Eastern Front started, it dragged on for years, and bled the Wehrmacht close to death. As Churchill himself acknowledged at the Kremlin in 1944, “I have always believed that it is the Red Army that has torn the guts out of the filthy Nazis.”[10]

What would have happened if the British government had not issued an unsolicited war guarantee on 31st March 1939, but had instead pressured the Poles to do two things: Live up to the principle of self-determination and allow the people of Danzig to choose which flag flew over their town, and let the Germans build a road to East Prussia?

It is possible that the situation would have stabilised enough to avoid a world war. The Poles may have realised that taking on the Wehrmacht in order to prevent the people of Danzig from choosing the form of government under which they were to live was not a rational course of action. And if the Germans wanted to build a road to East Prussia, then there was no good reason to refuse permission for such a project. If the Poles had relented on these two points, then the German invasion of Western Poland on 1st September and the Soviet invasion of Eastern Poland on 17th September may never have happened. Britain and France would not have been in the position where they had to declare war on Germany in September 1939. Hitler could have ignored Western Europe altogether, and sent the forces of the Wehrmacht to the East, in pursuit of the ultimate goal of achieving Lebensraum for the German people.

Hitler had said in Mein Kampf that:

The foreign policy of a volkish State must first of all bear in mind the obligation to secure the existence of the race incorporated in this State. This must be done by establishing a healthy and natural relationship between the number and growth of the population on the one hand, and the extent and quality of its soil on the other. […] However, when we speak of new land in Europe today we must principally bear in mind Russia and the border states subject to her. Destiny itself seems to wish to point the way for us here.[11]

When the former American President, Herbert Hoover, visited Britain in 1938 he was invited to meet the Prime Minister. In the course of their conversation, Hoover told Chamberlain:

Now the face of Germany is turned east. They are a land people; they demand more space and natural resources to exploit with their expanding people. Being land hungry, the only great land expanses open to them are in Russia and the Balkans. Add to all this an underlying desire for revenge, a revival of German unification, dictatorship, growing armies, the urge to destroy Communism, and Hitler’s unstable character. These are bound to explode sometime. My hunch is that another Armageddon is coming. My hope is that if it comes, it will be on the Plains of Russia, not on the Frontiers of France.[12]

If Germany had managed to recruit Poland, and had begun their death struggle with the Soviet Union in the spring of 1940 instead of waiting until 1941, that could very well have been Hitler’s only war. After the Nazis launched Operation Barbarossa, Josef Stalin wrote to Churchill: “It is easy to imagine that the position of the German forces would have been many times more favourable had the Soviet troops had to face the attack of the German forces not in the regions of Kishinev, Lwow, Brest, Kaunas and Viborg, but in the region of Odessa, Kamenets Podolski, Minsk, and the environs of Leningrad.”[13] How much more favourable would the position of the German forces have been if the Poles had accepted in 1939 that they were trapped between two countries that were destined to fight one another, realised that they had no option but to choose a side, and had elected to take a ride on the German war machine? If the Polish troops had fought against the Red Army, and Hitler did not have to keep back any of his Wehrmacht troops to occupy Western Europe, and the starting line of the invasion was half a country farther east, then the bloodletting on the Eastern Front would have been even greater. The two most evil regimes on the face of the planet could have spent the next decade fighting the ultimate war of attrition, and instead of being dragged into a world war by Chamberlain’s unsolicited guarantee, the rest of the world could have sat back and enjoyed the show.

Rather than avoiding foreign entanglements in areas of the world where Britain had no vital interests, and where it was possible, attempting to steer external events towards a scenario where two evil and powerful regimes ended up fighting one another at no cost to Britain, Chamberlain interfered with the decision-making process of Poland and only managed to make a war more likely (this is acknowledged in the Cabinet meeting notes of 19th April 1939.)[14] As the British military historian Basil Liddell Hart wrote:

The Polish Guarantee was the surest way to produce an early explosion, and a world war. It combined the maximum temptation with manifest provocation. It incited Hitler to demonstrate the futility of such a guarantee to a country out of reach from the West, while making the stiff-necked Poles even less inclined to consider any concession to him, and at the same time making it impossible for him to draw back without ‘losing face’.[15]

The British people have already seen one misguided politician make a decision that needlessly dragged Britain into an unnecessary war which spread around the world, lasted for years and cost millions of lives. The dim bulb we have somehow ended up with as PM in 2018 now appears to be intent on helping America to start a war against Putin’s Russia in an Islamic hell-hole halfway around the planet. Of course, if starting another unnecessary war is on your “to do” list, then it makes perfect sense to sack hundreds of highly trained Royal Marines five minutes before kick-off! (These elite troops are now working as scaffolders and labourers all around the country.) Whatever May thinks she is going to achieve by shooting off a few missiles in the direction of Syria, it is almost inevitable that she will only make the situation worse, and a war with Russia more likely.[16]

122 thoughts on “Two Minutes to Midnight”