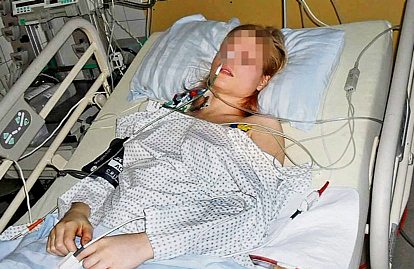 “We want everyone to see what was done to our daughter”

Germany — Vivien, 24, was stabbed down and critically wounded by a 17-year-old Syrian refugee last Saturday, when she and her boyfriend were shopping for groceries in the small German town of Burgwedel (see the report Bloody Weekend — Knife Attacks All Over Germany). She had to undergo emergency surgery and remained in critical condition.

The prosecution has opened an investigation against the boy for battery. His family, who came to Germany as refugees in 2013, issued a statement that they are sorry about the incident, however, “they want it investigated how it might have come to him stabbing out.”

Vivien (24) was stabbed down and critically injured by a 17-year-old Syrian refugee when she was shopping.

The Parents of Knife-Victim Vivien (24) Reproach:

“Everyone should see what was done to our daughter”

The 24-year-old woke up from her coma — this is what her lawyer and her boyfriend have to say.

Hannover — Sensors watch over her somatic functions, tubes sustain Vivien K. (24). The young woman is in intensive care — she was the victim of a knife-stabber after an argument in the supermarket.

“We want nothing more than for our daughter to get well again. But we also want everyone to see what happened to her,” say Vivien’s parents.

The doctors had to remove her spleen, and part of her pancreas. Her ribs are broken. Four days after the knife attack, on Wednesday, she woke from the artificial coma.

Flashback: On Saturday, she and her boyfriend Domenic K. (25) were shopping a supermarket in Burgwedel (Lower Saxony), and happened upon two cousins (13, 14), who were allegedly wrestling. Vivien, who is a shop assistant, asked the two to stop it.

Outside, the couple met the two again, with a brother (17). He stabbed Vivien into the belly with a jackknife. Domenic: “I thank God that Vivien is still alive. The doctors said two centimeters made the difference between life and death.”

The alleged perpetrator is in custody and has remained silent. He came to Germany as a Syrian refugee in 2013. He is charged with dangerous battery.

[Photo caption (not shown): The suspect (17) on the way to the committing magistrate]

According to a relative, Domenic pulled one of the children by the ear before the attack.

The victim’s attorney Björn Nordmann: “In my preliminary assessment of the issue, it is an attempted murder. The alleged perpetrator approved of my client’s possible death when he brutally stabbed her.”

A spokesman for the public prosecutor: “Our investigations are just beginning; we still have to interview witnesses. It is possible that we will then assess the issue differently.”