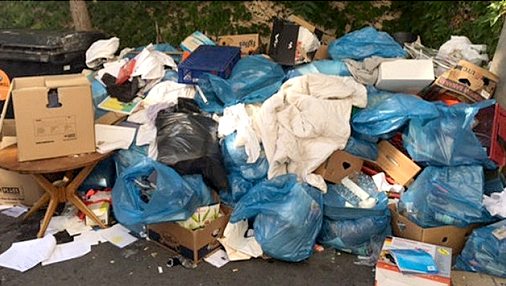 Asylum seekers in Austria have been hard on their government-assigned accommodations. One hotel in Vienna suffered particularly extensive (and expensive) damages.

Many thanks to JLH for translating this article from Kronen Zeitung:

Papers in the Ruins

Beds and whole series of kitchen implements stolen, walls defaced: In only 17 months, asylum applicants caused €32,000 of damage in their quarters in the “Hotel Bianca” in Vienna’s Favoriten district. The Fonds Soziales Wien (FSW, Vienna Social Fund) financed the housing of 90 persons with €2 million and will now require repayment of tax moneys from the management. Interestingly, part of the bookkeeping was found in the ruins.

“Our system of controls functioned. We ended the contract with the private organization as early as June,” said Peter Hacker, head of FSW, confirming the payment since April 2016 of €2 million to the organization for the care of 75 to 90 asylum seekers. So the asylum hotel cost €117,647 per month or €3,921 per day.

“All Expenditures for the Refugees Must Be Confirmed”

The FSW will now demand a detailing of actual costs from the management of the organization. Peter Hacker: “All expenditures for the refugees must be confirmed by receipts.” If they are not, repayments will be due.

The private landlord also left a large portion of the record-keeping lying around in the devastated “Hotel Bianca” in Karmarsch Street in Favoriten. It includes documents evaluating the asylum seekers in the German course, with all the names. “Hamid W. inattentive, annoyed” or “Jafar R. constantly telephoning, sleepy” and Bahman A. not serious” or “Michael Jackson (!) tired, inattentive, absent” and so forth. There were also some complimentary evaluations: “Jamshid H. Is making progress” and “Ali Madad is diligent.”

Hacker also considers it unacceptable that the documentation on the asylum seekers is lying around in the open. “That is not good. I have never seen anything like that.”

Tips on Surviving When Someone is Running Amok

The Krone team looking around in the “Hotel Bianca” found another document: “A checklist for spontaneous actions in refugee housing” on two cards.

For their own protection, asylum applicant caretakers should react correctly in the event of the following “special incidents”: threats, physical injuries, bomb threats, melees of a threatening character, sexual violence and the finding of addictive substances.

The advised action in case of possible amok rampages in the asylum quarters: “Use any secure possibility of escape!! No attempts at rescue from directly endangered areas; lock yourself in.”

13 thoughts on “Welcome to the Hotel Austria, Such a Lovely Place”