Today is Reformation Day, the 500th anniversary of the day Martin Luther nailed his Ninety-five Theses to the door of the All Saints’ Church in Wittenberg. In honor of the occasion, our long-time reader Steven Davis sends this guest essay about the life and teachings of Martin Luther. 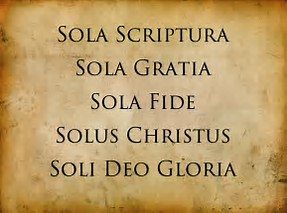 The Five Solas: Only Scripture / Only Grace
Only Faith / Only Christ / Only the Glory of God

The Five Solas, Then and Now

Martin Luther stated all that is needful for the person who would come to God and enter into a covenant with Him. That person comes by grace alone, through faith alone, through Christ alone, by the Word of God alone, to the glory of God alone. Man has neither place nor authority nor involvement in what God accomplished, which had its beginnings before creation.

Martin stated what he knew to be true. He questioned the Catholic Church’s ability to grant pardon for sin when it was Christ alone on the cross alone Whose blood alone paid the price for the ultimate plenary indulgence that freed all those born of a woman from the shackles of sin that would drag them to the grave and then onto hell for eternity.

How then could the Catholic Church sell what it did not own, nor had anything to do with? It couldn’t, and it had neither legal nor moral right to take money from its membership in exchange for a promise that it could not deliver. What the Church lacked in spiritual authority it made up in temporal authority, as the “Vicar of Christ” decided who would rule over its membership, which was compulsory for all who lived in Medieval Europe. Charles V, the Holy Roman Emperor, ruled Europe in Martin Luther’s day and did so with the Church’s blessings, as both were in agreement as to what the people should hear, believe, and obey. The Church and State were indeed married.

When Martin Luther stood before the assembled council of Lords at the Diet of Worms and refused to recant his statements regarding the clear message of Scripture and his position on the sale of indulgences, as well as church offices that were often sold to the highest bidder (Simony), he was excommunicated and was to have been burnt at the stake as William Tyndale had been in England by Mary, Queen of Scots. Martin would have died the death of a heretic had it not been for a German prince who saw the truth of what Martin was saying and spirited him away to his castle, where Martin remained under his protection for about ten years, during which time the New Testament and then the entire Bible were translated into German so that the volk could read and understand for themselves the truth of the Word of God, something the Catholic Church had forbidden for 325 years since 1198 AD.

In his quest for truth and righteousness, Martin Luther drew on the inspired writings of another monk who had also had extensive training as a lawyer and was well-studied in scripture, and had asked the same questions that Martin Luther had. Romans 1:17 had been Martin’s wake-up call, and it had also been Paul the Apostle’s wake-up call almost 1,500 years before. How can sinful unrighteous man stand before a holy and righteous God and not be immediately condemned to the fires of hell where he belonged with Satan and the rest of his demons for his willful acts of sinful disobedience? How could man repent or even find favor with God given his awful spiritual condition? What God showed Paul was the same as what God showed Martin Luther. It is by Grace (unmerited favor) alone, through Faith (taking God at his Word) alone, by Christ (the Way, the Truth, and the Life and the only path to God) alone, by Scripture (the Word of God, which is eternal) alone, to the Glory of God (whose sacrifice for us on Calvary was from before the foundation of the world) alone.

Paul also lived during a time when the Church of Roman pagan idolatry was married to the state. The Caesar was regarded as a son of the gods with divine authority. To believe otherwise was treason and to preach another divine authority besides Caesar was tantamount to fomenting sedition. Paul died the death of a traitor for preaching and teaching that Jesus Christ is the only Son of the true and living God. Martin Luther almost died a similar death at the hands of a Holy Roman Emperor for preaching and teaching the same Truth that Paul did.

Today, 500 years later, we see that nothing has changed. Interdict has been decreed by Rome, which has since moved to Brussels, against all who would preach and teach the whole counsel of God without compromise. As the State once again attempts to exalt itself above the knowledge of God and to be regarded as God with the authority to dictate right and wrong, the Martin Luthers among us are being rounded up and consigned to jails while the criminals and insurgents are allowed to run free and commit rape, pillage and murder upon a law-abiding citizenry. Unrepentant man (humanity) has not changed, and neither has God and His requirements for fellowship with Him. With heartfelt joy I declare that adoption into the family of God is by Grace alone, through Faith alone, by Christ alone, in the Word of God alone, to the Glory of God Almighty alone. Amen!

51 thoughts on “The Five Solas, Then and Now”