This is what happened to General Robert E. Lee and his horse Traveller in Emancipation Park (formerly Lee Park) in Charlottesville, Virginia, on August 23, 2017: 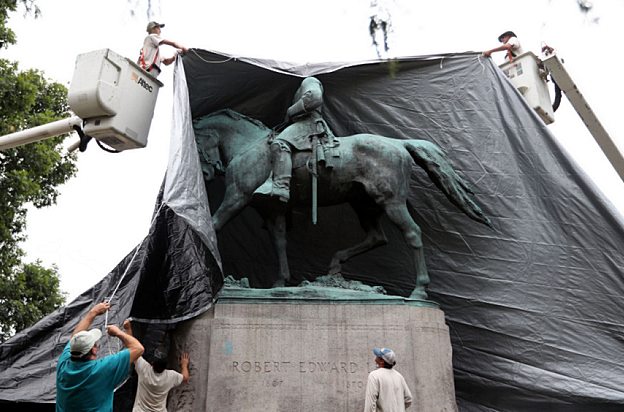 (Read the story in The Daily Progress)

You thought it was over when you signed the surrender document, didn’t you?

That was on April 9, 1865, in Wilmer McLean’s parlor in Appomattox Court House, Virginia. You gained an honorable parole for the men under your command. You advised your subordinates not to continue the conflict as a guerilla war. You laid down your sword and retired to your home.

You thought it was over, didn’t you?

One hundred and fifty-two years later, and it’s still not over.

Your enemies will not be satisfied until every daguerreotype, every painting, every engraving, every statue of you is effaced from our public spaces. They will not relent until your name has been scrubbed off, painted over, and chiseled away from every wall where it appears.

You and Traveller will have to endure the Confederate Burka for a while. But only for a while. Soon enough you and your soldiers and your valor and your love for your homeland will be completely erased. You will be relegated to oblivion. Not a trace of you will remain. You will have been deconstructed.

I’d like to say a quick word about what that statue of General Lee means to me. Personally.

It means that my great-great-grandfather served honorably in the War of Northern of Aggression. He rode to the Second Battle of Manassas and fought in defense of his homeland, the Sovereign Commonwealth of Virginia. He was in the Army of Northern Virginia under the command of General Robert E. Lee.

His country had been invaded by an army that confiscated property, torched farms and fields, and took civilian hostages. He and his brother, my great-great-great uncle, volunteered to fight to defend their commonwealth against that invasion.

When he returned home to his plantation between Richmond and Petersburg — yes, he was one of those slave-owners — he found that his house and property had been burned by the invaders. What little the family had saved had to be lowered out of the windows at the last minute.

He served his country, and his country lost the war. He and his family lost their wealth and were reduced to penury.

He paid the price. And hundreds of thousands of his comrades-in-arms paid an even higher price. They paid the ultimate price.

And hundreds of thousands of brave men on the other side paid the ultimate price.

The debt has been paid.

So the Recent Unpleasantness should be over. But it isn’t over. It won’t be over until the bones of the last Confederate soldier are dug up, crushed to powder, and scattered to the four winds.

Will that satisfy the enemy?

How can we cut this canker from our collective soul?
How can one forget? Millennia hence,
When English is just the language of the scholiasts
Or the key to ancient software, Gettysburg
Will mean no more than Thermopylae does to us,
And Jackson’s tactics, like Hannibal’s,
Will be studied by commanders
Training for the galactic wars.

Then Appomattox will no longer appear on any map,
With Bull Run just a vague rumor,
A place somewhere off to the east
Of the Blue Ridge Islands.

16 thoughts on “The Confederate Burka”