The following report by Egri Nök was posted earlier today at Vlad Tepes in a slightly different form. 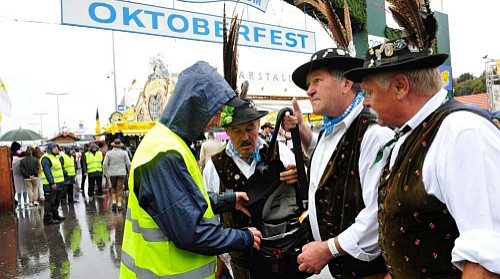 Suspicious-looking locals getting examined at the Oktoberfest gates. Why would a little control, a fence, and a bit of a terror alert, put anyone off from having fun, anyway? (photo: Merkur/Schlaf)

Disastrous Stats: This is the bitter balance sheet of ‘Wiesn’ [shortened name of Oktoberfest] 2016

The city of Munich has announced the accounting for Oktoberfest 2016 in a statistics publication. Visitors, beer, bratwurst — there was a strong decline just about everywhere.

Only 5.6 million visitors came to the largest Volksfest in the world. A record low of the last 16 years. Affairs were bleak for the Wiesn-Innkeepers, too: only 66,231 hectolitres of beer were drunk in 2016, 15 percent less than in previous years.

Innkeeper spokesman Toni Roiderer cites the bad weather at the start of the Wiesn, and the fear of terror as reasons for the decrease.

But there is good news, too

13 thoughts on “It’s Not Your Father’s Oktoberfest”