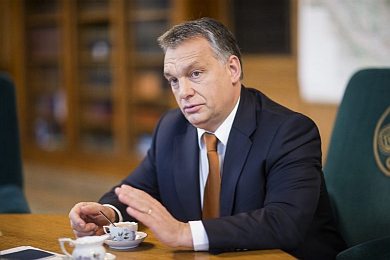 The following article summarizes a letter that was written by Hungarian Prime Minister Viktor Orbán to Jean-Claude Juncker, the president of the European Commission. The letter was a response to the EU court’s decision about the migrant quota, and to Juncker’s demand that the quota be doubled, essentially converting it into a permanent migration regimen.

CrossWare, who translated the summary, includes these introductory notes:

The propaganda about the “cohesion funds” goes like this: the “fascist suppressing dictatorships” of Central European countries are milking the poor (but rich) well-intentioned Western countries… they are essentially only alive and not starve to death, because they receive these subsidy payments, and when the time comes to do a little work of their own, they are refusing to “help” and show “solidarity”.

The cohesion funds were intended for infrastructure improvement, which was and is in the best interests of the companies and political institutions of the EU. Without roads and communication they could not establish their factories at locations with cheap but well-educated labour. Also, it is the price paid for handing over the keys to their markets and local industry (which usually get quickly bought out or ruined by the wealthy Western competitors).

They also turned the cohesion payments into a money-recycling game. For example, the German government gives some funds to Hungary to improve telecommunications. Then somehow the company that will work on the project ends up being a German company. The same thing happens with the French and others.

Pretty strange coincidences, but of course always the Central European countries are said to be the corrupt ones and the Western ones are the beacon of openness, fairness and democracy…

Neither is in line with EU law nor with historic Hungarian traditions, as the chairman of the Brussels Committee interprets solidarity — Prime Minister Viktor Orbán wrote, among other things, in a letter to Jean-Claude Juncker, President of the European Commission, the content of which was provided to the media by Press Secretary Bertalan Havasi on Thursday.

“First I acknowledge with satisfaction that you also acknowledge Hungary’s efforts at border protection. In the past two years Hungary has defended its borders with a huge burden, leveraging Hungarian budget resources, building a fence and putting into service thousands of border guards,” wrote Viktor Orbán, who reiterated the position he already expressed at the meeting of the European Council of Heads of Government and Heads of State — that Hungary should always behave as a country where there is a Schengen border, but for geographic reasons, migrants can only cross from borders of the European Union, especially in Greece.

“Therefore, Hungary has not participated so far and will not want to participate in projects that do not make this issue clear,” said Viktor Orbán. “In the name of the Hungarian Government, I would like to make it clear that in our opinion the interpretation of the principle of solidarity is not in accordance with European Union law and is inconsistent with historic Hungarian tradition,” said the PM, pointing out that, that in contrast with some major EU Member States, Hungary does not have a colonial past.

Viktor Orbán labeled “incomprehensible” the passages of Juncker’s letter that would link the issue of immigration and cohesion funds. “Such a relationship does not exist, and this is not permitted by current European law.

“In the Hungarian Government’s view, most of the resources of the cohesion funds ended up with the companies of the paying countries. Thus, the economies of the large EU Member States have profited a lot from the spending of cohesion funds. Also from the opening up of the markets in the new Member States,” the prime minister said. ”I am surprised and uncomprehending that you and the European Commission are not willing to give money for the fence. I am convinced that whoever does not support the fence does not know or want to defend the citizens of the European Union. In the case of massive attempts to illegally cross borders, it is impossible to defend them without physical obstacles. If instead of defending the borders, the European Commission is only willing to finance measures and institutions for the reception and distribution of migrants, instead of halting migration, we would only provide new incentives for hundreds of thousands of migrants, who would change their course for Europe. [translator’s emphasis]

“That is why I would like to repeat the Hungarian Government’s request for the European Union to pay half of the cost of building the fence, which is 270 billion forints over the last two years, and up until now paid entirely by Hungarian taxpayers; yet the fence and Hungarian border guards are protecting not only Hungarian citizens, but also Austrian, German and other EU citizens,” concludes Viktor Orbán’s letter to Jean-Claude Juncker.

17 thoughts on “Viktor Orbán to Jean-Claude Juncker: “Whoever does not support the fence does not want to defend the citizens of the European Union””