Our Dutch correspondent H. Numan wades into the Culture Wars with a discussion of what is now commonly known as “trans”.

A note from the author on the photo below: “Both people are reporting for the draft, but the monk has a much better chance of having to serve. (Shows in their faces.)” 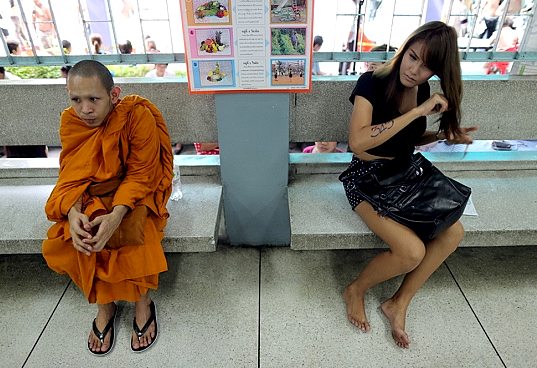 The dark truth about gender equality

Gentle men and women, can you keep your nutcases under control, please? I can’t really write men and women anymore. How should I address you? Beloved comrades of the Gates? Dear readers? Your social justice warriors (or whiners, as I see them) are spreading with gusto and enthusiasm to Europe. Amsterdam and the Dutch Railways NS will no longer use proper genders, as it might offend some seriously disturbed people. Men who think they are women and vice versa.

Amsterdam also wants to ban smoking in its entirety within the city, while we are at it.

To start with the latter, I merely have one simple question: tobacco is a huge cash cow for any government. Do you honestly believe your government will simply forgo that enormous source of income? If smoking is banned, are you going to pay it? If you, activist non smoker, don’t want to pay it, who should? The (now ex) smokers have stopped, as you desired. They can’t afford it anymore. It’s your turn, or do you really think it works any differently?

Now back to the gender-benders. I happen to live in one of the few countries on earth with a fairly substantial percentage of ‘kathoeys’ as we call them or ladyboys. Men who feel they should have been born women, or women who feel they should be born as men. Mainly men, though. Very few women. I’ve met quite a few here in my 25 years in Thailand, and I’m still mystified by them.

Many of them begin to notice their different feelings in high school. They very often dress as girls, which means wearing girls’ uniforms in school or university. In Thailand everyone in the educational system wears a uniform. Red in preschool, khaki in primary school, blue in high school and black on universities. Girls wear skirts, boys trousers. You are probably amazed to hear that points for good behavior are also given on universities. Berkeley activists very likely wouldn’t be able to graduate from a Thai university… However, ladyboys are allowed to wear skirts in most universities and a lot of high schools.

Some schools set up ‘third gender’ bathrooms, if the number of ladyboys is high enough to warrant the extra cost. Thais are fairly easy going with regard to sexuality. Don’t get me wrong — boinking in the streets is a definite no-no. Showing affection in public is also frowned upon. Kissing in public for example, is something not really done here. Whatever you do, you do it in private.

Thailand is a Buddhist country, with no real monotheistic stigma on sex. If you’re hungry, you eat. If you’re thirsty, you drink. If you feel randy, well … Fill in the blanks. But not in public! Most boys loose their virginity in brothels, where they are taken by their peers. On one hand, Thais are very prudish, much more so than in the West. On the other hand, anything goes. It never ceases to amaze me.

Living together as a gay couple is completely normal here. But not legally married. My Dutch marriage is not valid in Thailand. Funnily enough, about half the residents of my condominium live together. Nobody blinks an eye. There is talk about legalizing gay marriage, but there is also talk about legalizing marijuana or building the Kra canal. Don’t hold your breath, though.

Parents aren’t exactly thrilled with joy if their son decides he’d rather be a girl, and starts acting as one. But mostly they go along with it. Nor are their peers very sympathetic. Teasing and bullying happen a lot. That’s why ladyboys often stick together, and probably one reason why there are so many in Thailand. The older ladyboys get the hormones the younger ones want but cannot buy in the pharmacy due to the age limit. The pill is only available for 16 and over.

Now the darker side of the story. If you’re young you are immortal. Death is somewhere far, far away in the future. Other people die. Not you. Same goes for beauty. Beauty eventually fades away. No matter what you do. Most of us accept that fact, but it is something extremely difficult for kathoeys to accept. Not surprisingly, the suicide rate is unbelievably high amongst them.

Politically correct activists will tell you immediately that is because they have very few opportunities in life. True, most of them end up in prostitution, crime or as a hairdressers for ladies. A few find work in a cross-dress cabaret. Alcazar in Pattaya is world famous, and highly recommended. Also in Pattaya gangs of ladyboys are notorious. Remember you’re dealing with a bloke here, even though they can look petite. Most of them have a lot of (practical) experience in Muay Thai kick boxing, which helps greatly with robberies or purse-snatching.

Almost all of them desire something that is manifestly impossible: marry a rich Westerner for life who isn’t into ladyboys… Your chances of winning the lottery are a lot better even if you don’t play.

Yes, they are much better accepted here than in the West. Still, they are on the fringe of society. Some became famous TV stars. I met one of them. S/he is about my age, but looks a lot better. Most of them aren’t that lucky or capable. Old age will catch up with them a vengeance. That’s when a lot of them discover that their life really is over. I’ve seen some really ugly ladyboys aged 50 or over. Plain scary in the dark. They didn’t care, but most do. The suicide rate is obscenely high. I’ve read reports which show that nearly half of all ladyboys commit suicide for some reason sooner or later.

Nobody really likes growing old; women especially tend to spend a lot of money and effort to look pretty. That amount of money and effort dwarfs with what ladyboys have to go through. They literally sacrifice their manhood and dedicate their entire lives pursuing an impossible ideal. I’ve met some ladyboys even a blind man could spot a mile away. Way too tall, shoulders too broad, voice too low. Mannerisms too burlesque. Most of them are more difficult to spot, but somehow I rarely miss them. I don’t recall ever meeting a lady who wasn’t a lady and not knowing it. Perhaps when I just had arrived in Thailand, but one learns quickly.

Yes, I agree that being able to pursue a more meaningful career could help. Better understanding might help too, though (Western) activists have no idea what that word really means. Thai acceptance goes light years further than most people think possible. Still, about half of the teenage boys who start dressing up commit suicide later in life. That’s not because they live on the bottom of society; lots of people do here. Simply because Sic transit gloria mundi or in plain English Thus passes the glory of the world. I’m absolutely certain many if not most of them end their lives because they can’t accept that.

That’s in Thailand, where acceptance of ‘the third gender’ is the most tolerant in the world. No other nation even comes close. So why, all of a sudden, are the progressive left fighting to “liberate” what I know to be very sick puppies? Actually, real gay people have already been thrown in front of the bus. If you happen to be gay, don’t want to have kids and don’t think the right to adopt is an inalienable gay right, and most of all, if you are gay and find mohammedans rather questionable with regard to gay issues, you are a bloody nazi in the eyes of the left. Why?

Part of it is ignorance. Hardly a soul knows what I just wrote down from personal experience. Fighting for issues to annoy your elders is now a Western tradition. What was shocking at Woodstock is old hat now. Not shocking enough. We’ve had the punk fashion where people seriously mutilate themselves with paper clips and weird hairdos. When that didn’t shock anymore people converted to islam. What else is left? Self-mutilation itself is nothing unusual in history. Lots of religious sects practiced it and practice it today; for example the priests in the Cybele cult did. As with kathoeys, they did it strictly voluntarily.

But the dark secret here is planning. Communism ruled for 74 years. It went bust, but never really died. They regrouped and are now back with a vengeance. They operate under different names. Almost all previous communist groups call themselves socialist or green. Their activism is exactly the same. They merely changed tactics. Of course ladyboys make lousy soldiers. “Chelsea” Manning is a shining example. Assume it (he? she?) was not only given a full pardon but also a rank and a combat position under the Hillary Clinton administration. Not possible, because poor Chelsea needs lots of attention from psychiatrists, specialized doctors, expensive and rare medications, special treatment, understanding troopers and god knows what else. It couldn’t fight itself out of a sleeping kindergarten, let alone anything more dangerous.

Imagine the military gets the order to hire those seriously deranged people unconditionally. Not much of an army would remain, would it? Now imagine those sick puppies in the police and the civil service. Why fight a revolution yourself, if you can emasculate your enemy far more easily?

Also consider the mohammedan view on genders. Not much to debate here. Either you’re male, or you’re property of a male (= female). No other choices. Apart from a few stonings and a high building to jump from here and there. That elusive moderate mohammedan (a breed much rarer than living dodos) doesn’t want to have anything to do with it, but what the heck. Never interrupt your enemy when he’s making a mistake! The moderate mohammedan will see Chelsea as a kind of goat at best. You can hump it, for want of anything better. That’s as far as it goes. A real mohammedan wouldn’t want to touch it even with a ten feet pole. Unless there’s an ax attached.

But Western governments are seriously distracted by this issue, the media stoke up the fire, and the attention is focused away from real issues. Addressing men and women ‘properly, with equality’ is so much more important than illegal immigrants or the war against the West mohammedans are fighting.

I spoke more than 30 years ago with one of those activists. We had a few beers and he was well in his cups. In vino veritas, as they say. I’ve never forgotten it, neither should you. “Sure, I know very well we’ll never win a democratic election. Utterly impossible. We also know that we (extreme right wing and left wing alike) only gain popular support during times of great distress. That’s what we want to achieve. A civil war of some sort. Only then we will be able to win.”

41 thoughts on “The Dark Truth About Gender Equality”