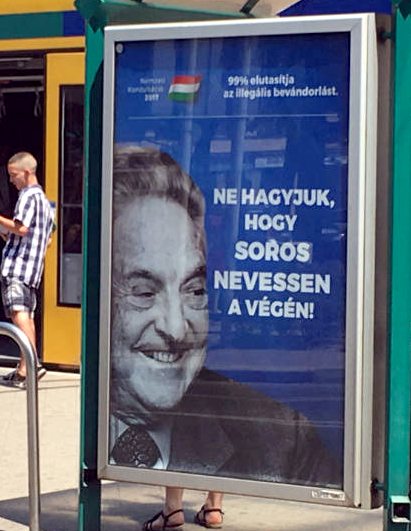 Poster: ‘Let’s not let Soros have the last laugh!’

As reported here on Monday, the government of Hungarian Prime Minister Viktor Orbán has come under fire from liberal Jewish groups, both in Hungary and abroad. The issue is the government’s “Stop Soros” campaign, which aims to mobilize public opinion against Mr. Soros’ notorious migrant resettlement industry. Mr. Orbán being attacked for launching a supposed “anti-Semitic” campaign.

Based on the article below, it seems that Hungarian Jews are a lot like American Jews: in their political opinions, ordinary Jewish citizens tend towards the center, or lean right. But large, well-funded, internationally connected Jewish organizations are extreme-left progressives. These are the same groups that cry “anti-Semitic!” whenever anyone criticizes the policies of George Soros.

The following article about a Hungarian radio call-in program was published at the conservative portal PestiSracok.hu (Boys of Budapest). Many thanks to CrossWare for the translation:

Several Hungarian citizens who are Holocaust survivor phoned the Karc FM radio station on Monday’s “Paláver” program and supported the Orbán government’s migration policy, taking a stand against George Soros’ actions. One of them, Ottó Gyepes-Gilbert, stated: the anti-Soros poster campaign is not anti-Semitic. Another caller asked everybody to help Viktor Orbán next year, not just a majority of two-thirds, but a three-thirds victory.

If Lajos Bokros [former finance minister from the Liberal government. The result of his restrictive program was essentially to lead the Hungarian economy to the brink of bankruptcy — translator], András Heisler [President of the Hungarian Jewish Association of Religious Communities = MAZSIHISZ — translator] or Gábor Horn [Liberal politician with a Jewish heritage — translator] had listened to Monday Paláver on Karc FM, they probably would have had a heart attack.

In the show, several Jewish people — who were also proud Hungarians — called in to give their opinion about the Bokros gang’s “anti-Semitism industry”. Memorably, Bokros, a few days ago on the Internet, called Viktor Orbán a “fascist” for the campaign against Soros, which he believed was anti-Semitic propaganda. András Heisler, the President of MAZSIHISZ, asked the prime minister in a letter to stop the “Soros” poster campaign, saying that he might conjure up anti-Semitic sentiments. The former attorney for the late SZDSZ [Free Democrats Liberal Party — translator] Gábor Horn thought that Soros was “one of the greatest Hungarians who ever lived,” who can spend his money on whatever he wants.

The callers mostly echoed the words of these three “gentlemen” in the show Paláver while they were chatting with István Stefka [right-wing conservative Jew — translator], the presenter for PestiSrácok.hu. For example, Ottó Gyepes-Gilbert, a Holocaust survivor, talked about the fact that the Israeli Ambassador in Budapest had probably been told by MAZSIHISZ President András Heisler that anti-Semitism was rampant here.

“What is anti-Semitic about this poster I do not know. I do not see Anti-Semitism as a Jew. Heisler might be,” said the 85-year-old man. He said he lived for nearly fifty years in the United States and moved home nineteen years ago, but never felt anti-Semitism in Hungary. István Stefka, the presenter, then asked Gyepes that what he thought about other Jewish people who did not speak up about the poster business, why they did not say the Soros posters are not anti-Semitic. To this Ottó Gyepes-Gilbert replied: in 1956, the cream of the Jews left this country, and those who stayed were mostly the ones who were tied to the Communist party, former ÁVH agents [State Protection Office — comparable in brutality to the Nazi Gestapo or the Soviet NKVD Secret Police — translator], or the ones who had elderly parents here. For example, in Újlipótvárosban [an area in Budapest, where many Jewish people live — translator], where I live, almost all are “new Jews”, who became “Jews” after 1989, but before the change of regime they “smeared Israel, foaming at the mouth.” “There is not a decent person among them!” said Gyepes-Gilbert Ottó.

A caller named Anikó said that she also resides in Újlipótváros, her mother was Jewish, so she is also considered Jewish, but since her father was not, Jews living in the neighborhood had mocked her. That is why she agrees with every word said by Otto Gyepes-Gilbert. In addition, she asked everyone else to help Viktor Orbán with their votes next year, not just a majority of two-thirds, but instead a three-thirds victory.

Another phone caller, Miklós Vajda, described the present situation as if we are seeing a snapshot: it is now clear who they are and who they are with. Here is George Soros, who organizes migration, and “threatens the existence of Hungary with his immense swindled wealth”. But Soros is just a “frontman” who has been pushed forward; he is actually represents the “deep state”, the caller said.

According to him, there are two kinds of Jews live in Hungary. On the one hand those who, like Ottó Gyepes-Gilbert, are Hungarians and Jewish. The other group includes the Jews in Hungary, “who live off of us, who are bootlickers for Soros, and who want to destroy the Hungarians at all costs.” He put Gábor Horn, ex-SZDSZ politician, into this later group, who called Soros “one of the greatest Hungarians who ever lived”. At the same time he refused Horn’s assertion: it is not true that the American speculator can spend his money on anything he wants — because he cannot spend it on destroying other peoples, in this case the Hungarians.

Péter Reiner, also a Holocaust survivor, who was abused by the police after the Fidesz rally on October 23, 2006, spoke on the show: he deeply agrees with the Orbán government’s policies on migration — even though there are other government policies he agrees with less.

Another caller explained how much the Orbán government is doing for the Jews. He mentioned that for the Jewish Olympics that will be held in Budapest, the government will spend thirty times more than Germans did in Berlin, but for the ones calling Hungary anti-Semitic “nothing is enough?!” (It is true that the three billion forints [$11 million, £8.6 million, €9.75 million] spent for this purpose also covers a newly-built sports center that the government intends to repurpose after the games to be a Jewish community sports center — T.P.)

Csaba Dömötör, Parliamentary State Secretary at the Cabinet Office of the Prime Minister, said on the program: “The Hungarian Government is not the only one that has serious debates with György Soros.” He recalled:

In the nineties, Soros launched a serious speculative attack on the British pound. According to news reports at the time, he snatched billions of pounds in profits in a short period of time.

The secretary of state mentioned that many people suspected the American speculator (Soros) participated in and had been guilty of the Asian financial crisis that exploded in the second half of the nineties. Concerning the migrant crisis, he noted:

Soros proposed to establish an institutionalized system for European acceptance of so-called “refugees”, and for distributing them. And it is no secret that in recent days there has been agreement between the EU institutions for the creation of a new asylum office, which we would much rather call an Immigration Agency because it would speed up the immigration procedures, asylum procedures, and family reunification. And ultimately, the institution would implement the settlement program too.