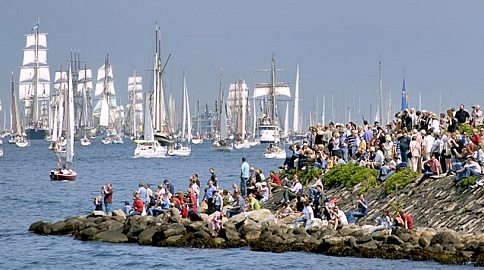 The annual Kiel Week regatta began this weekend in northern Germany, and the authorities are taking no chances on security. Almost twice as many police officers will be present compared with just a few years ago, new physical barriers and checkpoints have been established, and roadblocks place on major thoroughfares.

Egri Nök, who translated the police announcement below, sends this brief note about Kiel Week from Wikipedia:

Kiel Week (German: Kieler Woche) or Kiel Regatta is an annual sailing event in Kiel, the capital of Schleswig-Holstein, Germany. It is the largest sailing event in the world, and also one of the largest Volksfeste in Germany, attracting millions of people every year from all over Germany and neighbouring countries.

Kiel Week is at the ready. We have taken comprehensive precautions, and are announcing alterations in comparison to previous Kiel Weeks.

Clearly visible so-called “Big Bags” have been positioned downtown over the past few days. These bags, filled with a mixture of sand and gravel at 1.8 tons each, will be placed on the streets throughout the day on Friday at several locations. This establishes a means to direct the traffic, and points for traffic controls and barriers. In addition to that, it will prevent an unhindered breakthrough of heavy vehicles towards event areas.

Due to the nonspecific high terror alert, it is necessary for us for the first time to establish control points, and to issue a transit embargo for trucks during Kiel Week.

The control and barrier points downtown will be operating at several locations from noon on the weekends, and on work days in the afternoons until the events finish. The colleagues at the control points will conduct stops and visual controls on cars and trucks. There is a driving ban downtown for trucks of 3.5 tons and above, from mid-day (weekend) respectively afternoons (workdays).

In addition to the control points, from Friday on, there will be road blocks at certain times and at several locations on the transit roads to the event areas. These blocks will be equipped not only with the mentioned Big Bags, but also with constructional modifications and heavy devices.

As we, the Kiel police department, cannot provide the additional staffing with our own officers, colleagues from the whole state of Schleswig-Holstein are supporting us. The regular services of the precincts and stations are maintained as usual, so that there will be no restrictions for you.

Just as in prior years, we will be present, and approachable, with many mobile stations across town. The positions of the mobile stations, which will be operating from 12 o’clock noon each day, are at the main train station, the boat port, the Hörn, and the start of the Kiellinie at the Schlossgarten footbridge.

5 thoughts on “Extraordinary Security in Kiel During the Regatta”