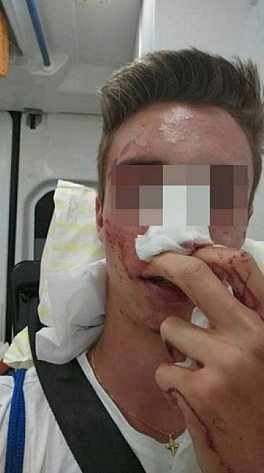 We’ve been spending a lot of time recently on the horrors and absurdities of Germany, so it’s time for a change: the following account describes a horrific attack on a native Swiss by migrants at the beach in the idyllic lakeside city of Lucerne.

Many thanks to Egri Nök for translating this article from Blick.ch:

Lucerne – a clique beats up Noah B.* (17) on the Ufschötti bathing beach in Lucerne. The attack is so brutal that the victim was almost blinded. Now police are onto the perpetrators.

When Noah B.* (17) talks about last Friday, his voice is still shaky. A group of youths brutally beat him up right in the middle of Lucerne, on the Ufschötti public bathing beach. “Without any reason at all,” he tells Blick.

It was around 11pm when Noah and two friends were strolling towards the lake. “We walked past a group of fifteen young migrants. The half-drunk men hollered at us,” the college student remembers. Noah ignores them, wants to keep walking on. But the situation escalates: “One of them came running after me and without any warning hit me in the face.” The pupil realizes that a second one is attacking him from the side. Then he goes down. Blood is running across his forehead. He has to spend the night in hospital.

His injuries reveal how brutal the attack was. Noah has lacerations, fractures on both sides of his nose, and a rupture in his left eye. Doctors at first could not rule out that he might go blind. Fortunately they now know: his eye will heal. But from now on he will always have an increased risk of glaucoma.

Girlfriend was scared for Noah

It is thanks to the intervention of the security staff who patrol Ufschötti that Noah did not suffer even worse injuries. The security staff immediately alerted the police. Successfully: Shortly thereafter the officers apprehended the migrant clique: “We stopped several people,” spokesman Kurt Graf tells Blick. “Investigations are ongoing.” It was still unclear exactly who was involved in the attack. Noah filed a criminal complaint.

Josef Moser (59) witnessed the police operation when he was closing his café at the public bathing beach. “It is terrible that something like this happens,” he says to Blick. Normally the Ufschötti in Lucerne has been safe: “Since the security forces patrol here, hardly anything ever happens. Even though in the evenings there are 50 nations here.” He, too, hopes that the perpetrators will be identified.

* Names known to the editors