Our Dutch correspondent H. Numan sends his postmortem of yesterday’s general election in The Netherlands. 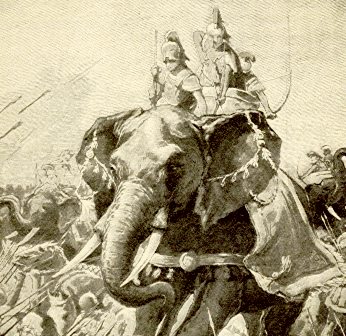 A Pyrrhic victory
by H. Numan

Mr. Rutte is ecstatic over his massive victory. He shouldn’t be. Remember that (in his days) famous general, Pyrrhus of Epirus? After the battle of Asculum he said ‘Ne ego si iterum eodem modo uicero, ullo milite Epirum reuertar’, or in English: Another such victory and I come back to Epirus alone. The VVD victory is Pyrrhic. They didn’t win anything at all; they lost less than others.

Wilders isn’t finished by a long shot. He threw his clog in the political machinery once again. Not by refusing to participate in the formation, but the opposite. He immediately offered his support and is happy to be part of any coalition government. Other parties always accuse Wilders being a dictator who either does it his way or not at all have to find new lies. Don’t worry; they are a creative bunch.

Yes, we all expected a lot better. But it’s not that bad at all. The VVD got a drubbing. They lost 25% of their support in Parliament, from 41 to 33. Politically speaking, the PvdA is a dead duck. It has never ever happened a party lost that much support in the history of our country. From 38 to 9. Down and out for the count. We won’t be hearing from them any time soon. Being good socialists that they are the party brass refuses to resign. Hans Spekman said the party will have to decide about that. Lodewijk Asscher didn’t want to become leader in parliament without a clause saying that he won’t be a sacrificial goat. With those two in control of the clown car I’m more than happy. On with the show!

Yasser Feras Klaver won’t be invited to participate. He disqualified himself completely on TV. In an interview his reply to all serious economic questions was ‘Yeah. So what?’ That endeared him to his teenaged girl voters, but nobody else. He’ll be politely asked for a chat and a cup of coffee, for appearances’ sake.

Next one to drop out of the formation: Emile Roemers. Our Dear Leader of the Socialist (=Maoist) Party said ex cathedra he won’t participate in any coalition with the VVD. Not a problem. He’s not required anyway. His party lost a seat. That’s really a terrible result, if you think about it. The PvdA got murdered and the SP couldn’t grab a bit of the corpse. He’ll be out of job probably next month, or as soon as they get a family member of Jan Marijnissen’s ready. That branch of socialism is a family business. In North Korea the Kim family, in Holland the Marijnissen family.

The most likely cabinet will be VVD — CDA — D66 with someone else. Likely the CU. That combination has worked together in the past; they got along fairly well. They all agree on the main points: more Europe, more compassion (=refugees), more multiculturalism (=islam). The bickering will be over how to divide the loot. Not reeling it in.

Their biggest problem is how to sell what they really want to the population. That brings us to what Wilders actually already has achieved so far. More multiculturalism is almost impossible to sell. Wilders has been proven right again in the row with Turkey. Rutte can, if he dares, settle things in an amicable way with Erdogan, but that will not exactly improve his trustworthiness. He’s already very weak in that department. Wilders, and nobody else, demolished the taboo on discussing multiculturalism.

One of the reasons why the PVV didn’t gain more is that the other parties copied his ideas; otherwise they couldn’t have defeated him. Rutte, for example, had no problem with a Turkish minister actively campaigning in the Netherlands. Just not at that precise moment. Now he has to act, though, whether he likes it or not. Van Haersma Buma (CDA) stole the PVV proposal to learn and sing the national anthem in schools. Three months before he voted against it. Now he presents it as his own handiwork.

Another reason why the PVV lost is simply lack of funds. All political parties are sponsored by the government, with multi-million dollar budgets. (When you are in parliament, you can vote for anything you want. Like free money.) Except one. The PVV is technically not a party (‘vereniging’) and cannot cash in. Their budget is really tight, as the Baron can confirm. Wilders’ protection is paid for by the government, but with limitations. If Wilders wants to hold a media interview or visit a city, he has to pay the tab himself. The same goes for other party members. Therefore, out of necessity the PVV couldn’t campaign as much as they wanted.

Another problem is that left-wing hooligans will torch your car, throw rocks through your windows or worse if they even suspect you being PVV member. Organize or attend a local meeting, you’ll need police protection — which you won’t get.

Without becoming a member of a new cabinet, Wilders already leads the way they will have to work. That’s no mean achievement. Having a dual nationality is now open for debate. Yes, the others parties approve of it. But now there is a monster of their own making: Denk. They got three seats. That’s a lot. That’s as much as the Staats Gereformeerde Partij. There are as many virulently mohammedan voters as strict Calvinists in the country now.

Forget any notion about Denk being a ‘pro-Arab’ party. They aren’t. Denk is as close as possible a branch of the Turkish AKP, Erdogan’s party. Believe me, if Kuzu wants to go to the loo he has to call Ankara for permission. It’s definitely not a pro-Arab party, not even a pro-all-mohammedans party. They are a Turkish party. The branch office of Erdogan within our parliament. There isn’t — yet — a Moroccan party, which is the only reason why Moroccans with a Dutch second passport voted for Denk. A lot of mohammedan former PvdA voters vote now for Denk.

Make no mistake: Turkey is furious. Here’s a list of what high ranking Turkish officials barfed out so far. The Dutch are:

That’s not from the man in the street, but directly from ministers and other top officials. Erdogan would love to punish The Netherlands, he just has no idea how. Mutual trade is less than 1%, and mainly from The Netherlands to Turkey. An economic boycott isn’t going to work in his favor. Dutch travel agencies already noticed fewer people booking holidays to Turkey. I wonder why that is.

Turkish retaliation so far was burning the wrong flag. They burned the French flag instead of the Dutch. A farmer threatens to kill his Dutch cow, and cities revoke their friendship ties. Gaziantep cut their relation with Nijmegen. Erdogan called for the cancellation of friendship with Rotterdam. The problem is, Rotterdam has no ties with any Turkish city…

Erdogan himself is calling for a holy war.

It’s a bit buffoonish. Nevertheless, the Turks really are furious. There are 400,000 of them living in our country. The Dutch army has 40,000 men and little equipment. The police have already had difficulty controlling one Turkish riot, let alone five or more in different cities.

To sum it up: Article 1 wasn’t elected. That was a racist party, our version of Black Lives Matter More. VNL, two turncoats who left the PVV with their seats, weren’t elected. Thierry Baudet was; he leads the Forum for Democracy (FvD), with two seats. I’m not too sure about Mr. Baudet. He looks to me like the younger version of Rutte: about as trustworthy, and without any social conscience whatsoever. He is a diehard libertarian.

All in all, not really a bad election. Overall, left-wing parties lost out massively, and conservatives move slowly forward. The EU can applaud Rutte, but the problems are still there and will get much worse. Greece is still teetering. ISIS is probably ready now to strike in anywhere Europe when they want to. For the EU and the elites in Holland, this was a Pyrrhic victory.

32 thoughts on “A Pyrrhic Victory”