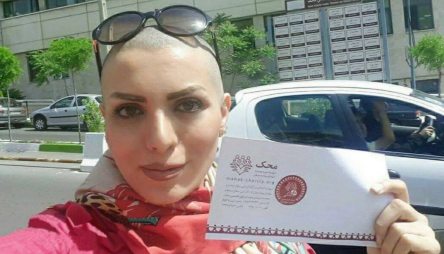 Below is another article from Emma.de, the website of the German feminist Alice Schwarzer. This one was translated by JLH, who sends the following introductory note:

This is somewhat old, but an interesting reflection on the continuing resistance to sharia on Iran. It is striking that Alice Schwarzer — the grand poobah of German feminism — visited Tehran on May 1, 1979, less than three months after the final defeat of the remaining royal forces and the installation of the Khomeini regime.

Schwarzer summarizes her impressions of the visit by quoting from the Iranian Anouchkla Hodes in the then-current issue of her feminist magazine, EMMA: “Repression by the Shah came for us Iranians from without, and was so obvious and violent, that one could defend oneself against it. But religious repression comes from the people themselves and is blindly approved by the majority of Iranians, because they have known only this form of resistance against the [Shah’s] tyranny of terror.”

And even after President Obama ignored the peaceful but voluble protest of Iranian elections in 2009 — sometimes called the “Green Revolution” — resistance is not dead.

I searched for more recent articles on the subject, but found none. That may just be my inadequate search methods.

Tehran: Freed From the Hijab

There is a new trend in Tehran. Women are shaving their heads so they won’t have to cover up anymore. Or some are just going out in public “as a man.” Since the [international economic] sanctions were lifted, many are celebrating the so-called “opening up” of the theocratic state. That applies to the economy — but what about women?

Step 1: She had her hair shaved off and donated to help children with cancer. Step 2: She stepped out into the street, bald — and without a headscarf. Step 3: She made it public via Facebook. She is an Iranian woman, and all of this is playing out in Tehran. She writes: “When I stepped out onto the street, I told myself — ‘No hair — no cultural police.’ Now the ones who always tell me to cover my hair no longer have a reason to arrest me for anti-Islamic behavior.”

Iran, which is “opening up” to the acclaim of the international media, is indeed opening up economically, but not for women. Just the opposite.

Tehran’s police chief has just announced that the uniformed Eshad[1] patrols — who arrest all women whom they believe are “anti-Islamically” dressed — are staffed by 7,000 police officers in civilian clothes. All on the hunt for women.

The Iranian Jean Seberg posted her photo at the Facebook group My Stealthy Freedom, whose founder Mashi Alinejad now lives in New York. For years My Stealthy Freedom has been publishing thousands of photos of completely fearless Iranian women who are de-veiling as protest — as the “law of the headscarf” is being fought out in this land.

Many an Iranian woman of Tehran has not only had her hair cut short. Like Narges, a 19-year-old athlete from Tehran. For some time, she has been going out in public as a man. “A new trend among women in Tehran,” she writes in an e-mail to EMMA. There are also photos on My Stealthy Freedom.

“Men have so many more liberties. Above all, they are not forced to wear a veil,” says Narges. “But I have found a way to disguise everything feminine on my body.” Narges wears capacious pants and shirts. She bound her breasts firmly to her body. She kept that up, until — as she recalls, they had “lost their shape” and the bindings were no longer necessary. “And now it has become more difficult for me to dress as a girl.”

And Still, They Would Just Like to be Women — But Free

At first it even seemed to be a relief. Narges felt safe as a boy on the street. But now the 19-year-old regrets this compulsion. “I would really like to be a girl. I never intended to completely change my gender identity. I was forced into taking leave of my femininity. Just to be able to be free.”

Like so many women in Iran, Narges has a dream. “I would like to live in a country where I can enjoy being a woman — and not have to act as if I were someone else.”

13 thoughts on “Tehran: Freed From the Hijab”