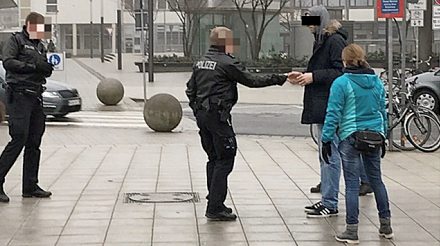 The following brief article from Politikstube translated by Nash Montana provides a heartwarming change of pace from the daily horror of migration news coming out of Germany.

This story underlines the well-known disparity in IQ between native Europeans and their new culture-enriching neighbors. Not only was the young girl courageous, but she was also smarter than the would-be rapist — he was actually stupid enough to believe her and come back the next day:

A 13-year-old girl has trapped a groper. The man had harassed her at the main train station, but the student figured out how to get away from him. According to the BILD report, the man had grabbed her by the hand an pulled her into a dark corner: “He covered my mouth and in English he told me that I had to be quiet.” Then he tried to kiss and to grope her in the dark corner. The student, however, promised him that she would be back in the same place on the next day, at 3:00pm. The next day the man indeed appeared at the appointed location, which led to his arrest by the police. The groper is from Algeria.

The above paragraph is a summary of a report in Bild. According to the translator: “The first picture in the BILD article shows two cops and a civil cop arresting the groper. He’s quite tall. The second picture shows Lisa, who entrapped the Algerian sex offender. She’s very brave and resourceful.”

Notice that the Politikstube report (and hence the Bild story) violated the Press Codex by revealing the perp’s ethnicity. Is the PC wall finally beginning to crumble in Germany?