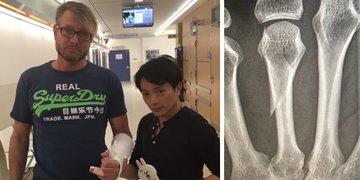 Early yesterday morning in Vienna a group of “youths” took exception to a symphony violinist’s request that they not smoke in the subway. One of them responded by kicking him in the hand, breaking one of his fingers. It will be several weeks before he learns whether he will ever be able to play his instrument again.

Many thanks to Ava Lon for translating this article from Österreich Online:

Because of smoking ban

A symphony musician (48) must now tremble for his future as a professional musician.

On the way home after a tour, Michael Buchmann (strings) was in Vienna on Sunday night: “In the afternoon we played in Dortmund. We were brought to the concert hall. It was already midnight and I wanted to take the subway home.”

The symphony musician stood on the platform of the U4 station Karlsplatz in the direction of Hütteldorf when he smelled the typical cigarette smoke. “I saw three teenagers and pointed out that smoking in the subway area is not allowed.” Because the youths — probably Arabs or Afghans —claimed not to understand him, Buchmann repeated his request in English. Then the opponent who was smoking spat in his face.

Angry, the musician confronted the spitter, who then launched a karate kick against his hand. “At first I did not feel that something had happened. Several witnesses intervened; we rode together on the subway for two stations until the three got off at Pilgramgasse.” Only then did he notice that his left ring finger “stood out at an odd angle”. His son (a friend of La Hong) and the fashion designer took him to the ER. There they diagnosed a complex torsion fracture; the finger was realigned and will be in a cast for at least four weeks.

It is not yet possible to assess whether any consequential damage remains. On Sunday, the symphonist pressed charges against the smoker for serious bodily harm. After that the police are expected to take over the case.