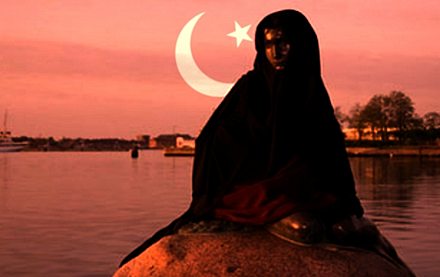 More and more “Danish” women are choosing to avoid… ahem… unpleasantness by having their virginity restored before marriage. Thanks to the ingenuity of entrepreneurs, they do not have to resort to the ordeal of hymenoplasty, but can acquire an artificial hymen instead.

Many thanks to Tania G. for translating this report from TV2 in Denmark:

Danes purchase hundreds of fake hymens on the internet

In Muslim culture it is expected that that a woman’s virginity is intact before marriage. This causes some young Muslim women to buy fake hymens, so that they are sure that they bleed the first time they have sex with their husbands.

Over 500 so-called fake virginities were sold to Danish customers in 2016.

In Muslim culture it is expected that a bride’s virginity will be intact before their nuptials. That prompts some young Muslim women to purchase fake virginities so that they are sure that they bleed the first time they have sex with their husband.

“There is still a very strong expectation that Muslim girls will be virgins on their wedding, night which can make some girls very worried and very stressed. They can be so desperate that they may consider suicide,” says Susanne Fabricius, the project manager in the organization “Etnisk Ung” (Ethic Youth) whose job is to guide young people regarding honor-related conflicts.

Radio24syv has spoken with the companies “Hymenshop” and “Virginia Care”, both of which sell their products in Denmark. Together the two companies have sold 2,670 fake virginities to Danish customers over the past five years.

A false virgin “hymen” consists of a small gel membrane containing either bovine blood or a dye that is similar to blood. The woman inserts the fake “virginity” into the vagina half an hour before she has intercourse so that the membrane ruptures upon penetration. This way the culturally expected blood-on-the-sheet is met.

In fact, few women bleed the first time they have sex. So says the chief physician and specialist in gynecology and obstetrics at Hvidovre Hospital, Charlotte Wilken-Jensen:

“It is not at all a given that you bleed the first time you have intercourse. Perhaps one or two women out of ten might bleed. So, to say that it is a proof that you are a virgin when you bleed at first intercourse has no relevance,” explains Charlotte Wilken-Jensen to Radio24syv.

On Etnisk Ung’s website young people can write to an anonymous letter box with questions, and, according to the organization’s project manager Susanne Fabricius, many of the issues concern the hymen. On their website one can read anonymous letters on the subject. A young woman wrote:

“I’ve had a boyfriend for a year. He has from the very first said that he wanted a girlfriend who was a virgin. I’m a virgin, but I used tampons when I was younger. We didn’t talk about sex in the beginning or our relationship but now he has started talking about it. I am really scared of losing him because of a hymen!

The demand for fake hymens has increased

According to the German company “Virginia Care”, which Radio24syv have spoken to, the demand for fake hymens has risen over the past year. Not just in Denmark, but throughout the world, says Daniela Lindemann, who works for the company:

“We believe that many women are interested in our product, because it is cheaper and easier than, for example, surgery to restore the hymen. Our product is, however, risk-free,” says Daniela Lindemann to Radio24syv.

At the Social Agency’s Dialogue Corps they are also familiar with the issue and the myths of virginity. Each month Dialog Corps Coordinator Sigrid Bacher Frederiksen travels around the country with 25 young people in an attempt to encourage changes in attitudes with respect to, among other issues, gender- and marriage-related issues. And here the expectations of virginity at marriage are also a subject for discussion:

“Some girls are of the opinion that they are only good girls if they remain a virgin until marriage. They are very afraid to dishonor their family and lose their lovers if they do not bleed on their wedding night,” says Sigrid Bacher Frederiksen, who, besides being the coordinator of Dialogue Corps, is also the clerk at the Agency for International Recruitment and Integration.

A fake virginity costs around 400-600 Danish kroner and is sent discreetly in the mail, hidden, for example, in a small jewelry box, so that the family does not discover what the package contains.

9 thoughts on “A Humane Alternative to Hymenoplasty for “Danish” Brides”