On October 18 Diana West, the author of American Betrayal, was scheduled to give a lecture about Political Correctness in Chapel Hill, North Carolina. However, the local Progressive/Muslim alliance got wind of what she was up to, and tried to shut her down. 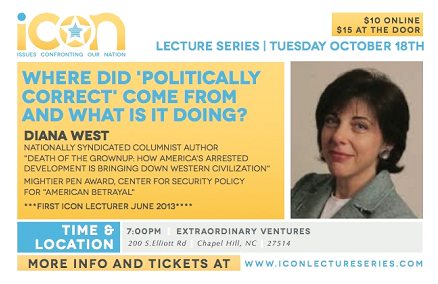 The event was sponsored by a group called Issues Confronting Our Nation (ICON), and was billed as part of the ICON Lecture Series: “Where Did “Politically Correct” Come from and What Is It Doing?” (Cultural Marxism in America). The title was enough to send the lefties into paroxysms of high dudgeon, and they exerted pressure on the venue — an outfit called Extraordinary Ventures — to cancel the lecture.

The strategy was to demonize and thus delegitimize me as a point of pressure to bear on the management of the venue, Extraordinary Ventures, to convince them to cancel my appearance and sever its standing business relationship with the ICON lecture series forevermore. However outrageous, such thuggish tactics have been successful before, as cancellations of many other events attest (up to and including Milo Yiannopoulos’s appearance this week at the University of Maryland, canceled over a hastily imposed security fee).

In this case the venue did not cancel, and the event went ahead as scheduled. Ms. West’s talk may be seen in its entirety in the video below. In addition to the fracas over her lecture, she talks about Marx, Lenin, the Fabians, the Frankfurt School, SDS, and the communist infiltration of America in the 1930s and ’40s. 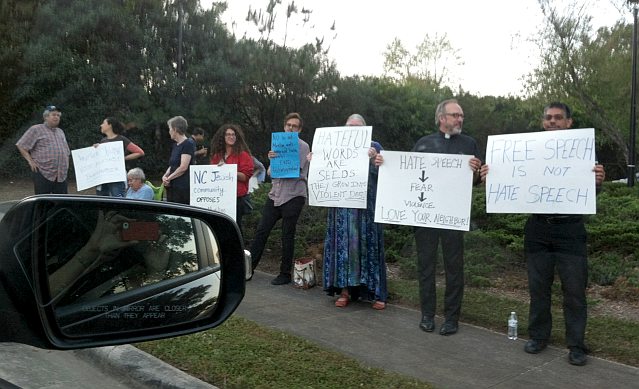 The attempt to shut her down was apposite to her topic, and she spoke at length about the Left’s totalitarian aspirations as manifested in their efforts to silence any speech that might contradict the Narrative and offend the college students and bien-pensants who dominate public discourse in these early years of the 21st century.

Diana West didn’t use the term “snowflake” in her discussion, but I will. “Snowflake” is a relatively recent coinage designating those sensitive souls of a progressive mindset who absolutely cannot bear to hear opinions that disagree with their own. They consider it their right not to have such opinions impinge upon them, and have created “safe spaces” at most universities and colleges where free speech is restricted in order to protect the tender sensibilities of the snowflakes. The Gutmenschen have made it clear that they intend to expand these safe spaces to include the entire country, so that no one in that blissful dominion will ever be subjected to “hate speech”.

The subliminal message in these authoritarian exertions is that speech itself — the simple utterance of words — may be dangerous. Certain spoken or written expressions are so powerful and irresistable that they may prompt an impressionable listener to act in ways that are detrimental to the public good. Hence such speech must be suppressed.

This is where the thinking of Islam and the Multicultural Left converge. The content is different — Islam commands the death of those who refuse to submit to Allah, while the Left seeks to shun those who fail to utter the Progressive shibboleths — but the process is the same. Listeners are assumed to be automata without any agency. When they hear certain expressions, they will act in certain ways. They have no choice. They are not able to weigh information, analyze it, draw conclusions, and act accordingly. Any utterances that do not accord with Right Thinking must be kept from them, otherwise they might harm themselves or the collective.

Such is the mindset behind the attempt to shut down dissent. And this is why the Left and Islam have discovered so much common ground.

Ms. West was premature in her assertions about ICON’s success against the forces of repression, because the organization that rented the venue for her talk found it expedient to apologize. As reported by The Herald Sun:

“This week Extraordinary Ventures finds itself unfortunately caught in the middle of a political discussion. To be clear, [EV] does not in any way, shape or form condone racism or hate messages,” Extraordinary Ventures managing director Paige Morrow said. “At the same time, as a business it cannot unilaterally cancel a contract without significant risk and consequences.

“The people of Extraordinary Ventures do apologize and promise to do a better job in the future vetting potential customers.”

This was a victory for the forces of PC: the venue conceded their obligation to vet any applicants who want to use their space, and to exclude those whose speech would be deemed hateful by the guardians of the Narrative.

One step forward, two steps back.

18 thoughts on “The Melting Snowflakes of Chapel Hill”