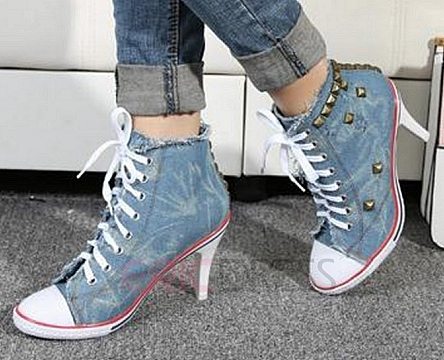 Nash Montana, who translated the following article from Freie Zeiten, is at pains to emphasize that THIS IS NOT A JOKE:

German Federal police recommend: Women should wear sneakers so they can run away better from asylum seekers

GERMANY. In last year alone more than two million immigrants from the Third World came to Germany, almost all of them males. Since then the number of sexual assaults has exploded. Now the federal police distribute tips to German women on how they can protect themselves from being raped.

“When women feel anxiety when they walk towards a group of men, or when they perceive a situation that emanates possible danger, they should trust their intuition in any case, and they should avoid getting into those kinds of situations any deeper,” says Markus Koths, the press spokesman for the Federal Police (BKA).

One might even “have to attempt a detour if need be.” Moreover, one should always look “to see if there might be police nearby to whom one could talk.”

But should one still get attacked by asylum seekers despite all these precautionary measures, it is of utmost importance to defend oneself.

“Hereby one has to go forward as bravely and determinedly as possible. Also, screaming loudly is a good method to alert people passing,” opines the BKA spokesperson.

Moreover, it’s important to concretely address someone in the immediate vicinity in such a way that the person instantly knows that it is exactly he who is being spoken to. This way the pressure might be stronger to help. One example would be: “You over there with the glasses and the blue raincoat, please call the police!”

Should there be no option to call the police beforehand, then the affected person should call emergency services immediately after the rape, and also notify the police. Additionally, women can log into the national website hilfetelefon.de after a sexual assault in order to receive advice.

Additional tips for women from the BKA

45 thoughts on “These Boots are Made for Running”