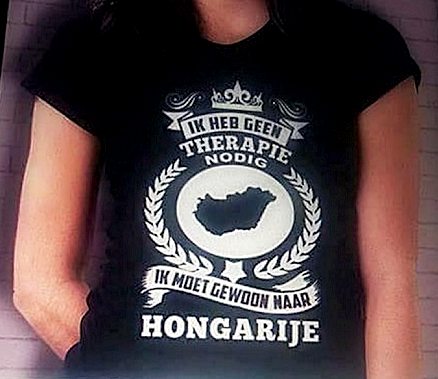 ‘I don’t need therapy — I’d rather move to Hungary’

According to a Hungarian news report, the Dutch government is dealing with the migration crisis by providing young women with what they call “therapy” to prepare them for the (non-negligible) possibility that they may be raped by an immigrant. Advance therapy for rape — isn’t that swell? Close your eyes and think of Holland, girls!

The article below discusses the whimsical T-shirt pictured above, among other aspects of the revolt against multicult in the Netherlands. It’s a reminder that Hungary is leading the resistance against Islamization and mass immigration in Europe. The Hungarian referendum coming up on Sunday (on whether to accept mandatory migrant quotas from the EU) is as significant for the future of Europe as last May’s Brexit vote in the UK.

Hungary deserves the support of immigration-critics throughout the West. It comes highly recommended as a tourist destination, as do the other countries of the Visegrad Group. For those who can’t make the trip, buying Hungarian products is a suitable alternative. Which, needless to say, makes me think of wine.

I consulted with the future Baron, who is a wine expert, and he says that Tokaji, a.k.a. Tokay, is the most well-known Hungarian wine. It’s a sweet white dessert wine, like a sauterne or an ice wine. But he says there are also dry reds, including Egri Bikavér (“bull’s blood from Eger”). From the wiki:

According to legend, the name originates from the invasion of Suleiman the Magnificent around 1552.

“To motivate and support the small group of soldiers during the Siege of Eger castle they were served delicious food and a lot of red wine. Among the Turkish soldiers it was rumored that bull’s blood was mixed into the red wine, as otherwise the strength and firm resistance of the town and castle of Eger could not be explained. Finally the enemy gave up.”

It has been suggested that the term Bikavér was coined by poet János Garay in 1846.

For the non-bibulous among our readers, there are other Hungarian products that may be worth a look. I noticed while browsing the web that most of Hungary’s exports are of technical products — it’s a very high-tech economy. But pork products were on the list. So… wine, pork, and maybe a Magyar agár puppy. How much more Islamophobic can you get?

And now for the Magyar-oriented Dutch girls. Many thanks to CrossWare for translating this article from the Hungarian news portal PestiSrácok.hu:

This is why Dutch girls want to move to Hungary

The Hungarian government’s immigration politics are more popular than the EU’s present policies. In the Netherlands young Dutch girls advertise on T-shirts that they would rather move to Hungary than undergo the preparation therapy organized by the Dutch government for migrant-violence (rape). [Yes you heard it right, they give them preparation for the certain rape and violence rather than protecting them from it — translator]

One of the latest programs in the Netherlands to prepare young girls for unavoidable migrant violence is to provide them preparatory therapy against rape. As a result some girls have begun to wear a T-shirt with the text: “I don’t need therapy — I’d rather move to Hungary” (Ik heb geen therapie nodig — ik moet gewoon naar Hungarije).

The reaction of the young girls is not unique, and this shows in the popularity of the right-wing Party for Freedom. They want to ban and deport Muslim migrants, leave the EU — as urged in the election program of Geert Wilders, the leader of the right-wing Party for Freedom (PVV). The party leader — who was charged with hate crimes in the past but acquitted — wants to de-Islamize the Netherland and ban the Koran, mosques, Muslim schools and organizations, and close the migrant centers. In his one-page manifesto he also called for a ban on the burqa because it is an Islamic symbol. Based on the latest polls, his party the PVV is the most popular political power in the Netherlands.

They Put the Migrants into Prisons Instead of Apartments

The Netherlands is one of the most popular destination for migrants in Europe. In the last couple of years the Dutch government tightened its migration policies, but it seems like it is not enough. While in 2015 they provided apartments and language courses for migrants, in 2016 they found a solution for what to do with unused prison cells: in the past they had rented them to Belgium and Norway, but now they are using them as migrant accommodations. Of course they rebuilt the prisons, but the thick cell doors and prison grills on the windows are a reminder of the original functions. Based on an Associated Press report, the migrants do not mind the location; they only complain about the food.

The Police Jump if Somebody Posts Something in Social Media

The Dutch government is very sensitive to negative opinions about the migration. A couple of months ago the police knocked at the door of young man who posted something on Twitter. The interesting part was that he had not said anything negative, just asked a simple question about the migration. This is when it came to light that the Dutch Police have a special unit that watches social media, and whoever posts “interesting” content will get a visit from them personally.

Migration and Safety are the Priorities

As chair of the presidency of the EU [Note: The Netherlands rotated off the presidency in July, and Slovakia rotated on], the Netherlands, has the goal of bringing EU politics closer to its citizens and to contributing to growth. The primary focus for the Dutch president is migration and international safety, so they suggest a shared border control and a fair distribution of the burden among the member states. They want to create an effective European border control, and they wish to remedy the root of the migration crisis with a more committed and more proactive politics [I actually got nauseous while I translating this propaganda — Translator].

The EU — in Theory — Has an Agreement to Protect Woman

The agreement wishes to give an extreme boost to fight violence against women and prevent domestic violence. The signing countries must take every conceivable measure to prevent violence, protect possible victims and punish the perpetrators. [I am not sure telling a woman to make peace with the fact that she will be raped for sure counts as prevention. — Translator]

However, Hungary was the first on a T-shirt as a target country. In the meantime new versions have been released. Based on those, the Dutch would rather go anywhere outside of their country, including Bulgaria, Venezuela, Egypt or Albania — they would rather move than participate in their government’s re-education training.

37 thoughts on “Hungary the Model”