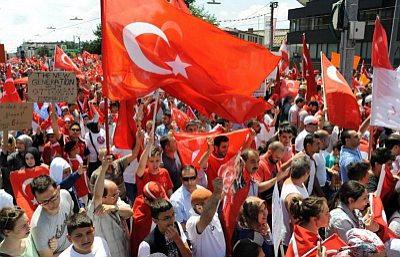 One might easily mistake the above photo for a scene from Istanbul or Ankara. But it was taken at a pro-Turkish demonstration in Vienna in 2013.

Turks stage these demos every week now in downtown Vienna, providing an occasion for near-warfare between Turkish-Austrians and Kurdish-Austrians. Last weekend the situation deteriorated even further than usual.

Turks in Vienna — Allahu Akhbar — “Like in a war”

More and more often there are conflicts that resemble civil war between leftist Kurdish PKK supporters and Turkish fascists, the Grey Wolves, on Austrian as well as on German ground. For quite a while now Kurds have been demonstrating every Saturday on the Stephansplatz to raise awareness of Turkish politics. But as soon as the demonstration begins, the Vienna city center becomes a danger zone. Tourists, residents, and business people are running the gauntlet. The people are in fear. Last weekend the situation escalated. Sonja, Prousek, the owner of the bakery Aida situated next to the Cathedral, was horrified: “It was like in the war.” The Stephansplatz became a bubbling cauldron. Hundreds of people fled in panic into surrounding areas, sought protection in hotels, stores and bars.

The Café Aida saw the most damage. Sonja Prousek told Zeitung Österreich: “Old people cried, children lost their parents. Dishes, drinks and food landed on the floor. We had to close up because customers and employees fled all the way to the other franchise down on Bognergasse.”

The Vienna police were present in full gear for security, but admit that these demonstrations, attended by 300 to 400 people, are increasingly becoming a serious problem. But also that there is the freedom to demonstrate.

Already on Friday evening 15 Kurds tried to invade the ORF-center at Vienna’s Küniglberg to force the channel to broadcast a message about Abdullah Öcalan, the PKK leader who is imprisoned in Turkey. Some of them made it all the way to the reception area. But that’s where the terror ended. The SEK WEGA (Special commando department Vienna) and trained dogs ended the chaos and escorted the Turkish mob out the exit. Once again, no one was arrested. There was merely one report for “disturbance of peace”.

By now proxy wars on European ground, not just among these groups, are in full bloom thanks to unconscionable and brainless immigration politics. The escalation was programmed. The colorful future will become a nightmare.

19 thoughts on “Proxy Wars Between Turks and Kurds in Vienna”