Our Israeli correspondent MC sends this report from his home in Sderot. The town was the target once again of Palestinian rockets, one of which landed too close for comfort earlier this afternoon. 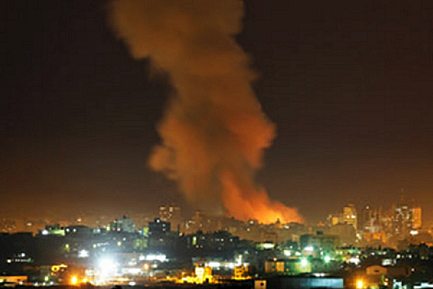 The Boyz are Playing Rough and Tough
by MC

An eventful day here on the Gaza border….

Stalin is holding a conference:

Molotov: “Why are we killing the cyclists?”

Alexis (originally from Ukraine) was telling the joke at the office. As he finished the Seva Adom alarm went off and there was a general rush to the shelter.

Being crippled, I never get there in time anyway, so I went to get a cup of coffee instead. Only to get told off by the cleaning lady, another cynical Sderotian. I explained that I too lived here, and she smiled knowingly…

No BANG — Not unusual. Phoned home, nothing heard there either.

About thirty minutes later I leave the office to walk home. One of the roads near our home is blocked off by police cars and an ambulance.

At home I get on the net to see what is reported. One comment says it was a Grad. If so, it was unusual; they normally go over our heads.

Reports also say that the bomb disposal squad are in attendance. I expect the missile misfired; maybe the primer went off but the explosive failed to ignite — nasty (this is called a ‘hangfire’ and it is the most dangerous type of UXB).

The thing had landed between two houses — no casualties. It was whilst I was walking past that the first Israeli attack went in, planes and a tank, so the reports say. They took out a water tower. That was about 2:50 pm this afternoon.

It is now 11 pm, and for the last 45 minutes there has been a continual bombardment. There are at least two Israeli tanks shooting, and we have heard a large-caliber machine gun from time to time, either a .50 cal or a 20mm cannon (I am not close enough, but the rate of fire is more reminiscent of a 20mm).

As yet I do not know what is going on. The news channels are silent, just mentioning a second attack by the air force, but it is just like Protective Edge at the moment. But hopefully it is all over now.

This is a definite escalation, and something has made our boys play much rougher than usual.

<bitter thoughts on>The Iron Domes are still up North, ready to defend the big cities from the virtual rockets of Hezbollah, but today we were lucky, no physical casualties. Sderotian lives are obviously no longer worth the $40,000 for each replacement missile </unbecoming bitter thoughts>

PS 11:15 and another shell just went over. Looks like we are in for a night of it.

17 thoughts on “The Boyz are Playing Rough and Tough”