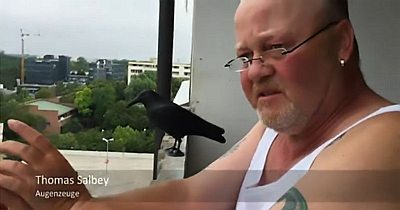 Last night we posted a video made by the woman who brought a legal complaint against the “balcony guy”, the Bavarian man who hurled insults from his apartment balcony at Ali David Sonboly during the latter’s shooting rampage in Munich on July 22 (see the original video of the exchange).

The following article was published at FOCUS.de not long after the massacre. It includes quotes from an expert who believes, contrary to the complainant, that the balcony guy used exactly the right tactic, confounding and confusing the shooter with his shouted insults and thereby delaying him.

Egri Nök, who did the translation, includes this note:

This article appeared shortly after the shooting and is full of errors when referring to the dialogue, possibly because the psychologist was given a faulty transcript.

The result was to make the steam shovel operator look “meaner” (more xenophobic) than he actually was.

A bewildering video of the perpetrator surfaced by the evening of the rampage: it appears to have been recorded by neighbors in an opposite house. It shows the perpetrator on a parking deck. He holds a pistol, with which he has already shot several people, in his hand.

One can hear a conversation between two men and the spree killer. “You a*****e, you wanker,” the neighbors yell at the armed perpetrator. The men also shout “s*** Kanaken [Turk]”.

It seems highly bewildering that the men should have a go like that at the armed perpetrator. But according to experts, it could have been exactly the right tactics — even if probably subconsciously.

“A spree killer must be confounded”

“If you want to stop or at least thwart a spree killer, you need to confound him,” the amok expert and violence de-escalation trainer Heinz Kraft explains. It is as good as impossible to make a spree killer give up. “This is a completely different case from, for example, a hostage situation. Someone who takes a hostage has a certain aim — and the threat is his means to gain that aim. That is why one can negotiate with him,” Kraft explains in the discussion with FOCUS Online.

With a spree killer, however, this is pointless: “His aim and his means are one and the same: to kill many people. As soon as he fired, he crossed the point of no return. That is why normally you cannot reach him via communication that is aimed at negotiating with or swaying him,” according to the expert.

A few seconds of distraction can save lives

Kraft goes on to explain: “But if you do something that the perpetrator absolutely does not expect, it surprises him — he needs to think and is distracted from his actual scheme for a few seconds. Even if it is just a few seconds, this time can be important: potential victims can seize it to get themselves to safety.”

This was the case with the spree killer of Munich. The 18-year-old Iranian-German reacted to the provocations. He objects, and explains himself: “Because people of you I was bullied. For seven years,” he shouts. Answering the xenophobic insults, he answers: “I am German.” He says he grew up here and was in treatment. The two neighbors even ask back: “What makes you German?” and “So what? What is this s*** you are doing there?” They film what is going on. The spree killer demands that they stop it. Then he fires shots at the building. Only then does he move on.

The video shows him walking up and down the roof. Meanwhile, the police have said that the youth was depressive and at least temporarily in treatment for it.

One of the two men was a steam shovel operator: “I was not afraid”

One of the two swearing men was the 57-year-old steam shovel operator Thomas S. He told Bild newspaper: “I was drinking my quitting-time beer when I heard the first shots.” The parking deck is right under his apartment. He threw a beer bottle at him. Then, he insulted him in broad Bavarian dialect. He shouted to the police that the perpetrator was on the parking deck. When the perpetrator shot at him, he ducked. “I was not afraid. I did not know if it was blank or real ammunition.” The other man on the video supposedly is a neighbor, who recorded the video.

Security forces use distraction maneuvers, too

“Even if this form of distraction was not a conscious decision — it worked temporarily. The perpetrator was not expecting this. He probably expected people to plead with him to stop. When people did something completely different, he reacted. A thought process started, and it took quite a while, until he realized that the men were delaying him. Both probably were at a safe distance and from there could attempt to influence him,” says Kraft.

He refers to security forces that in rampage situations also bet on distraction — for example by detonating so-called “irritation devices”. What’s more, there is a scientific term for this bewildering behavior: paradox intervention. “It means acting in a way that a neutral observer would find absurd and completely inappropriate.”

16 thoughts on “Expert Opinion: The “Balcony Guy” Did Exactly the Right Thing”