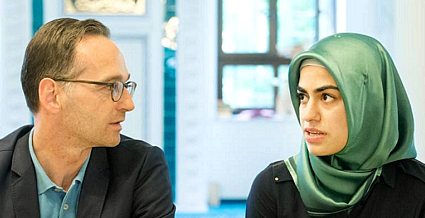 The young Turkish-German lawyer Betül Ulusoy caused a ruckus last year when she demanded to be allowed to serve her legal internship wearing the hijab. Now she’s back in the news after making jingoistic remarks on Facebook — in Turkish, of course — about President Erdogan’s massive purge of the military and the judiciary in Turkey. However, since she’s a culture-enricher, she will face no discipline from judicial authorities.

Many thanks to Egri Nök for translating this article from the Berliner Zeitung:

The controversial Facebook posts by a legal intern about the failed coup in Turkey will have no disciplinary consequences for the 26-year-old. The case has been appropriately examined by the administration of justice, said Annette Gabriel, the spokeswoman for the chamber court responsible for training, on Wednesday. Disciplinary action would not taken because it would be disproportionate.

The administration of justice considers the remarks by Betül Ulusoy covered by freedom of expression. There is no violation of the state law for civil servants, Gabriel said. In Germany, to be dismissed from the civil service, there has to be a criminal case be opened against one, or a final conviction. Both were not the case.

According to media reports, the young woman with Turkish roots had not only openly welcomed the failure of the coup in Turkey on Facebook, but also Recep Tayyip Erdogan’s “purge” of the judiciary and the military. She had written in Turkish that everything had a good side; “at least you can clean some dirt. Everyone gets what they deserve. We won’t permit this. With the permission of God [sic]. “

The aspiring lawyer and active blogger spoke of a translation error. On the short message service Twitter, she posted in German: “condemn military coup clearly, and not lose democracy and rule of law from our sight”. On Facebook she also struck a more moderate tone.

For the Berlin judiciary, by doing so Ulusoy has distanced herself from her previous statements. Also, she had spoken about an operation in Turkey and not in Germany. In addition, she had assured that she was not a member of the Turkish ruling party AKP. Rather, she belongs to the Young Union (youth organisation of the Christian Democrats), who want to exclude her, however.

Last year Ulusoy had made herself a nationwide talking point as the “headscarf lawyer”, when she wanted to complete the training stationed in the Neukölln district (Berlin) with a scarf. She was denied that right, with reference to the Berlin Neutrality Act. Alternatively, the district offered her a place where she would take “no sovereign operational functions”. She did not accept this position, though. Politicians then accused her of having staged a “campaign for the headscarf”. (EPD)

3 thoughts on ““Headscarf Lawyer” Goes Gung-Ho for Erdogan, But Faces No Discipline”