The German Bundestag voted today to recognize the Ottoman massacre of the Armenians in 1915 as a genocide.

When Recep Tayyip Erdogan threatens Germany, normally Germany cringes and backs down. So what happened this time? What’s changed? Were the blatant threats issued recently by Mr. Erdogan over the “refugee” deal a bridge too far?

It used to be like this, but not any more: 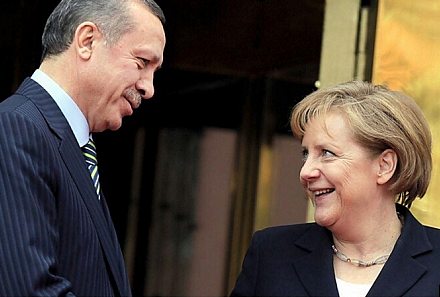 Below are excerpts from an article in The Telegraph:

Germany’s parliament on Thursday voted to recognise the 1915 massacre of 1.5m Armenians by Ottoman forces as genocide, to the undisguised fury of the Turkish government, which swiftly recalled its ambassador.

The landmark decision came despite fears it could jeopardise the EU’s fragile migrant deal with Turkey, which has already threatened to tear up the agreement and send hundreds of thousands of asylum-seekers to Europe.

A Turkish government spokesman described the vote by German MPs as a “historic mistake” and dismissed the resolution as “null and void”.

Recept Tayyip Erdogan, the Turkish president, warned in the run-up to the vote that it could “damage” relations, and Binali Yildirim, the prime minister, described it as a “real test of friendship” between the two countries.

But German MPs defied Turkish threats, voting to recognise the genocide by what Norbert Lammert, the speaker of the Bundestag, described as a “remarkable majority”.

Only one MP voted against the resolution and only one of those present in the house abstained.

Angela Merkel chose to stay away to avoid provoking further tension with Turkey, pleading other engagements.

But in a marked change of stance that appeared to be a reaction to Turkish threats, she made clear her support for the resolution in the run-up to the debate, voting in favour in a straw poll at a meeting of her Christian Democrat party (CDU).

The Bundestag resolution admitted Germany’s historic role, as a military ally of the Ottoman Empire, in aiding the “organized expulsion and annihilation of the Armenians” and failing to stop “these crimes against humanity”.

Armenia welcomed the resolution. In a statement, Edward Nalbandian, the foreign minister, thanked Germany for its “valuable contribution not only to the international recognition and condemnation of the Armenian Genocide, but also to the universal fight for the prevention of genocides and crimes against humanity”.

There are concerns the German vote may put in doubt the EU’s controversial migrant deal with Turkey, which was personally negotiated by Mrs Merkel.

Mr Yildirim, the Turkish prime minister, has said the vote will not affect the migrant deal.

But Mr Erdogan has already threatened to tear it up in a row over visa-free travel to Europe for Turkish citizens.

Under the deal Turkey is to receive the visa waiver and ‚ €6bn (£4.6bn) of aid in exchange for stopping asylum-seekers entering Europe and accepting migrants deported from Greece.

But Mr Erdogan’s government has refused to reform anti-terror laws that are used to silence his political opponents, one of the EU’s 72 conditions for granting visa-free travel.