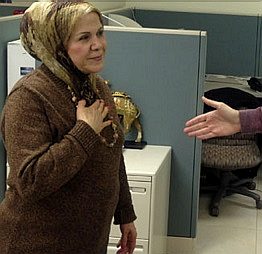 A woman refuses to shake hands with her (male) doctor. The doctor responds by refusing to treat her. The woman’s husband then sues the doctor for damages.

Such is the practice of medicine in Modern Multicultural Germany.

Many thanks to Nash Montana for translating this op-ed from Die Welt:

The doctor who didn’t want to treat the Muslima

A physician is standing in front of a judge because he refused to treat a Muslima after she refused to shake his hand. It’s incredible the kinds of cases judges nowadays have to deal with.

This could have happened anywhere in Germany. But this particular case comes out of a medical practice in Bergisch Gladbach, a small city near Cologne. There, a few months ago, a Muslim couple entered the practice of a doctor that the woman chose to treat her. Everything went normally: first the initial registration at the reception desk, then the waiting in the designated area, and then admittance into the treatment room.

It’s there that the doctor extended his hand to the future patient, to greet her. She rebuffed his gesture. After the doctor’s inquiry, she maintained that this was an Islamic requirement. Her husband now interjected himself (why was he in the room in the first place?), and a debate ensued.

During this debate the doctor indicated that the Quran does not forbid such a handshake. In the end, the exasperated physician refused to administer treatment, since for him the basis for mutual trust had been permanently damaged.

To be treated only in case of emergency

The husband, on the other hand, lawyered up. And the lawyer now asserts to the court that the refused treatment is in violation of the principle of equality, and must therefore be punished with a €2,000 fine. The judge did not agree, but could not move the husband of the patient to withdraw his lawsuit. Therefore the process will continue on July 8th.

One can only hope that the judge will persist with her clear position in favor of the physician, since the establishment of mutual trust between patient and treating physician in our hemisphere forms the foundation of a successful treatment. And apart from that, any doctor in Germany is free to refuse treatment in a where the basis of mutual trust is absent — except when there is an emergency. Which is not the case here.

It is unreasonable to demand of a German physician that he deal with such cases in his own practice. It is an even bigger imposition for a German lawyer accedes to such a request and is willing to hang this procedure around a doctor’s neck.

How many real court cases are being blocked due to such idiocy? Our judiciary has better things to do. And who will pay for the legal costs in the end?