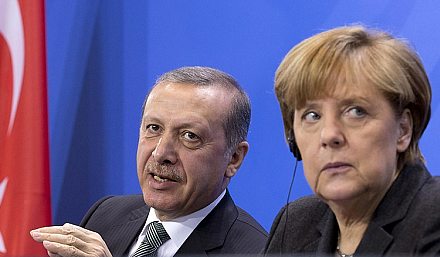 The following article from FOCUS Online examines the internal German political context surrounding Chancellor Angela Merkel’s decision to allow a television satirist to be investigated and possibly prosecuted for insulting Turkish President Recep Tayyip Erdogan. Many thanks to JLH for the translation:

Abolition of Paragraph 103, But Not Until 2018: The Trick Merkel Uses to Provide Erdogan an Exclusive Right

The Chancellor allowed investigation of [the television presenter Jan] Böhmermann and simultaneously announced the abolition of paragraph 103 of the penal code — but not until 2018. The reason for this postponement: otherwise, Böhmermann could not be punished. That is how Merkel allows Erdogan the exclusive right to a proprietary complaint of statutory offense in the Federal Republic of Germany.

Last Friday the federal chancellor was deservedly the object of strong criticism for her decision on how to handle the Böhmermann affair. It is noteworthy that she was visited with incandescent fury about her granting of permission to prosecute in accordance with paragraph 104a of the criminal code, not only by artists or TV functionaries or journalists, but also by her coalition partners, the SPD. Immediately after the chancellor [had spoken], Social-Democratic cabinet members Heiko Maas and Frank-Walter Steinmeier explained the reasons for their disapproval. With reference to the freedoms of opinion, press and art as the “greatest protected values in our constitution”, they expressed regret that they could do nothing, when the chancellor overruled them in a standoff.

This alleged heroic battle for our basic values was framed by commentaries from the usual red cheerleaders, such as the moralist whiz kid of the SPD, vice chair Ralf Stegner. He spoke of Angela Merkel’s “disgrace” and acknowledged his colleagues for deciding in favor of “reason” while the chancellor had decided “against it”.

What the SPD leadership describes as extraordinarily valiant is, in its effect, pitiful. If the SPD leadership had really been concerned about preserving one of the greatest treasures of our constitution, they would have had to take the confrontation with the chancellor all the way — and not simply swallowed her vote in the cabinet.

The fact that Steinmeier and Maas did not seek this battle indicates that there are more important things for the Social-Democrats than the most important legal protections of our constitution — namely, being able to point a finger of reproach at the chancellor.

So the question arises: How weak has the rich-in-tradition SPD become, if it seriously believes in its ability to celebrate a defeat in power politics in something so crucial?

Why does the abolition not take effect until 2018?

Far more consequential for the relationship to our basic values is the federal government’s announcement of its intention to abolish paragraph 103 of the criminal code. The question is, if the government now decides that the norm for lèse majesté does not suit the times, why is there a quick decision for a change in the law, which does not take effect for two years?

The reasons for this are not reassuring. It would have been logically consistent for the chancellor to announce on Friday that she would not approve the prosecutor’s investigation, because this relevant paragraph is to be removed in the near future. As we know, the chancellor did not do this, because it would have invalidated an investigation on these grounds. Paragraph 2 section 3 of the criminal code reads: “If the law that applies at the conclusion of the act is altered before the judicial decision is reached, then the mildest law must be applied.” In the particular case of Böhmermann, this means that eliminating Paragraph 103 before the judicial decision is reached leads to the judicial conclusion that the law, which no longer foresees this offense, is the lighter one. Therefore, Jan Böhmermann can no longer be convicted according to paragraph 103. No sentence, you might say, is really mild.

Against this background, the chancellor’s decision to eliminate the insulting of a head of state from the criminal code — to take effect only in 2018 — was clearly made in deference to Erdogan. Angela Merkel is thus affording the Turkish Prime Minister exclusive right to a criminal complaint in Germany — just so he can vent his temper.

The chancellor takes a knee

With this announcement, the Turkish head of state has gained indirect influence over the legislative power in the Federal Republic. If that is not the chancellor kowtowing, than what is it? At any rate, it is not a sovereign decision of the federal government.

Wolfgang Kubicki is head of the FDP (Free Democrats) in the legislature of Schleswig-Holstein and deputy federal chair of the FDP.