A woman named Dawn sent us the following disturbing information about a church she used to attend. She’s asked that her anonymity be preserved, so I’ve edited out anything that might indicate where she lives and which church is referred to.

This sort of “educational” material can only gain traction where there is widespread ignorance about the history and doctrines of Islam. Disinformation flourishes among well-meaning but ill-informed people. This is why websites such as Gates of Vienna, Vlad Tepes, Tundra Tabloids, The Religion of Peace, Politically Incorrect, Snaphanen, Jihad Watch, and Pamela Geller exist — to provide an education about Islam that is otherwise sorely lacking.

Here’s what Dawn had to say:

For the past four years, a mainline church I used to attend has been opening their hall to Muslims to gather for Friday prayers. Since most of the congregation are elderly, no one has complained. The imam who leads the Friday prayers has run a few Q&A sessions for people interested in Islam, also in the church hall, and has left booklets there explaining an airbrushed version of Islam.

This same imam has podcasts that used to be online (but seem to have disappeared) where he preaches to fellow Muslims in a very different tone, frequently calling his fellow non-Muslim citizens “racists” and “bigots.” When I finally spoke up and suggested that this is our opportunity to open their hearts and minds to the teachings of Christianity, I was met with expressions of shock and indignation.

Recently, I noticed this official announcement poster in our church hall: 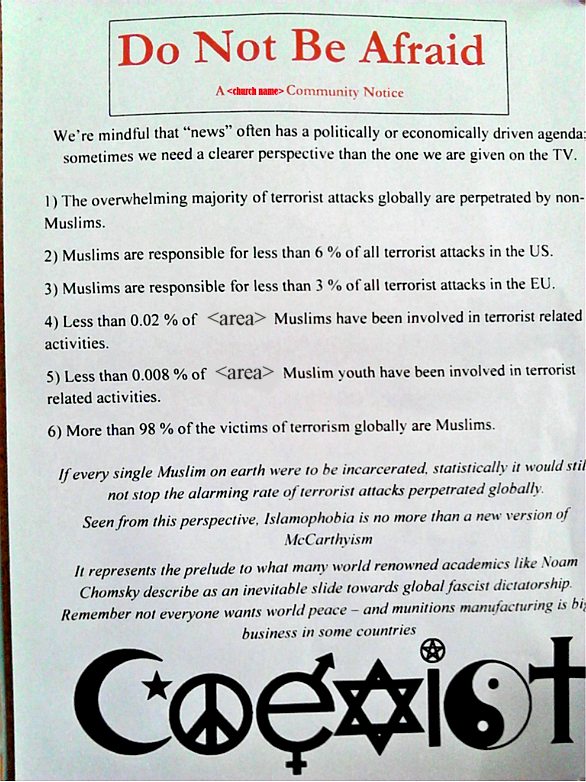 I looked online to try to find the source of their percentages and came across the Global Research website, which seems to be where it originated.

It would be interesting to know where these stats come from, as there are no links to data. I agree the Muslim victim statistic is high, but the other percentages are also highly doubtful. The definitions seem skewed as well.

Terrorism is usually defined as violence and intimidation with direct religious, political or ideological aims. This is different from someone who is insane, irrational, or under the influence of drugs or alcohol, and who mass-murders, no matter what ideology they may make references to while harming others. And, while a disturbing percentage of Muslims supports terrorism, especially amongst its youth, non-Muslims do not support mass-murderers like those of Columbine, Port Arthur, or Norway.

So it seems this site does not distinguish between murder through terrorism and murder through mental instability. It lumps them altogether, and also includes a curious 7% of US terror attacks having been perpetrated by Jews with “religious passion.” There is no reference or source.

The “contact” section has a list of names with titles like ‘professor’. Does anyone know anything about this organization, and anything about “Jewish terrorism” in the US?

I asked one of my contacts in D.C. about all this, and got a couple of tidbits of information:

As to Global Research, I would guess that they’re closely linked with the Kremlin along the lines of RT see their about page.

Also see the information on Michel Chossudovsky — he founded it. For greater detail there’s his wiki entry. I don’t think his daddy was a refusenik; sounds more like an operative.

Dawn did some further research, and sent this follow-up:

I’ve been reading about this guy and it seems he’s a paranoid conspiracy theorist. A journalist quoted on Wikipedia calls him “the nuttiest professor”. RationalWiki has a page of information about him and a list of his conspiracy theories:

“While many of Globalresearch’s articles discuss legitimate humanitarian or environmental concerns, its view of science, economics, and geopolitics is broadly conspiracist, with a strong anti-Western bent. It’s no surprise that the site has long been a crank magnet for moonbats of all stripes. If you disagree with mainstream sources on 9/11, or HAARP, or vaccines, or Gaddafi, or H1N1, or climate change, or anything published by mainstream “Western” media, then Globalresearch is guaranteed to have a page you can cite in support.”

If this is where our minister and his inner circle get their information, I’m so glad we left!

101 thoughts on “The Church of Universal COEXISTence”