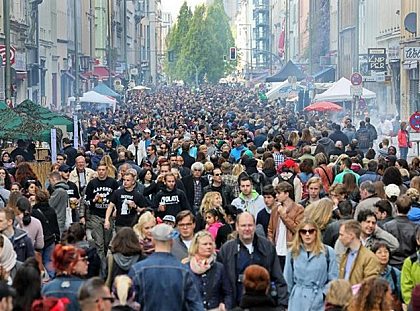 According to these European scholars, Europe is experiencing the negative, unintended consequences of unprecedented affluence brought on by post-WW2 secular materialism.

Many thanks to JLH for translating this article from FOCUS.de:

So much bad seems to be happening right now that many people feel the world is teetering on the brink. Three researchers in three different disciplines share this judgment and sum up the madness in plain language. The world seems out of joint. Europe is on the verge of breaking apart in the struggle over how to control the refugee crisis. International terrorism is assuming an increasingly ominous aspect. The Cold War seems to be rebounding. And climate change is advancing. According to the Magdeburg political scientist, Thomas Kliche, these threatening scenarios in Germany led to a “globalization shock” which is forcing us to second-guess our own opinions. The Mitteldeutsche Zeitung has reported on it.

According to Kliche — says the report — we are faced with an increasingly interconnected and mutually interdependent world, with new realities which would require us to put to the test what has been believed until now. This is painful and uncomfortable. The expert in political psychology tells the newspaper that, besides this “globalization shock”, society is suffering from a stupidity brought on by [an excess of] comfort.

“We Are All of us Dysfunctional”

When people prefer to go on vacation or jungle-camp instead of getting involved in the basics of the economy, politics and society, democracy is not in good shape, says Kliche. The Mitteldeutsche Zeitung quotes the professor: “Research is already talking about a late or intermediate phase of democracy.”

The researcher is not alone in this less than optimistic estimate In an interview with Zeit, the psychotherapist Joachim Maaz joins him to some extent in this attitude. Maaz, too, speaks of serious, undesirable social developments, and comes to the conclusion: “We are all dysfunctional.” The psychoanalyst’s criticism was: People participated in the wildness of growth, in the rush of consumerism; everything had to be better, higher, further.

The French economist Jacques Atali views Europe’s future with concern. In the economist’s opinion, tensions between European states and the dissolution of the Schengen agreement do not augur a rosy future for the continent. Atali even sees a war on the European horizon. “I am convinced, if we go on as we are, there will be a new Franco-German war before the end of the century,” said Atali in a Wednesday interview with the TV channel BFMTV.

The future will show whether the scholars’ grim prognoses prove true. But there can be no doubt that we are confronting unsettled, if not stormy, times.