The following essay was first published in the regional daily Stavanger Aftenblad in Norway. Parts of the text were taken from Peder Jensen’s (Fjordman’s) book Vitne til vanvidd. This book is now available for a Scandinavian audience in Norwegian as both e-book and printed book. For a limited period of time, the printed book can also be ordered signed by the author. A shorter version of this book, which deals with the Anders Behring Breivik case and Muslim immigration to Europe, will later be published in English with the title Witness to Madness.

Many thanks to Liberty DK for the translation. 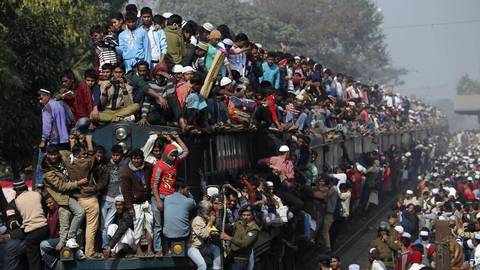 [Photo caption: Cramped seating on the train to Dhaka in Bangladesh. Population growth in the South is so enormous that even if the region managed to send 25 million people to Europe per year, its population would still be increasing. FOTO: Sheng Li, Reuters / Scanpix ]

Before the Neolithic Revolution began 10,000-12,000 years ago, we were all hunter-gatherers. The number of people on this planet at that time has been estimated to between five and fifteen million human beings. A single major city such as Tokyo, Beijing, Seoul, Karachi, Mexico City, Lagos, Mumbai or Cairo now has more inhabitants than this.

The global population reached one billion people for the first time around the year 1800. From the time of the Neanderthals, it took all of the Earth’s peoples hundreds of thousands of years to achieve this population size. Since the Industrial Revolution, the global population has, over the past two hundred years, grown dramatically.

“The world’s population is now growing at around one Roman Empire every year”.

In the coming three decades, it is expected that Africa’s population alone will increase by more than one billion people. Combined with a huge population growth, modern means of transport are now creating the largest and fastest human migrations the world has ever experienced since our species first came into existence.

Population estimates for the Roman Empire at the beginning of our era range from 45 million to over 100 million people. A relatively common estimate is 60-80 million. Various estimates suggested a global population growth of between 70 and 80 million in 2015. The world population is thus growing at a rate of roughly one Roman Empire every single year. Today’s migrations are much larger and faster than the Migration Period we associate with the fall of the Western Roman Empire.

“The population growth in Egypt in less than a generation is thus larger than the population of all the Nordic countries combined.”

Let us stipulate that the global population increased by 73 million people in 2015. This corresponds to a global population growth of over 6 million people per month, around 1.4 million people per week, nearly 200,000 per day, more than 8327 per hour, almost 139 per minute and 2.3 per second. If you spend 30 seconds on grabbing a cold drink in the fridge, the planet’s population will have grown with perhaps 69 people during this time. If you spend half an hour on eating lunch, there will be around 4,164 more human beings on Earth after your lunch break. 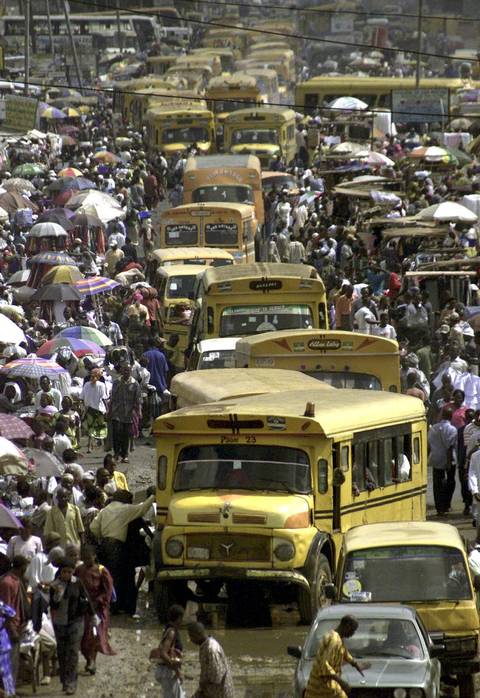 [Photo caption: The population of Nigeria is now approximately 182 million, compared with 89 million fifteen years ago, an increase of approximately 2.5 percent per year (CIA, The World Factbook). And four out of ten would move to a Western country if the opportunity arises. George Osodi, AP / Scanpix]

In the year 2050, the Democratic Republic of the Congo is expected to have joined Nigeria and Ethiopia as one of the world’s ten most populous countries. Despite stagnating population numbers in Europe and East Asia, analysts expect that the world population will increase by billions of people during this century. Demographers believe that the Earth’s population may grow to between 9.6 and 12.3 billion people by 2100, perhaps more. Africa’s population could grow tremendously to between 3.5 and 5.1 billion people. By 2050, it is estimated that four out of ten of the world’s children could be an African.

A large Asian country such as China has a bigger population than the entire European continent, including Russia. The same goes for India. Bangladesh and Pakistan grew by around 5.6 million people in 2014. The population growth of just two Muslim countries in a single year is thus large enough to overwhelm a small European nation. With its current demography, Pakistan will reach a quarter of a billion inhabitants within a generation and still keep on growing. Meanwhile, Pakistani immigrants to the West are sometimes referred to as a vulnerable “minority,” almost as if they were a rare rhino on the brink of extinction.

“A small rise in prosperity in the global South will not necessarily lead to less migration.”

Europe as a destination

Europeans are a global minority. We have always been a minority, but today, the European share of the world’s population is smaller than it has ever been in recorded history.

Let us stipulate that at least six billion people on the planet enjoy a lower standard of living than the average person does in Germany, Norway or the Netherlands. If just 9% of six billion people want to move to Europe or other Western countries, this would amount to 540 million migrants. This is more than the total number of citizens across the entire European Union (EU).

Polls show that four out of ten people in Nigeria would move to a Western country if given the opportunity to do so. If 40% of Nigeria’s fast-growing population want to migrate to the West, this would amount to at least 73 million potential migrants from a single African country, which is regarded as Africa’s economic superpower. Many of the world’s southern regions are now on the move, even in countries where there is no war. A small rise in prosperity in the global South will not necessarily lead to less migration. On the contrary, international migration could increase even further because more people have enough money to travel.

“There is no other viable alternative”

Could lead to collapse

These figures are intended to illustrate population growth. In practice, the number of migrants will not be this great. Yet the mere fact that this is theoretically possible should be cause for concern. In coming generations the Islamic world and Africa could, in principle, send a constant flow of migrants ten times larger than what we are seeing now. Even if they did so, this would not solve fundamental social problems in the Islamic world or in Africa. It would, however, probably cause a collapse of the social fabric in many European countries.

It is totally unrealistic to solve social problems through the migration of billions of people. Most social problems in southern countries must be resolved locally. There is no other viable alternative.

34 thoughts on “The New Migration Period”