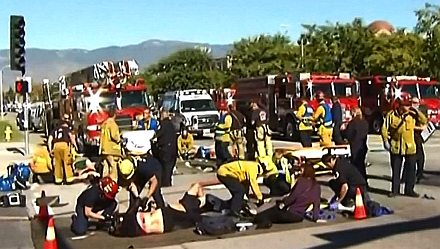 As you all know by now, there was a terrorist attack this morning at the Inland Regional Center in San Bernardino, California. Fourteen people were killed and seventeen (some reports say eighteen) wounded. The three attackers were able to escape the scene in a vehicle. Two were killed in a later shootout with police, and a third is in custody.

According to The Los Angeles Times, “a dispute at a holiday gathering may have sparked a mass shooting in San Bernardino that left 14 people dead and 17 others wounded on Wednesday morning, federal law enforcement officials said.”

The story is still breaking, and not all the suspects have been identified, so I can’t give you a Mohammed Coefficient for the incident yet. However, cultural enrichment is definitely involved.

Early reports said something along these lines (this one from KUSI):

The broadcast indicated there were unconfirmed reports the suspects were male and of Middle Eastern origin, “armed with AK-47s and wearing body armor.”

However, this paragraph has mostly disappeared from the news stories. If you’re paranoid, it’s been deliberately scrubbed, but it may also simply be the “fog of war”, with erroneous early information being corrected later.

Long before the chase and the shootout, there were reports from the Indian subcontinent that one of the suspects was named Farooq Saeed. From DailyPakistan:

Update: One of the suspects has been named by the local media outlets as Farooq Saeed and this may be the first of its kind case of domestic terrorism in America after 9/11.

Vlad Tepes has more, including information coming from Twitter. Breitbart recently reported a variant on the same name:

The Los Angeles Times reports that its sources indicate the lead gunman was a U.S. citizen.

And the latest is from the Daily Beast, definitively identifying the suspect of many spellings as Syed Farook:

CORONA, CALIFORNIA — Law enforcement officials have identified Syed Farook as one of the suspected shooters who attacked a center for the disabled in San Bernardino, California, according to NBC News. The Daily Beast has learned that the police have just executed a search warrant at a Redlands, California address–an address that belongs to Farook’s family.

Police pursued a car leaving from the Redlands address, Chief Jarrod Baraugan said at a Wednesday evening press conference. A male and female suspect were inside the car, and both of them have been killed. Both of the suspects were armed with assault rifles and handguns, Baraugan said. Police have apprehended a third man, but have not identified his relation to the attacks yet.

An eyewitness at the Inland Regional Center, where gunmen killed 14 and wounded at least 18 more, told police he saw a man leaving a meeting of county employees this morning. At 11 a.m., at least two men entered the center and opened fire.

A police officer radioed into dispatch a report from an eyewitness present at the center who told him that he saw Farook leave the event before the shooting, looking nervous.

Check out the above link to see the suspect’s selfie.

Excerpts and links from other media reports are below the jump:

From The Daily Mail:

San Bernardino Shoot-Out After 14 Die in Government Holiday Party Gun Massacre: One Suspect Killed, One Cornered and Another on the Run — All on Live TV

Two suspects are dead after a dramatic police shootout on a residential street in San Bernardino this evening as police closed in on the masked gunmen suspected of killing 14 and injuring another 17 at a conference center today.

San Bernardino police Sgt. Vicki Cervantes said two suspects are ‘being dealt with’ and there is still possibly another suspect ‘outstanding’ but would not elaborate further.

She said a police officer, who was the first to engage with the suspects, was hurt in the gun battle and is in hospital with injuries that are not life-threatening.

Armed police and armored vehicles were captured on live television surrounding a black SUV on San Bernardino Avenue — a mile and a half from the Inland Regional Center where the mass shooting occurred this morning.

A source told CNN that the suspects threw pipe bombs out of the windows of the vehicle before the shootout with police. The vehicle was captured on broadcast helicopters with its windows apparently completely shot out and a smashed windscreen.

Police are searching for up to three gunmen who killed at least 14 people at a social services centre in San Bernardino, California.

The gunmen, in military-style clothing, entered the building and opened fire before fleeing in a black SUV.

FBI officials said they do not yet know if it was a terrorist attack but local police said it might have been domestic terrorism.

14 Dead in Shooting at San Bernardino, California, Center for Disabled; 3 Suspects on Loose

Fourteen people are believed dead and more than a dozen injured Wednesday after three gunmen “on a mission” burst into a San Bernardino, Calif., social services facility where employees were hosting a holiday party, and police were hunting three suspects who appear to have escaped.

The men, who witnesses said were wearing body armor and masks, entered the Inland Regional Center just after 11 a.m. with grim precision, according to San Bernardino Police Chief Jarrod Burguan. Once inside, they opened fire with rifles, shooting people in a conference room where a holiday party was taking place, authorities said.

14 Dead, 14 More Wounded in San Bernardino; As Many as 3 Gunmen Believed to Have Fled Scene

At least ten of the injured are reportedly in critical condition.

The shooting was first reported at about 10:59 a.m. at the Inland Regional Center, 1365 South Waterman Avenue. The gunfire erupted in a conference room where the San Bernardino County Department of Public Health was holding a banquet, said Maybeth Field, president and CEO of the social services center. She said the building houses at least 25 employees as well as a library and conference center.

Authorities were still clearing the “massive facility” as of 2:15 p.m., Burguan said.

He added it’s believed the suspects — who were armed with long guns, not handguns — had fled, possibly in a dark-colored SUV.

Around 3:15 p.m. there was a report of a brief chase between law enforcement and possible suspects. Officers pointed their guns at the vehicle as it stopped not from the crime scene.

Sky9’s Stu Mundel reported that a “man was deceased” next to the vehicle. The vehicle was riddled with bullets. Officials did not say if the deceased was connected to the earlier carnage at the social services building.

At 3:35 p.m., Mundel listened to scanner traffic and reported that “all suspects” were accounted for; by 4:30 p.m. officials said one suspect was dead and another was at large.

An officer was reported down but apparently that officer only suffered a graze wound, according to reports from the scene.

SWAT officers made a methodical search house-by-house about five blocks from where police and the suspects exchanged gunfire.

At a 5:35 p.m. news conference, officials said two suspects — one male and one female — were dead and another suspect was in custody…

40 thoughts on “Carnage in San Bernardino”