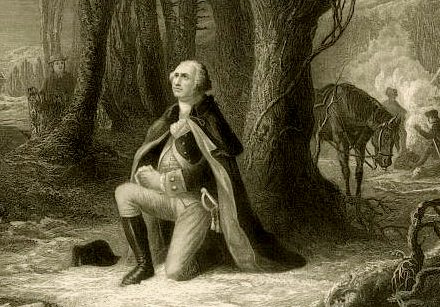 Happy Thanksgiving to our American readers!

And also to anyone anywhere else who happens to feel thankful today.

Dymphna and I are particularly thankful for the success of our quarterly fundraising appeal, which began a month ago today. We’ve finally wrapped up all the thank-you notes — boy, did that take a while — just in time to be thankful over today’s dinner.

All the notes except for one, that is. During the fundraiser someone sent us a cash donation by snail-mail. The envelope was blank except for our address and a postmark (California, if I recall correctly), and the cash was wrapped up in a photocopy of a famous picture of George Washington at Valley Forge. No note, no signature — nothing else. We’ve misplaced the paper, but I believe it was a version of the image shown at the top of this post.

So, to our mystery donor, whoever you are: Like General Washington, I bend the knee to you in gratitude on this Thanksgiving Day of 2015.

DYMPHNA HERE: Anyone who donated to Gates of Vienna but did not receive an acknowledgment, please let us know. It’s bad karma to fail to thank someone who has gone through the trouble to help the cause.

A side note: As you all know, this blog has a strong European focus. We cover American and Canadian issues (and even Australian or Indian issues from time to time), but the bulk of our material concerns Europe. The last time I investigated the origins of our traffic, the total number of European readers was about the same as the number of American readers.

For some reason, however, our financial support comes predominantly from readers in the United States. European and Canadian readers are also gratifyingly generous, and the Australians are magnificent. But American donations form the bulk of what we receive.

Does anyone have an opinion to why this is? Are Americans better off? Or is it that the USA still has a philanthropic culture, which social-democratic Europe has largely lost? Or is there some other reason?

I don’t know the answer, but I’m very grateful to everyone who decides to support our efforts financially. Godspeed to you all — even those who don’t believe in God!

19 thoughts on “Gratitude for Plenitude”